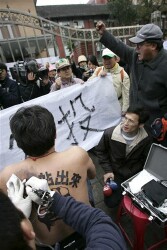 Demonstrators protest US beef in Taipei on Tuesday. The tattoo says, "Taiwan people stand up!" (AP photo by Wally Santana)

Taiwan’s legislative Yuan Tuesday banned the sale of US beef to that island country, a move that infuriated US beef exporters and could lead to trade disputes with the United States.

The "Food Sanitation Act" was amended to officially ban trade of six types of beef parts from countries that have documented cases of Mad Cow Disease within the last decade. The banned products include ground beef, skulls, intestines, and "offal," which includes hearts, livers, and lungs.

Taiwan President Ma Ying-jeou, who opposed the ban and lifted restrictions on US beef last October, feared the new policy would adversely affect Taiwan’s trade with the United States. Taiwan is particularly concerned about the upcoming sale of US military equipment including Blackhawk helicopters. Ma, however, said the vote reflected public opinion and should be respected. Distrust of US beef products is high among Taiwan’s population whether or not the fear is based in science.

Representatives of the National Cattlemen Beef Association (NCBA) were clearly annoyed by the decision. Chief economist Gregg Doud called it “outrageous” for Taiwan to suggest that US beef was a threat. "US beef producers are sick and tired of being used as political football,” he said. Dan Roggenkamp, a long-term resident of Taiwan, explained that Taiwanese politicians like to exploit the issue because it gives them the appearance of doing something without upsetting local interests.

"US beef is a safe target for local politicians who tend not to protest local food and environmental hazards," Roggenkamp told the Examiner. "So it’s a gift to politicians because it allows them to be seen to be protecting the local population without them having to actually step on local toes."

Premier Wu Den-yih said he thought the new policy might cause some short-term friction with the United States but that it would be limited to trade issues and not affect arms deals. Wu has said he believes the Taiwan Relations Act passed by the US in 1979 will prevent the beef conflict from jeopardizing arms sales to Taiwan. The Act basically pledges to protect Taiwan and "provide [it] with arms of a defensive character."