Health concerns and angry protests have prompted partial bans on US beef imports in Taiwan, Japan, and South Korea – most recently by Taipei on Tuesday. The recurring dispute has strained relations. 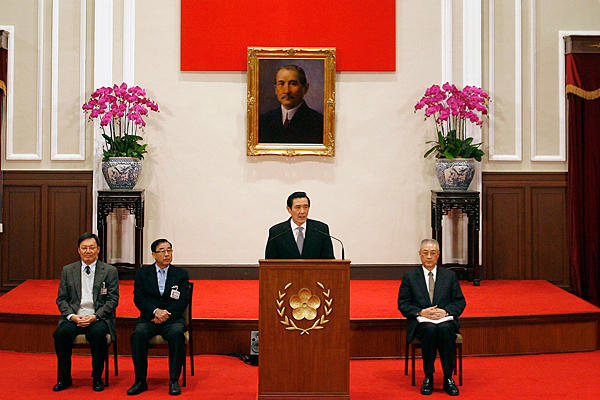 Taiwan President Ma Ying-jeou (c.) and government officials talk about the amendment of the safety law to ban US beef imports in Taipei on Tuesday. (Pichi Chuang/Reuters)

In recent years US beef imports have become a lightning rod in East Asia, due to a potent mix of health concerns, nationalism, and political opportunism.

Beef has become a measure of whether governments are viewed as standing up for citizens’ health or buckling to US pressure, says Koji Murata, a political science professor at Japan’s Doshisha University.

"For junior partners of the US such as Japan, South Korea, and Taiwan, this issue is a kind of symbol –of course, an exaggerated one – of American oppression," he says.

The move by Taiwan’s legislature comes amid fears of mad cow disease, and criticism that President Ma Ying-jeou’s government failed to consult the legislature or the public before lifting a partial ban on US beef in October.

The issue has strained Taiwan’s ties with the US, even as the self-ruled island moves ever closer into China’s economic orbit with a series of cross-strait commercial deals.

Taiwan legislators reached a consensus last week to revise a food law to ban the import of US ground beef, offal, and other beef products seen as posing a greater health risk.

That drew unusually harsh criticism from Washington, which accuses Taiwan of overturning an October deal that was signed after extensive negotiations and study.

"Science and facts – not politics or hyperbole – should govern our trade and economic relations," US trade and agriculture officials said in a statement. "This is a serious matter that concerns us greatly."

Japan banned US beef imports in late 2003, after a single cow in the state of Washington was found to have mad cow disease. South Korea, Taiwan, and other Asian countries quickly followed suit. US beef exports plunged, hit especially hard by the ban in the No. 1 export market, Japan.

Japan reopened to some US beef imports in 2006, but restrictions remain.

South Korea’s reopening to beef in 2008 under a US-friendly president sparked weeks of massive protests and a political crisis that had a nationalist, anti-American edge. Seoul ended up watering down a previous agreement with Washington, much as Taipei is doing now.

Park Kie-Duck, former president of South Korea’s independent Sejong Institute, says anti-US beef protests were led by Web-savvy students who spread fears online. But the issue has resonated more broadly in East Asia because of countries’ worry that their traditional agrarian identities are under threat.

"We see the agricultural industry as a kind of strategic industry, and people want to keep that industry safe," says Mr. Park. "That’s why this issue is so sensitive."

In Taiwan, the scale of protests has been smaller, but emotions have also run high. Groceries and beef noodle restaurants have displayed anti-US beef logos.

On Tuesday, a man had the words "The people stand up" and a clenched fist tattooed to his back amid chanting anti-US beef protesters.

In late October, one student filmed himself eating what he claimed was a cow-dung burger in front of the Presidential Office, protesting that it was safer to eat than American beef. (See videoclip here.)

Lin Chong-Pin, a professor of strategic studies at Taiwan’s Tamkang University, says resentful legislators from President Ma’s own party had seized the beef issue to teach Ma a lesson.

US officials insist American beef is safe (see their factsheet here). They cite a 2007 World Organization for Animal Health decision, which said the US had appropriate measures in place to assure the safe export of its beef.

But the US has been embarrassed by export violations by its beef producers. Japan relaxed restrictions in 2006, only to renew them after banned bone parts were found in one shipment.

Last October, Japan banned beef imports from one meatpacking plant in Nebraska after banned parts were found in another shipment.

Such incidents have fueled distrust. "The perception is that the Americans are very sensitive to the import of Asian manufactured goods to the US but insensitive to exports of potentially dangerous food goods to Asia," says Doshisha University’s Murata.

Washington has linked the beef issue with progress on a South Korea-US free trade deal – now languishing in Congress – and trade liberalization talks with Taiwan.

Those talks have been suspended since 2007, and observers say they may be further postponed over the latest beef controversy.