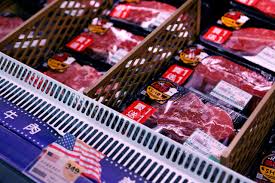 Taiwan is set to open an economic dialogue with the U.S. as early as next week, it was learned Friday, laying the groundwork for talks on a free trade agreement while the island unwinds cross-strait economic integration with Beijing.

Taiwan’s Ministry of Foreign Affairs said that discussions are underway for a visit by Keith Krach, U.S. undersecretary of state for economic growth, energy and the environment. The trip is slated for Sept. 17 to Sept. 19, according to Taiwanese media.

Taipei hopes for cooperation on semiconductors and fifth-generation wireless networks, bolstering ties with the U.S. with an eye toward long-stalled negotiations on a bilateral free trade agreement.

A U.S. trade deal is high on Taiwanese President Tsai Ing-wen’s agenda. Last month, Tsai said her administration would ease restrictions on imports of U.S. beef and pork starting in January, removing the largest remaining barrier to a deal.

"Taiwan-U.S. relations are at their strongest level in decades," she said, adding that "this is an ideal opportunity for Taiwan’s economic and trade development."

David Stilwell, assistant U.S. secretary of state for East Asian and Pacific affairs, said in an Aug. 31 speech that Washington and Taipei are "establishing a new bilateral economic dialogue."

A shift away from China is already under way. Taiwanese companies have invested nearly $30 billion on the island since 2019, five times their spending on the mainland, amid a reshoring drive.

Taiwan Semiconductor Manufacturing Co., the world’s largest chip foundry, in May picked the U.S. for the site of its first advanced fabrication facility outside the island. Hon Hai Precision Industry, also known as Foxconn, began mass-producing Apple’s iPhone 11 in India this year.

This trend marks a drastic shift from the Taiwan-China relationship of a decade ago. The Economic Cooperation Framework Agreement, which essentially acts as a free trade deal between Taiwan and mainland China, went into force Sept. 12, 2010. Ma Ying-jeou, Taiwan’s president at the time, had pushed for stronger cross-strait relations.

Under the ECFA, China initially reduced tariffs for 539 Taiwanese products, such as plastic goods, while Taiwan cut duties on 267 exports from the mainland. At the time, the deal applied to 16% of Taipei’s exports to Beijing, or $13.8 billion, as well as 11% of China’s exports to Taiwan, valued at $2.8 billion.

Yet those turned out to be the first, and last, fruits of the deal. The agreement called for an expansion of the accord somewhere down the line, but for the past decade, China has made no concessions for that to happen.

The agreement now covers less than 5% of the island’s exports to China by value, Taiwan’s Ministry of Economic Affairs estimates. For China, Taiwan occupies only 5% of all trade.

Taiwan increasingly grew suspicious that the agreement served as a tool for China to take over the island. Ma tried to push through an expansion of the ECFA in 2014, but student protesters occupied the Legislative Yuan and shut down deliberations.

In China, some radical voices have called for scrapping the ECFA, as one party can end the deal unilaterally through a notice.

But "the abandonment of the ECFA [by China] would further sever the ties with Taiwan," said Fan Shih-ping, professor at Taiwan National Normal University. "China can’t make that decision since its goal is unification."