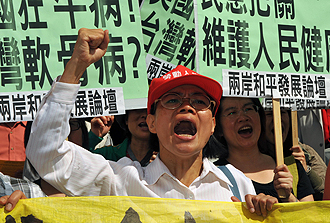 Taiwan’s decision to relax curbs on US beef on the bone and cow organs last October sparked controversy due to concerns over mad cow diseases. (Photo: AP)

TAIPEI — Taiwan is negotiating a closer relationship with its onetime enemy, China, while its ties with Washington are being strained by the island’s new proposed ban on U.S. beef.

The U.S. Department of Agriculture and the Office of the U.S. Trade Representative Wednesday expressed concerns after Taiwan’s parliament proposed an amendment to the country’s Food Sanitation Act that would bar imports of some U.S. beef products.

"We are deeply concerned and disappointed by reports that Taiwan’s Legislative Yuan has taken initial steps toward the passage of ... provisions that would unjustifiably bar the import of certain U.S. beef and beef products," the U.S. statement said.

On Tuesday, parliament proposed to reinstate a ban on some U.S. beef products due to fears about mad-cow disease.

The amendment is scheduled to be voted into law on Jan. 5, likely overturning President Ma’s October decision.

In response to the proposed ban, the Presidential Office said the administration would continue lobbying lawmakers against the amendment, and would send a delegation to Washington to contain fallout from the proposed ban. But reversing the bill, which was jointly endorsed by the ruling Kuomintang and the opposition Democratic Progressive Party, might not be possible, Presidential Office spokesman Wang Yu-chi said.

Officials in Washington said that after the protracted talks that led to the October lifting of the ban, Taiwan’s likely unilateral reversal would damage its credibility.

"The Taiwan authorities should consider very carefully the impact that passage of the amendment in its current form would have on Taiwan’s reputation as a reliable trading partner and responsible member of the international community," the U.S. statement said.

The trade friction comes as Taiwan is working to improve trade ties with China. The two recently started negotiations on a free-trade pact.

Since the October bid to lift the beef ban, protesters concerned that U.S. beef imports could bring in mad-cow disease have staged rallies and demanded a referendum on the issue. In response to public fears, the government has repeatedly reassured the Taiwanese people that U.S. beef is safe, while suggesting that those concerned shouldn’t eat U.S. beef.