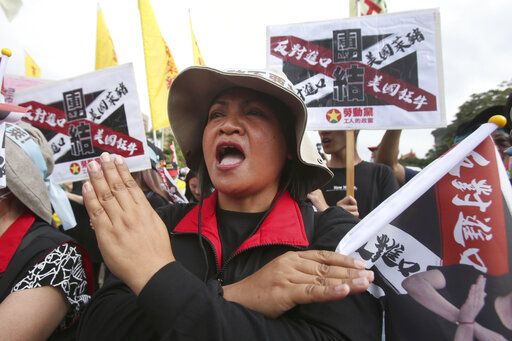 A bilateral trade deal between Taiwan and the United States would reinforce U.S. support for the democratic island in the face of “unrelenting intimidation” from China, Taiwan President Tsai Ing-wen said on Friday.

Taiwan, claimed by China as its own territory, has long angled for a trade deal with its most important diplomatic and military backer, and in August Tsai announced a relaxation on imports of U.S. pork and beef, removing a stumbling block.

In a recorded message to the American Legislative Exchange Council, having received its International Pioneer Award for Leadership, Tsai said that with Taiwan’s reliance on trade, the island had to strengthen economic ties with trading partners.

“Therefore, I look forward to making progress on a bilateral trade agreement with the United States, our second-largest trading partner and most important security ally,” she said.

Tsai said she was thankful for bipartisan support from U.S. politicians for such a deal.

“Such an agreement would further enhance our close economic and trade partnership, and also reinforce America’s support for Taiwan in the face of unrelenting intimidation from across the Strait,” she added.

China has ramped up its military activities near the island, including on occasion flying fighter jets over the sensitive mid line of the Taiwan Strait, which serves as an unofficial buffer between the two sides.

Tsai said she would “never stop seeking a peaceful and stable cross-strait relationship”, but that she would also not compromise when making decisions needed to keep Taiwan secure, noting rises in Taiwan’s defence budget.

While outgoing U.S. President Donald Trump remains a popular figure in Taiwan for his administration’s championing of the island, including new arms sales and visits to Taipei by senior U.S. officials, Taiwan has expressed confidence President-elect Joe Biden’s government will continue that support.

Tsai alluded to the incoming administration, saying: “As we move towards 2021, the Taiwan-U.S. partnership holds enormous opportunities for growth”.