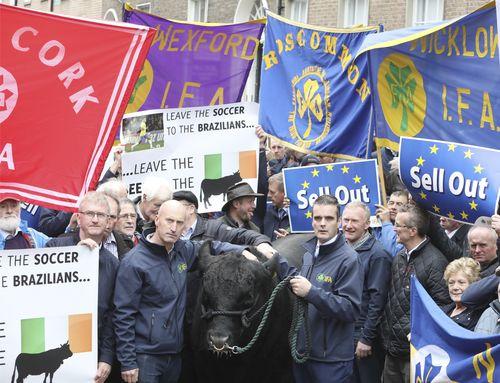 EU Commission officials are in Montevideo in Uruguay this week to reconvene the trade talks with the Mercosur trading bloc.

EU resistance to open access to some Mercosur food exports remains a central obstacle to completing the long-delayed agreement that has been under negotiation since 1995.

Brazil’s Foreign Minister recently said he did not see any chance of altering the quota offered by the EU commission for imports of Mercosur beef of 99,000 tonnes a year, which is less than the European offer made in 2004. But Mercosur insists on that quota entering tariff-free.

The same goes for Mercosur sugar, which will have a 150,000 tonne per year quota but must still pay a tariff of 98 euros per tonne, which would make it hard to compete in the competitive European sugar market, Nunes said.

“If they offer us a quota, it should be a real quota free of tariffs, not a fictitious quota,” he said.

Joe Healy said, “With major uncertainty over Brexit and only contempt being shown by Brazil in their failure to meet EU standards on imports, the time has come for Commission Hogan to shout stop on Mercosur”.

Joe Healy said EU Commission President Jean Claude Juncker and Agriculture Commissioner Phil Hogan must deliver on their commitment to put Ireland first in Brexit and ensure that there is no Mercosur deal on beef while Brexit remains unsorted.

The IFA President said the Mercosur negotiations lack credibility and are taking place against a background where there are major political scandals and unrest in Brazil and economic meltdown in Argentina.

He said these are the big two Mercosur member states the EU are relying on to pull off a deal. “Elections are set to take place in Brazil in October against a background of massive political corruption, deep economic recession and rising unrest”.

The IFA President said the economic collapse in Argentina has seen the currency devalue in the last 12 months from 20.25 ARS to the Euro down to 44.98 ARS last week.

"This is a devaluation of 125pc and shows how ludicrous it would be for the EU to agree to any type of a trade deal with such an unstable economy.

"He said with this type of devaluation Argentina could flood the EU with cheap substandard beef and other agricultural products. In addition he said the Brazilian real (BRL) has devalued by 33pc from 3.68 to 4.90 against the €uro in the last year and the Uruguayan Peso (UYU) has devalued by 12pc from 33.80 to 37.80 to the €uro," he said.