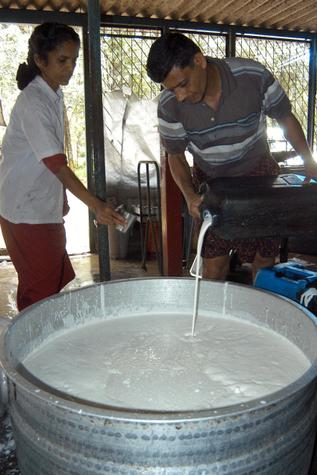 The iniquitous perils of the free trade pact

Kerala’s rubber sector, in particular, will vanish if the free import of rubber from outside India under the FTA is allowed. Pepper, coconut, plantation products and similar commodities which form the backbone of Kerala’s economy will die, too.

This is a statement sent in by V.R. Krishna Iyer, a former Judge of the Supreme Court, who is based in Kochi:

Some of the provisions of the Free Trade Agreement (FTA) that India recently signed with the Association of South East Asian Nations (ASEAN) will weaken India’s, and specifically Kerala’s, rubber sector because Malaysia and a few other countries that are a part of the ASEAN will flood the market with their rubber and push Indian rubber out. Kerala’s rubber sector, in particular, will vanish if the free import of rubber from outside India under the FTA is allowed. Pepper, coconut, plantation products and similar commodities which form the backbone of Kerala’s economy will die, too.

When Chinese tyres offered at fabulously cheap rates threatened the American tyre industry, President Barack Obama imposed 30 to 40 per cent duty on the import of tyres in order to save the American tyre industry. The same Obama strategy of imposing heavy import duties to protect the farmers of the State ought to be instantly imposed here. And to that extent, the ASEAN agreement should be made subject to nationalist conditions.

I protested as part of what was called a human chain against the FTA that was organised across Kerala on October 2, out of concern for swaraj, agriculture, and the peasants and workers of Kerala. Why not copy Mr. Obama in this matter: India is readily adopting America in many other matters, after all.

Manmohanomics should not lag behind Obama economics. Sri Lankan coconuts will be sold in Kerala cheaper than Kerala coconuts. That will be a disgrace. First your country, dear Manmohan Singh, the great economist, and then Asia.

A friend drew my attention to a Government of India advertisement giving details about how protection would be given to Indian products and stating that the FTA would not in any manner harm Kerala’s economy, which is hugely dependent on agricultural and fishery products. For a casual reader and lay citizen, this may seem to take care of the interests of Kerala’s peasantry and fishermen. So I discussed the issue in some detail with T.M. Thomas Isaac, Kerala’s Finance Minister — who is an intelligent economist in his own right — who seemed to convince me that the advertisement was but a piece of misleading exaggeration, that Kerala’s peasants are certain to suffer and that the alleged industrial benefit involved is dubious. Indeed, in a federal polity such as this republic’s, the spirit of the Constitution requires the Government of India to discuss such matters thoroughly with the State governments that will be affected. This has not been done. The financial domination of the Union government has forsaken the federal nature of the Indian economy. It is unfortunate for the Union Finance Ministry to play an imperial role, indirectly invading the interests of Kerala’s peasantry and ignoring the soul of India’s federalism.

It is not dogmatism but debate that is the desideratum in a federal set-up. Even now, why not call the State Finance Ministers and the country’s leading economists for a discussion and intensive invigilation and scrutiny of the implications of the ASEAN treaty for the economy, and also seek the views of the cultivators? Let us not let down the country’s Founding Fathers in their vision and swaraj mission.