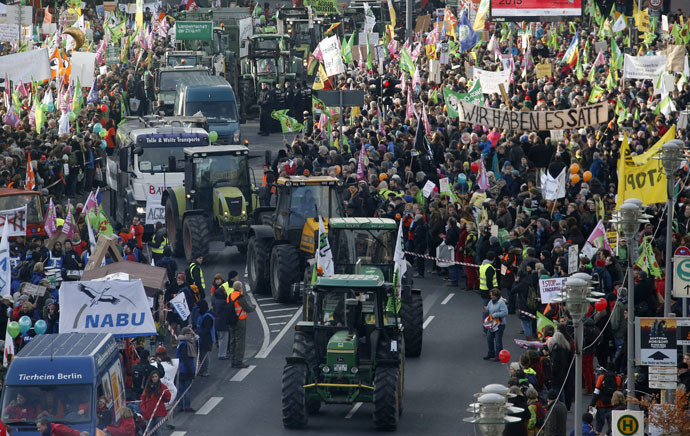 The perfect pinta vs. the TTIP trade tanker

Britain’s dairy farmers have been having a hard time, writes Vicki Hird, largely thanks to their exposure to an unregulated, unstable, global food market. But if the EU’s TTIP ’trade deal’ with the US is ever signed, pitting UK dairy farmers against zero-welfare US mega-dairies run on hormones and antibiotics, they won’t have a chance.

It’s clear farmers are up for a protest with something louder than placards about ’every day’ low prices for their milk.

Alarming headlines such as "Milk cheaper than water", "Dairy farmers state of emergency", filled the media.

In reality, dairy farmers are in a dire situation. Over the past year alone, nine dairy farmers went bust each week (a loss of 421 dairy farmers). Sadly, the outcome of their protest is likely to be weak.

Fragile or empty promises from a food industry structurally incapable of delivering a sustained fair deal to farmers here or overseas and limp statements from a Government disinclined to upset big food businesses.

Also looming over farmers is the threat of more and cheaper US dairy imports produced at lower standards under the new trade agreement - the Transatlantic Trade and Investment Partnership (TTIP) - currently being negotiated between the US and EU. Farmers have already raised alarm bells at the risk - including the National Farmers Union.

A wider crisis in food

Headlines and short lived price promises aside, it is clear that farmers (and consumers) are stuck in an impossibly unfair system. And they have been for decades.

Farmer protests - often involving manure or pallets full of peaches dumped on ministry doorsteps - have long been a common sight in Europe as farmers resort to desperate tactics to try and gain attention for their plight.

Thousands of small businesses (farms) are stuck in one end of an hourglass and millions of consumers in the other end with a tiny handful of supermarket buyers and dairy companies in control the middle. To extend the comparison, the hourglass gets shaken regularly as the global price for dairy commodities is managed by a handful of multinational corporations.

Shifts in global demand add the final uncertainty to the market. China for instance has created a dairy industry of its own so buys less of ours. Russia’s sanctions against EU farm imports have also wiped out what used to be a major export market for dairy and other produce.

Somewhere in all this complex system, ordinary farmers (and their animals) get left behind. As a result they are forced to sell up, so bigger farms are created which have to produce more and sell it for a lower price; pushing the land and animals ever harder to gain even less of the food pound.

We can buy cheaper produce but at a hidden high cost to public health, pollution of natural resources, rural decline and severe hardship for farm communities here and overseas.

The true extent of corporate control of food commodities - or milk to you and me - is huge. They don’t just want to have a say in the global price. They work hard to influence how food is produced. They want cheaper raw materials from wherever they can get them. TTIP may deliver..

New trade rules - in whose interest?

It is these largely unaccountable bodies that will benefit from trade negotiations like the Transatlantic Trade and Investment Partnership (TTIP). Anxious to weaken food regulations by ’mutual recognition’ of different standards or ’harmonizing’ standards to the ones they like, they are very active in the TTIP debate.

As noted by The Ecologist, in food that means pushing to end food border inspections, controls on chemicals, antibiotics and hormone use in livestock production, and allowing GM crops. US meat and dairy industries are pushing to eliminate or weaken animal welfare standards that they say are ’barriers to trade’.

In dairy it’s all about animal health and milk quality. The US dairy exporters would like to see EU limits on somatic cell counts (in effect, pus) in milk removed - yet the cell count indicates mastitis, a painful infection of the breast tissue in cows. The EU standard requires better herd health so lessens the likelihood of herds being unhealthy, but means higher costs.

Protecting consumers, farmers, the environment and animals is central to a resilient, safe and healthy food system. War on Want advocates a new way to manage our food system - based on food sovereignty - an alternative food system that creates practical, sustainable and democratic solutions to the failed industrialised food model.

But if farmers, like those dairy farmers, are unable to make a living and the very companies that are squeezing them to oblivion are setting the rules in a new trade treaty, our food system will go downhill faster than M&S can push a cow out of the chilled yogurt section.