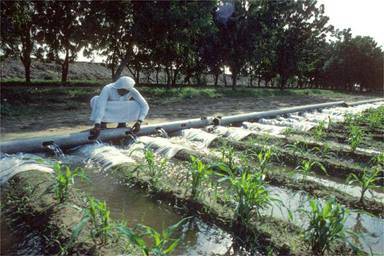 If water, or support services for agriculture, are not specifically enumerated on the list of exemptions set out when the treaty is signed, they will be impossible to protect.

The IUF, Public Services International (PSI) and Uni flagged the extreme dangers of the proposed Trade in Services Agreement (TISA) at the WTO Public Forum in Geneva on October 1. Over 100 participants - many of them trade delegates - took part in the meeting.

"TISA" said PSI’s Daniel Bertossa, "will deregulate financial services, liberalise the public sector and restrict democracy in our countries. Stephen DeMatteo of Uni warned that TISA "would export a failed model of postal liberalization to peoples around the world without their ever having a say or ever casting a vote."

Privatization and deregulation undermine the right to food, a fundamental human right, by encouraging and enforcing the commercialisation and privatisation of water supply and distribution, warned Peter Rossman from the IUF. "Agriculture urgently needs rebuilding to become socially and environmentally sustainable ; TISA and similar deals take us in the opposite direction by facilitating the corporate appropriation of public resources and closing policy space."

The IUF presentation is available here.

The TISA Threat to Food and Agriculture

The IUF approach to TISA as to any other trade agreement begins with the right to food, which is a basic human right. All human beings have the right to adequate, safe, nutritious food at affordable prices. This right is established in international human rights law and governments are obliged to defend that right and to act to assist in its realization. In principle their international human rights commitments prohibit them from signing any agreements which threaten this right. TISA and service liberalization generally undermine this right, in the first instance by encouraging and enforcing the profit-driven commercialization and privatization of water supply and distribution. According to a report issued by the UN Human Rights Commissioner over a decade ago, the right to water includes the right not to be excluded from water services and to protection against unaffordable price increases. Human rights obligations, however, did not stop the European Union from making GATS requests to over 70 countries to open their markets to water collection, purification and distribution, all of which impact directly on food. And we can expect demands for similar commitments with TISA.

Most of the debate and the struggles around the privatization and deregulation of water services has focused on urban water provision : over the past 15 years some 90 municipalities, in rich and poor countries, have taken water services back under municipal ownership or control in response to deteriorating service and water quality and rising rates. This reassertion of public control has brought them into conflict with provisions of trade agreements, in some cases exposing them to investor-to-state lawsuits resulting in punishing sanctions.

What is often forgotten or ignored is that 70% of all fresh water consumption, and up to 80% in developing countries, takes place in agriculture. The link between water and food production becomes critical when we consider the growing crisis of water scarcity. Water scarcity affects more than a billion people dependent on agriculture for their livelihoods, just under half of whom are waged agricultural workers and among the world’s most food insecure. Water scarcity means food shortages and hunger.

Food producers – farmers and workers – face increased competition for water resources at the same time as the quality of water continually deteriorates under the impact of high-input, intensive agricultural practices which are exhausting and polluting fresh water supplies and driving the climate change which puts further stress on water supplies. So the right to food is inseparable from the right to water and the sustainable management of water resources. And we cannot forget that agricultural workers often live where they work – the absence of potable water is an immediate threat to both their livelihoods and their health.

Agriculture urgently needs rebuilding to achieve food security, and rebuilding a failed food system requires the resources and the policy space which are precisely the target of agreements like TISA. Opening up water resource management to transnational investors will undermine the fight for sustainable agriculture by raising the cost, lowering the quality and reducing and diverting water service away from where it is most needed to encourage sustainable farming methods. Deregulation promotes consumption by the most environmentally destructive users. These users – monoculture producers producing increasingly for export – are also the major sources of soil and water pollution.

In addition to the scandalously undervalued labour embedded in food, water is not the only service essential for food production. Agriculture depends on a whole complex of support and extension services – credit, research, testing, marketing – many of which are still provided by governments. These too can and will be opened up by TISA, further undermining food security and sustainable agriculture. Water may enter TISA through the “environmental services”, or it may find another way in. At this point we simply don’t know, but we do know that service corporations are frustrated with the slow progress at GATS and that water is a major corporate ambition. If water, or support services for agriculture, are not specifically enumerated on the list of exemptions set out when the treaty is signed, they will be impossible to protect, not to speak of new needs and new policy responses essential to food security which may arise in the future. “Standstills” and “ratchet effects” means there is no turning back.

Agriculture has become more volatile as it increasingly depends on international financial circuits, yet TISA would restrict governments’ scope and capacity for financial regulation. Efforts to curb speculation and limit volatility in commodity markets, including food, will be designated “barriers to trade in services” ; financial support for services to promote sustainable agriculture would constitute “illegal subsidies.”

TISA can impact on food and food quality in many other ways. Thousands of people die each year in the US, and millions are sickened, as a result of food-related illnesses, yet the EU is proposing the “mutual recognition”of food safety and other standards in the negotiations around the TTIP in the drive for “regulatory convergence”. Food inspection and testing services – essential public services – could become candidates for privatization.

The GATS negotiations have failed to advance and the WTO Doha Round negotiations are also bogged down, perhaps terminally – notably over the issue of food security. This is why we have the new mega-treaties, including TISA. They are all ‘WTO plus’, and they concern everyone, because the escalating requirements brought on by each new treaty immediately have a wider impact. This can come about through application of MFN, pressure to sign on to new BIT/FTAs, or multilateralizing TISA through the WTO. The web of treaties becomes progressively denser and more restrictive. The multilateralism that we would seek – one which secures the right to food, for instance – is a rights-based multilateralism which is incompatible with TISA and the agreements it builds on, and for that reason we oppose it.