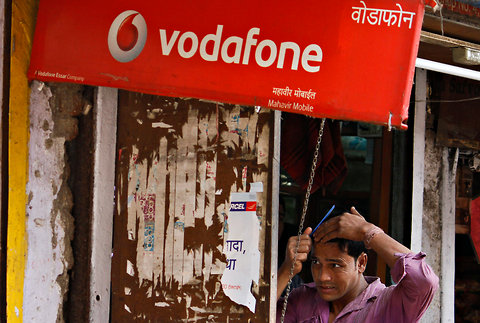 A man combs his hair beside a Vodafone India Ltd. advertisement in Mumbai, Maharashtra in this Feb. 3, 2012 file photo. Dhiraj Singh/Bloomberg

The treaty that could decide the Vodafone india tax case

As the British telecommunications company Vodafone Group and India’s finance ministry edge ever closer to a full-blown confrontation over taxes related to Vodafone’s $11.1 billion acquisition in India, a key issue may be the India-Netherlands Bilateral Investment Treaty, signed between the two governments in 1995.

The 10-page treaty pledges “to strengthen the traditional ties of friendship between their countries, to extend and intensify the economic relations between them,” particularly when it comes to acquisitions that a “contracting party” in one country makes in another.

Vodafone said in an April filing with the London Stock Exchange that its Dutch subsidiary, Vodafone International Holdings BV had served the Indian government with a “Notice of Dispute” invoking the treaty, which is the first step towards demanding international arbitration over the issue. The deal was technically done between Vodafone’s Dutch subsidiary and a Cayman Islands company that controlled the Indian operations of Hong Kong’s Hutchison Whampoa.

India’s finance ministry contends that the treaty does not apply. “The deal is not held in Holland, it was done in the Cayman Islands,” explained D.S. Malik, the ministry’s spokesman, in an interview.

Here are some potentially relevant articles of the India-Netherlands treaty:

The treaty also lays out rules of arbitration. Any issue that cannot be solved by negotiation between the two parties after six months can be referred to a three-person arbitration body made up of one person each side has selected, and a third person from a third country who is selected by the first two arbitrators.

The tax battle between Vodafone and the Indian finance ministry hinges on an amendment to the Income Tax Act proposed during this year’s budget, which would retroactively tax acquisitions involving companies or assets in India. The amendment was approved by the Lok Sabha, or lower house of Parliament, this week.

In a front-page story that cited unnamed “finance ministry officials” the Economic Times said Thursday that other deals “under the scanner” include SABMiller’s acquisition of Foster’s India in 2006; Vedanta Group’s 2007 acquisition of a controlling stake in Sesa Goa and an internal deal between two Unilever subsidiaries that involved shares of Hindustan Lever, the company’s Indian arm. Tax notices have already been served to these companies, the article said. SABMiller and Unilever declined to comment.

The finance ministry spokesman said Thursday that it was premature to single out particular deals for retroactive taxation. “The bill needs to be approved in the other house,” Mr. Malik said, referring to the upper house of Parliament. “After that only the department will decide the position on these deals.”

Tax experts in India predict that the authorities could cast a wide net when applying the amendment. “The income-tax authorities have only looked into a dozen or so until now,” said Dinesh Kanabar, deputy chief executive and chairman of tax at KPMG India, who has represented Vodafone on the India tax issue. “They have not yet gone all out, but my guess is that many more will be discovered as we go along.”

“In each of these cases the stakes involved are fairly significant,” he said. If a foreign company has operations in India that are significant in relations to the overall value of the company, “then the overseas company will be regarded as a company in India,” he said, and an acquisition of that entity’s shares will be regarded as a transfer in India and will be taxed accordingly.