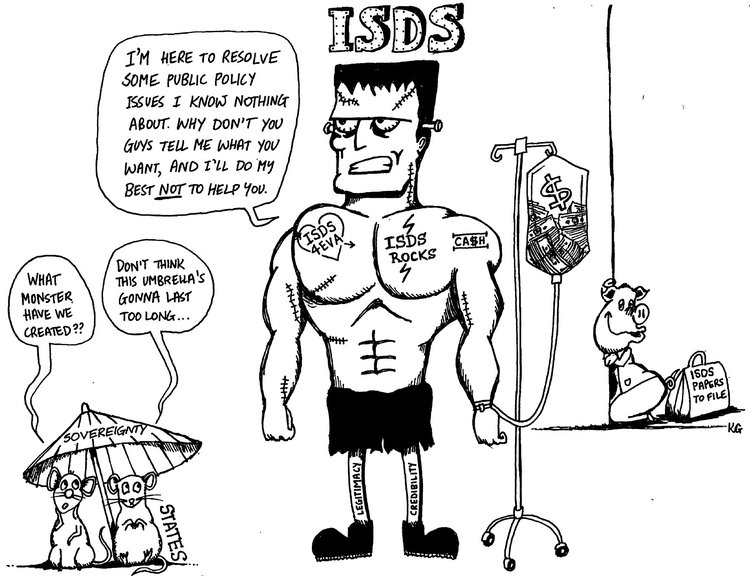 The Trump administration recently renegotiated NAFTA, and Donald Trump is now threatening to revoke the trade treaty in effect among the United States, Canada and Mexico since 1994. The replacement treaty — the United States-Mexico-Canada Agreement (USMCA) — is pending approval from Congress.

The USMCA resembles NAFTA in some ways but takes a strikingly different approach to dispute settlement. The proposed USMCA provisions are far more limited than NAFTA’s Chapter 11, which allowed investors to sue foreign governments directly over allegations of noncompliant policies.

Such investor-state dispute settlement (ISDS) clauses are common in international trade and investment treaties — and are a controversial topic with many U.S. lawmakers, business and civic organizations and analysts. But our research, which looks at ISDS clauses in bilateral investment treaties in 105 developing countries between 1981 and 2009, suggests that such clauses may hurt the United States far less than it will hurt countries in the developing world.

Why the controversy on ISDS provisions?

It may seem strange that governments would accept ISDS provisions in the first place — after all, this means that foreign firms can sue governments for discriminating against them, expropriating their assets or breaking contracts. But ISDS clauses may also encourage much-needed investment, by allaying businesses’ fears about political risk.

Many Republican lawmakers oppose ISDS provisions because they appear to limit national sovereignty. Democratic lawmakers such as Sen. Elizabeth Warren (Mass.) have also spoken up against ISDS provisions for a variety of reasons, including concerns that these rules are arbitrated by corporate lawyers and would favor multinationals’ rights over the taxpayers, citizens’ health or the environment.

In a high-profile and controversial ISDS case, a Hong Kong subsidiary of Philip Morris International, a U.S. company, used a Hong Kong-Australia trade agreement to challenge the Australian government’s ban on cigarette advertising. Philip Morris lost that case and had to pay court fees.

Research suggests that ISDS provisions are likely to have a chilling effect on domestic environmental and health regulation. Our analysis, however, suggests that ISDS has even greater effects on developing countries’ politics, including the impact on taxation, labor rights and human rights. Here’s what you need to know:

First, ISDS allows multinational corporations to sue the government in an international tribunal — giving them a big competitive advantage over domestic firms, which have no such rights. And when multinationals do better on domestic markets, they make more money. This means that revenue that used to go to domestic businesses now goes to the multinationals, which typically find it easier to shift assets abroad — making it harder for the host government to tax the subsidiary’s revenue. Our research suggests that tax revenue goes down in countries with a lot of ISDS-protected foreign direct investment.

In addition, ISDS-containing treaties often also include “umbrella clauses.” Umbrella clauses allow multinational corporations to use ISDS to enforce the terms of separate side agreements, many of which contain far more restrictive, tax-specific terms than the bilateral investment treaties themselves. These side agreements are most prevalent for investors in large, politically sensitive projects with substantial amounts of upfront capital deployments, such as in the extractive industries or utilities provision. We find that pairing ISDS with umbrella clauses similarly lowers tax revenue, especially where extractive industries are a large sector of the economy.

Our additional research suggests that ISDS provisions and the treaties that contain them are related to lower labor and human rights standards. ISDS and the treaties that contain them protect corporations from governments. But they leave domestic groups and actors vulnerable by failing to explicitly ask that labor rights and human rights be observed at the same time as the rights of multinational corporations. That asymmetric protection increases government’s incentives to undermine labor standards, either by slacking on labor law implementation, reducing labor’s right to act collectively, or both.

This downside, together with pressure on tax revenue, can give rise to pent-up grievances that can manifest themselves as protests against multinationals or governments. The fear of being sued by an investor can force the hand of the government to favor multinational corporations, even at the cost of violating the rights of its own citizenry.

In line with those expectations, our analysis of trends from 113 developing countries between 1981 and 2009 shows that investment treaties with ISDS provisions are statistically related to a worsening of human rights and labor practices, and more protest. These trends are especially large in countries where domestic groups and citizens are not protected by democratic institutions.

This implies that there are big stakes to the current ISDS controversy, which go far beyond the current administration’s concerns with U.S. sovereignty. ISDS provisions can help attract investment to countries that need foreign capital, and offer a mechanism to discipline governments and encourage respect for contracts and the rule of law.

However, the costs that ISDS provisions impose on developing countries are far from trivial. They don’t just make it harder for governments to enact bad policies, but they also limit the ability of governments to tax and protect workers and vulnerable citizens.

Cristina Bodea is an associate professor of political science at Michigan State University.

Andrew Kerner is a research associate in the political science department at Michigan State University.

Fangjin Ye is an assistant professor in the School of Public Economics and Administration at Shanghai University of Finance and Economics.