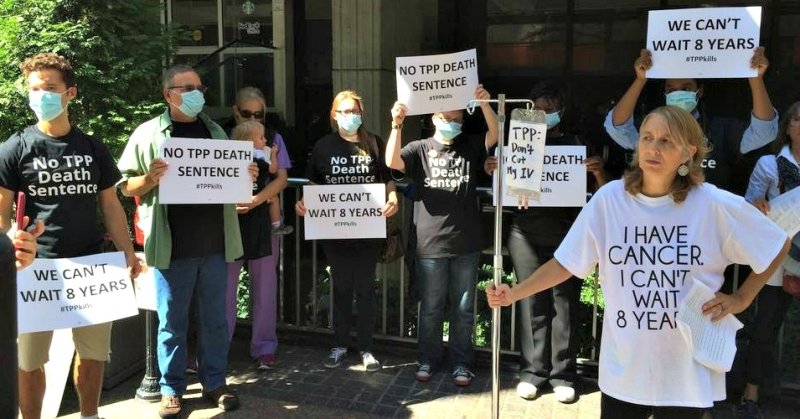 Negotiators from 11 countries have been racing to resurrect the near-dead Trans-Pacific Partnership Agreement before the Asia-Pacific Economic Cooperation (APEC) summit this weekend.

The latest plan to get the controversial trade deal up and running again after the withdrawal of the United States involves freezing some of its controversial rules. These include rules for biologic drugs, an expensive class of medicines often used to treat conditions such as cancer and rheumatoid arthritis.

Biologic drugs are produced from living organisms using certain types of cells to produce particular proteins. Biologics have the ability to bind to specific cells, which means they are often more effective and may have fewer side effects than broadly acting drugs.

They are very expensive, particularly when they are under monopoly protection. This is when the drugs can’t be legally copied for a certain amount of time. Governments have accepted the pharmaceutical industry’s proposition that they need this monopoly period to recoup their research and development costs.

For example, pembrolizumab (Keytruda), a drug for metastatic melanoma, cost patients approximately A$150,000 for a year’s treatment before it was subsidised by Australia’s Pharmaceutical Benefits Scheme (PBS).

Once the period of monopoly protection ends, biosimilar medicines (generic versions) can be produced and sold at lower prices. Currently in Australia, once a biosimilar is on the market and listed on the PBS the market prices will drop by about 16% for all brands of the medicine.

During the period of data exclusivity, other drug manufacturers wanting to replicate the medicine can’t access the clinical trial data used to demonstrate the safety and efficacy of the original drug to the regulator.

This form of monopoly protection is separate to the period of patent protection. In Australia, the data protection period is currently five years for both biologics and conventional drugs.

While the industry argues this period is necessary to support innovation, there’s little evidence to validate this claim. One international comparative study found no relationship between the existence of data exclusivity and the amount of pharmaceutical industry investment in a country.

While there’s no evidence to support this form of monopoly protection, there is significant evidence of the costs for Australian taxpayers when there are monopolies on biologics.

New research in the Australian Health Review shows biologic drugs cost Australia’s PBS over A$2 billion in the year 2015-2016 alone. If cheaper biosimilar versions of these medicines had been available in 2015/2016, at least A$367 million would have been saved.

Modelling shows annual PBS spending on biologics could be reduced by as much as 24% through the timely availability of biosimilars.

The TPP’s rules for biologic medicines could not only keep these biosimilars out of reach for longer, but also put hundreds of millions in PBS savings at risk. This is unless the negotiators agree to remove these rules completely from the revamped TPP.

Intellectual property and the TPP

TPP negotiators should also seek to drop a suite of other intellectual property measures that would extend pharmaceutical monopolies in several of the low- and middle-income countries participating in the remaining TPP-11 discussions.

High-income countries, in contrast, would experience little change regarding access to medicines as a result of the TPP. Australia, for example, has already implemented these measures (aside from those affecting biologics) and would not have to make legislative changes.

But Australia and other high-income countries would become locked into these provisions, making it difficult for future governments to amend their domestic laws. Australia’s independent Pharmaceutical Patent Review panel recommended Australia should be working to reduce the length of patent term extensions.

The TPP-11 discussions provide an opportunity for negotiators to rectify some of the most contentious and politically unacceptable elements in the TPP, and drop them from the agreement.