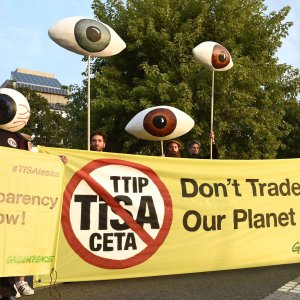 Despite the rumours and assertions by several Member States that TTIP is dead, the fight for safeguarding citizens’ rights and freedoms via so-called “trade agreements” is far from over. Now it is time to address the threat from the Trade in Services Agreement (TiSA). Just days after Wikileaks made public some key negotiating documents concerning TiSA, Greenpeace Netherlands has released another batch of crucial and worrying documents.

"TiSA is the perfect example on how the new generation of trade agreements is threatening our security and privacy online and non-discriminatory internet access. We’re outraged that trade negotiators are ignoring advice from civil society and agreeing to measures that will undermine our rights and freedoms," said Maryant Fernández, Advocacy Manager of European Digital Rights (EDRi).

EDRi has found that:

These findings are a result of the analysis of the Core Text, the Transparency Annex, the Telecommunications Annex, an internal note of the European Commission to the European Parliament, the EU proposals on dispute settlement and institutional aspects of TiSA released by Wikileaks. In addition, we reviewed the annexes on e-Commerce, Financial Services as well as the New Provisions applicable to all services, published by Greenpeace Netherlands.

EDRi will keep fighting to defend our civil liberties and rights online. In this regard, we express our gratitude and support to everyone involved in the release of these documents, without whom citizens will not be able to know the truth and influence the negotiations.