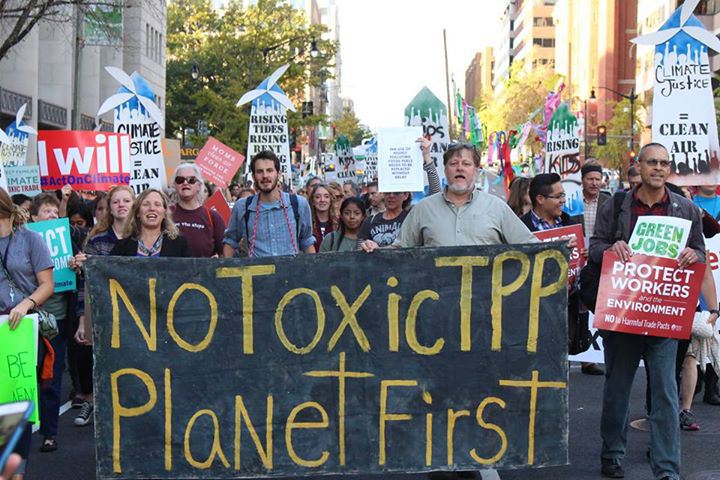 After eight years of secret negotiations, governments will sign the 12-nation* Trans-Pacific Partnership Agreement in New Zealand on February 4. The treaty text, which was only made public last November, confirms what critics of the deal have been contending since leaked portions of the draft chapters became available, and even earlier, since corporations have never been shy about setting out their goals. The TPP in its final form shows that the corporations have gotten what they want: a trade deal which threatens democracy.

The TPP confirms sweeping new powers on transnational investors, codified in their ’right’ to sue governments in closed arbitration tribunals for any laws, regulations, court decisions or actions which fail to meet their "expectations" as investors - the notorious investor-to-state dispute settlement procedure (ISDS). Under similar trade and investment treaties, ISDS has been successfully used by corporations to contest the power of government to ban or restrict the production, transport and waste management of toxic chemicals, license the management of land and water resources, promote alternative energy, set rates for water and electricity services, restructure sovereign debt, eliminate toxic pesticides, maintain food safety standards and require companies to properly label the products they market. TPP codifies the most toxic features of this mechanism and incorporates an elastic definition of ’investment’ which confers extra-legal legal power on transnational owners of stocks, bonds, speculative financial instruments like derivatives, licenses, franchises, permits and intellectual property. The treaty expands the scope for ISDS complaints to financial services, giving transnational investors the right to challenge regulatory measures which fail to meet their ’expectations’ or a ’minimum standard of treatment’. This is a battering ram to tear down even the modest measures undertaken in the wake of the 2008 financial meltdown, or improve significantly on these measures, setting the stage for new banking crises.

The treaty’s chapter on intellectual property extends the life and scope of existing copyright and patent protections and potentially allows for lawsuits to challenge government price and procurement policies on life-saving drugs. Signatory countries are obliged to sign a treaty, the 1991 International Convention for the Protection of New Varieties of Plants, which guarantees corporations the ’right’ to patent every plant species and prohibits farmers from exchanging these seeds. Other provisions open the door for corporations to challenge public oversight of biotechnology, weakening resistance to the further expansion of (patent-protected) genetically modified plants and their associated pesticides.

Regulation of domestic services covered by the agreement are protected from investor challenge only to the extent that they are regulated in a "reasonable, objective and impartial manner". While there is no chapter on government procurement in the TPP, signatories are obliged to commence negotiations within three years on "expanded coverage".

The TPP goes far beyond the current WTO treaty rules, and even many provisions in regional and bilateral trade and investment treaties which are ’WTO-plus’ in areas which transnational investors have long sought to conquer, including intellectual property, financial services, food and agriculture, biotechnology and services. It undermines the democratic right of governments to legislate and to regulate in the public interest, and thereby undermines fundamental human rights, including the rights to food, healthcare and education. If ratified, it would seriously impede efforts to create quality employment, promote sustainable food production and tackle climate change, using the lever of public investment.

The corporate power grab is embedded in language which promises to protect the right of governments to regulate in the public interest - provided that regulation is subject to market disciplines, meets investor ’expectations’ and is ’non-discriminatory’. With TPP, governments can indeed regulate, but only if they are prepared to pay millions to transnational companies and their legal squads. The chapter on labour rights obliges three countries (only!) - Brunei, Malaysia, and Vietnam - to bring core ILO Conventions into their domestic legislation, but remains essentially rhetorical and unenforceable. The environment chapter, touted by the Obama administration as the strongest ever in an international trade agreement, actually marks a retreat in comparison with other US international environmental commitments. More to the point, no treaty which grants such sweeping powers to private corporations could be ’balanced’ through labour or environmental safeguards, and the treaty process requires signatory countries to bring all domestic legislation into conformity with the investor claims in the agreement. TPP and similar agreements have to be defeated, not amended or ’improved’ if labour wants to advance its own agenda.

Unions and their allies have a window of opportunity to stop the TPP. Signing must be followed by ratification by the signatory governments, although ratification by six countries representing at least 60% of the economic output of the twelve countries can bring the treaty into force for those six. Anti-TPP campaigners have succeeded in raising global awareness of the treaty’s destructive impact, and the US elections this year add to the controversy and uncertainty around the ratification process in the US and the other big economic players. The labour movement and our allies must make full use of the opportunity this provides.