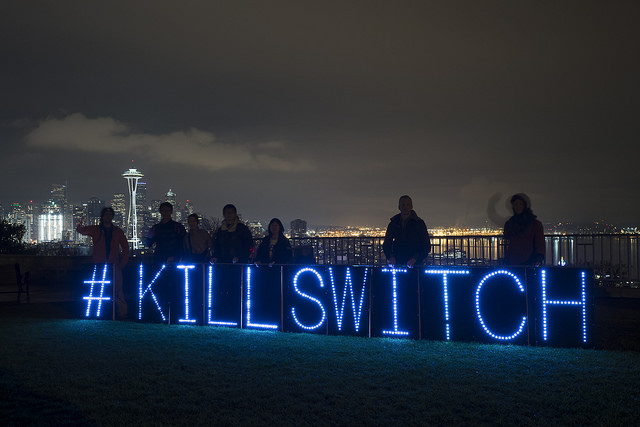 Top officials of countries involved in the Trans-Pacific Partnership (TPP) are convening in New Zealand today to sign the final agreement. But really this ceremony is just a formality. We knew since November, from the day they announced a completed deal and made the text public shortly thereafter, that they would do this. These officials have not been accountable to the public. They have remained steadfast in excluding public participation and ignoring all calls for transparency over the more than five years of TPP negotiations. Because of this opaque process, trade negotiators were able to fill the agreement with Hollywood and Big Tech’s wish lists of regulatory policies without having to worry about how they would impact the Internet or people’s rights over their digital devices.

But for the TPP to actually go into force, countries need to ratify it. Each of the twelve TPP countries have differing procedures for doing this, but in the U.S., both houses of Congress needs to vote up or down on the agreement. Due to both political reasons and the terms of stipulated by the TPP, [1] the agreement cannot go into force without the United States’ ratification. That’s why it’s so critical that people in the U.S. demand congressional accountability over this deal and urge their lawmakers to vote no when the TPP comes before them for approval.

The U.S. Congress is not likely to vote on the TPP implementing legislation (aka ratification) until after the International Trade Commission (ITC) comes out with its report about the agreement’s economic impacts in mid-May. At some point after that, the President will submit the implementing legislation to lawmakers. Once that happens, the House has 60 days from the bill’s introduction to hold a vote on it and the Senate gets another 30 days, so 90 days in total, to approve or reject it. This second timeline will only begin when the White House is confident that it has the votes lined up for its approval. That’s why it’s critical to apply constant pressure on lawmakers so that they will turn a cold shoulder to the Executive’s plan to pass the TPP.

Absolute Threats to Rights with Questionable Benefits to the Economy

While trade leaders tout the signature of the agreement today, the TPP continues to attract international criticism. From Geneva, UN human rights expert Alfred de Zayas published a statement yesterday condemning the entire deal, saying that the "TPP is fundamentally flawed and should not be signed or ratified" unless it guarantees the right of states to enact regulations in the name of protecting the public interest. He also stressed that the countries involved must reaffirm their international human rights obligations while carrying out the provisions of the agreement. Professor Michael Geist of the University of Ottawa has been writing about the agreement every weekday since the new year, highlighting various troubles with the TPP—including the lack of balance in the Intellectual Property chapter, its ban on circumventing digital locks on devices and content, and the different ways the deal could undermine users’ online privacy.

Even the economic benefits of the TPP are being hotly contested. Researchers at Tufts University released a report on Monday that found the agreement would lead to losses in employment and increased economic inequality. Meanwhile, an analysis by the Peterson Institute for International Economics published last week supported the White House’s claims that it would increase incomes and economic growth in the United States. These reports could influence the outcome of the ITC’s examination of the TPP, and in turn, impact congressional support or disapproval for the deal.

There’s disagreement about the impacts of the substantive contents of the deal, but there is one thing for certain. The TPP negotiations were held behind closed doors with heavy influence from a limited subset of stakeholders. This meant members of the broader public, including small businesses, entrepreneurs, and other underrepresented industries, were largely excluded. So given this fact, it is pretty unconvincing that the TPP could truly reflect the concerns of all the diverse stakeholders in the economy, many of whom may not be politically influential now, but may be on the frontiers of driving innovation forward in the decades to come.

What’s important to remember too is that economic growth is not the only factor by which we should measure the value or necessity of proposed laws and regulations. The TPP may lead to the growth of national economies by some percentage points, but is that all that matters? Of course not. Things like the right to repair, modify, and recycle our own devices matter. The ability to talk about, criticize, take apart, and reuse creative works that is new or otherwise relevant, matters. It matters whether or not culture remains locked up by the law for so long that decades of it become underutilized, or worse, literally disappear without ever getting preserved.

All of these and other considerations matter. Yet the impact the TPP will have on them was never taken into account, nor will they ever be measured or discussed. This is why this agreement is such a betrayal of democracy, of everyone whose concerns were not privileged in these negotiations. We have to make sure Congress understands this—and they only will if they hear it from the American people, their constituents.

[1] The TPP will enter into force either 60 days after all original signatories ratify it or, if that doesn’t happen within two years, in April 2018 if at least six of the 12 countries accounting for 85 percent of the combined gross domestic product of the original signatories have ratified the agreement.