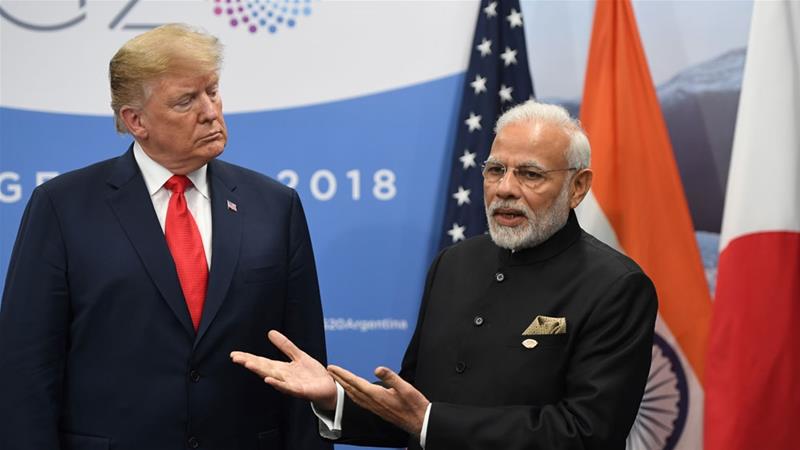 WASHINGTON — The Trump administration is racing to announce limited trade deals with Japan and India before the end of the month, as President Trump tries to score some wins amid a protracted trade fight with China.

The “minideals” are aimed at helping Mr. Trump overcome concerns about his trade approach before the 2020 election and prove to voters that he is delivering on a key promise to negotiate bilateral trade deals in America’s favor. Mr. Trump also wants to calm the concerns of struggling farmers, who have been largely cut off from foreign markets like China in retaliation for the president’s trade war.

Any agreements could be announced in the coming days. Mr. Trump will join Prime Minister Narendra Modi of India at a rally on Sunday in Houston and will appear alongside Mr. Modi and Prime Minister Shinzo Abe of Japan next week at the United Nations General Assembly meeting in New York.

Unlike traditional trade pacts, the agreements Mr. Trump’s advisers are drafting are likely to be confined to a few sectors or products. In keeping with Mr. Trump’s more transactional approach to trade, his negotiators have focused on a few key interests — like those of farmers — while setting the bulk of contentious issues aside. Sign Up for On Politics With Lisa Lerer

A spotlight on the people reshaping our politics. A conversation with voters across the country. And a guiding hand through the endless news cycle, telling you what you really need to know.

With Japan, the Trump administration has been pressing for American agricultural products to gain some of the same access to its markets that would have happened under the terms of the Trans-Pacific Partnership. Mr. Trump withdrew the United States from that agreement within days of taking office.

The administration is also pressing India to provide more access for farmers to sell products like pork, and to reduce tariffs on electronics.

The push to secure limited deals comes as the administration struggles to notch any big wins on trade. So far, the White House has made modest changes to a trade agreement with South Korea, allowing the United States to export more automobiles to that country. And while the administration negotiated a substantial update to the North American Free Trade Agreement, the deal has yet to be approved by Congress.

Mr. Trump’s signature trade fight with China is also proceeding in fits and starts, and substantial differences remain before a deal can be reached. Mr. Trump has placed tariffs on $360 billion worth of Chinese goods and plans to impose levies on nearly all Chinese imports by the end of the year. The tariffs have pushed China to the negotiating table, but the two governments have clashed over the changes that the administration is seeking to China’s economic practices, and over how many American farm products the Chinese might buy and whether Mr. Trump will scale back his tariffs.

Tensions between China and the United States have eased somewhat in recent weeks, and dozens of Chinese government officials are expected to arrive in Washington this week for negotiations on Thursday and Friday, to pave the way for a meeting of higher-level officials in early October. Editors’ Picks He Wanted a Little Charm Downtown — on a Budget. Which Place Did He Choose? Giuliani Divorce: It’s Ugly, It’s Operatic. What Did You Expect? Demi Moore Lets Her Guard Down

But Mr. Trump has delighted in being unpredictable in trade negotiations, and it is unclear when or if a deal will be reached.

As Mr. Trump has waged trade fights with China and other countries, governments like Japan, Canada, the European Union and Australia have moved ahead with free trade deals that exclude the United States, putting American companies at a competitive disadvantage.

That includes the Trans-Pacific Partnership, which lowered Japanese tariffs on a wide range of agricultural goods, including beef and dairy. Since Mr. Trump withdrew from the deal, Japan has ratified the agreement with the remaining 10 other members, giving products from Australia, New Zealand, Canada and Mexico better access to Japan than American producers have.

Details of Mr. Trump’s agreement with Japan have not been announced. But people familiar with the negotiations say the United States has secured more access for products like beef, pork, wheat and wine. In return, the United States will drop its tariffs for Japanese industrial goods, like machinery. Japan is seeking written assurances that Mr. Trump will not put tariffs on Japanese cars, but it is unclear whether the administration will agree.

Larry Kudlow, one of Mr. Trump’s chief economic advisers, told Japanese and American business leaders at the U.S. Chamber of Commerce on Tuesday that the United States was “on the verge of major breakthroughs” with Japan, as well as passing its North American trade deal and potentially in negotiations with Europe. He said the Japanese deal would also make advances in digital trade and e-commerce.

“We may be closing in on a terrific deal,” Mr. Kudlow said.

The administration is eager to claim that it has secured the gains of the Trans-Pacific Partnership without having to join an agreement that Mr. Trump called “a rape of our country.”

“If they obtain increased market access for our agricultural and industrial goods — without having to make the type of deal the president rejected when he pulled out of the Trans-Pacific Partnership — that would be a major win for the administration,” said Stephen P. Vaughn, a partner at King & Spalding and the former general counsel for Office of the United States Trade Representative.

Yet the new deal will not touch on many other areas of trade addressed in the Trans-Pacific Partnership, including environmental provisions, customs standards and intellectual property protection, said Wendy Cutler, a vice president at the Asia Society Policy Institute who led negotiations over that pact during the Obama administration. Instead, issues such as pharmaceuticals, energy and services will be addressed in future talks.

A potential trade agreement with India appears even more limited. Months after trade talks broke down between India and the United States, the two countries are racing to strike at least a modest agreement before Mr. Modi arrives for the United Nations meetings.

People briefed on trade talks between the United States and India said negotiations were fluid. But India had previously appeared willing to remove some restrictions on American farm products and limit its 20 percent tariff on imported electronic goods to a maximum of 5,000 rupees, or about $70. That would help American companies like Apple, whose iPhone XR now sells for about $600 in the United States, but more than $800 in India.

In return, India is seeking to restore a special trade status for developing countries that Mr. Trump revoked at the end of May. That program had allowed billions of dollars of Indian products, including apparel and auto parts, to come into the United States duty free.

Given India’s high barriers to foreign products, even such a limited deal could be significant.

“This would be a historically large trade agreement for the U.S. and India even though it’s quite small,” said Roger P. Murry, deputy director of the Alliance for Fair Trade With India, an industry group.

Still, Ms. Cutler said some companies were concerned about the precedent of doing minideals with major trading partners.

“It’s compounded by a concern that maybe the U.S. lost some leverage by not including these issues in the early stage,” Ms. Cutler said.