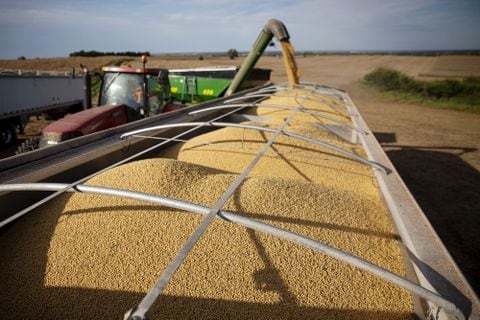 By Lora Verheecke and Mute Schimpf

European trade diplomats are looking across the Atlantic again.

Fearful of the next Trump tweet, which will either raise EU car tariffs (failure) or lower EU steel and aluminium tariffs (victory), they are navigating tense waters.

While EU negotiators provide their American counterparts with a range of trade gifts, their communication colleagues provide the public with empty promises that there is nothing to worry about.

But quietly, the environment and the public interest are being hit hard.

The EU Commission is proving generous in terms of transatlantic trade gifts.

Since then, there has never been so much genetically-modified US soy on the European market. The EU now imports 112 percent more US soy than a year ago, flooding the market to feed EU factory farms. Bad news for animal welfare, bad news for the environment.

And this new wave of US soy isn’t just propping up industrial agriculture – it’s also killing the climate.

Biodiesel produced from US soy should be deemed too unsustainable to be sold at the pump in the EU: the commission’s own figures say it is twice as bad for the climate as fossil diesel.

But as of last week, Europeans will now be able to fill their tanks with biodiesel from US soy, after the commission adapted its sustainability criteria.

A victory for Trump, a dangerous failure for the climate.

Another gift to avoid any trade storm on the horizon is the re-start of toxic transatlantic negotiations on regulatory cooperation and mutual recognition related to standards for the chemical industry.

As EU chemical standards are much stronger than the ones in the US, any negotiations aimed at harmonising standards or procedures with the aim of reducing costs for chemical companies, can only result in lowering European standards.

The commission appears willing to sacrifice the health of its citizens and the environment to please Trump (and the chemical industry).

In Brussels, Christmas seems to last until the end of January.

The EU’s most recent generous offer at the negotiating table? We will import more liquefied natural gas – in other words, fracked shale-gas.

Fracked gas is highly controversial as it has strong negative environmental and health impacts and it contributes to climate change.

Making Europe even more dependent on fossil fuel imports is not the answer to the climate crisis and clearly not in line with the Paris Agreement.

Citizens from across the continent have campaigned for years against it, and with the exemption of the UK government Europe has decided to reject shale gas.

Yet with the new transatlantic trade deal, the EU is providing financial and political support for an increase in imports of fracked gas from the US. Again, the environment, the climate and citizens’ interests are neglected.

Since last year, the message of the commission is that its trade policies are all about promoting sustainable development, stopping climate change and defending the public interest.

The reality is far from that. So desperate are they to prevent a trade war with the US that they are prepared to negotiate away our planet’s future and the health and wellbeing of EU citizens.