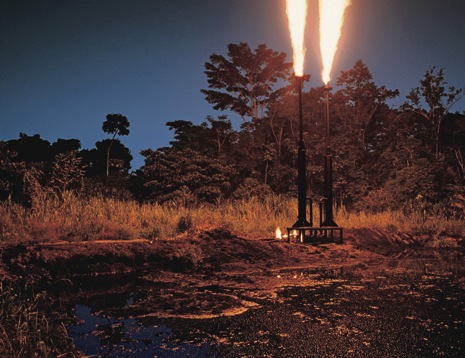 Chevron lobbied the EU to give foreign investors the legal right to challenge government decisions in a major US-EU trade deal because it would act as a deterrent against laws such as fracking bans, the Guardian can reveal.

Environmentalists have long-warned that the Transatlantic Trade and Investment Partnership’s (TTIP) investor state dispute settlement (ISDS) commercial courts risk a regulatory chill, with governments backing away from measures limiting fossil fuel extraction for fear of lawsuits. But this is the first time that a major oil firm has corroborated their fears.

Details of the US oil company’s lobby drive in Brussels two years ago emerged as EU and US negotiators sat down in New York this week to begin a 13th round of talks aimed at securing the TTIP deal. France and Germany have both previously said they want the access to ISDS removed from TTIP.

“ISDS has only been used once by Chevron, in its litigation against Ecuador,” say the minutes of a meeting in April 2014 between unnamed Chevron executives and European commission officials, which the Guardian obtained under access to documents laws. “Yet, Chevron argues that the mere existence of ISDS is important as it acts as a deterrent.”

Chevron has explored for shale gas in Romania and Poland in recent years, though it has since withdrawn the shale projects in both countries. The company is currently pursuing a $9.5bn suit against Ecuador’s government at an ISDS court in the Hague, for allowing indigenous people to sue the firm - for the same amount of money - over allegedly illegal practices dating back more than 20 years.

“Chevron’s case is often used as an example not to have ISDS,” say the minutes, which include commentary by EU officials. “This is a misperception since the case clearly proves the exact opposite. The company is raising awareness on this issue in Brussels and has handed over a more detailed analysis of the case.”

The US multinational, which takes in $19bn a year, says that a deal was reached with the Ecuadorean government in 1998 relieving it of any environmental liabilities.

But indigenous communities in Ecuador protest that they are still living with the consequences of an environmental disaster caused by the dumping of billions of gallons of toxic sludge into Amazonian streams, lakes and hundreds of unlined pits.

“This document [the minutes] shows that the power to use investment arbitration as a shackle on environmental regulations is a key reason why multinationals like Chevron defend them,” said Cecilia Olivet, a researcher at the Transnational Institute and member of the presidential commission auditing Ecuador’s bilateral investment treaties.

“Pressure on public budgets means the mere threat of a multi-million dollar international arbitration lawsuit can make governments reluctant to implement social or environmental protection measures that could affect the interests of foreign investors.”

A Chevron spokeswoman said: “It should come as no surprise that opponents and proponents are sharing their perspectives on ISDS directly with the European Commission.

“The ISDS mechanism provides a well-tested, necessary and non-politicised forum for arbitration. ISDS arbitration is used in the rare instances, as a last resort when governments and investors are unable to resolve their differences. ISDS serves a useful function of encouraging investors and host states to negotiate in good faith in order to avoid escalation of disagreements that occasionally arise.”

In a submission to the US trade representative in 2013, the firm argued that the existence of ISDS panels “increases the likelihood” of disputes being settled outside them.

Under fair and equal treatment provisions, these panels can rule against social and environmental laws enacted by national parliaments, where these conflict with a company’s profit expectations at the time that an investment was made.

In one high profile case, the US company Lone Pine is suing the Canadian state of Quebec for $250m over a fracking ban, under Nafta treaty provisions. But campaigners say that the regulatory chill effect can be more subtle.

New Zealand postponed plans to introduce stricter rules on cigarette labelling in 2013 after lawsuits by Philip Morris International against Uruguay and Australia in ISDS tribunals.

The city of Hamburg agreed to relax clean water rules in 2011 after an arbitration investment suit by Vattenfall, while Canada reversed a ban on the toxic chemical MMT and agreed a $13m payment in 1998, as a result of an ISDS claim by Ethyl.

Indonesia also granted the mining company Newmont an exemption to laws requiring local processing of raw materials before export in 2014, to settle an ISDS arbitration suit.

Peter Kirby, a partner in the Canadian law firm Fasken Martineau described ISDS tribunals as: “a lobbying tool in the sense that you can go in and say, ‘OK, if you do this, we will be suing you for compensation.’ It does change behaviour in certain cases.”

The issue has provoked fierce opposition, with an estimated 35,000 people protesting the new trade rules in Hannover over the weekend, during a visit by President Obama.

Redacted minutes of separate meetings between the commission and executives from BP, Shell and ExxonMobil in December 2013 show that the fossil fuels industry as a whole strongly backed an EU-US free trade deal.

BP was the “most outspoken” supporter, describing TTIP as “the opportunity to discuss energy and competitiveness in an international context” and welcoming the new global energy trade rules that could result.

The minutes say that “it appeared, however, that especially the transparency rules and to a lesser extent the offshore safety rules are rather of concern for the companies.”

BP and ExxonMobil said that they would also like to see TTIP deal with renewable energy subsidies, planned EU regulations on tar sands and the 1920 Jones Act, a US law which allows sailors injured at sea to claim compensation, among other things.

The firms mentioned that they would relay the information they had been given by EU officials to their colleagues in Washington DC and might come back with “further requests”.

In the documents, the commission appears keen to win the oil firms’ lobbying clout to an EU initiative to lift a US embargo on crude and gas exports.

The commission also planned to “reach out further” to ConocoPhillips, and to Chevron.

The Health and Environmental Alliance and Centre for International Environment Law this week launched a new campaign calling for EU legislation on toxic chemicals to kept out of any TTIP trade deal.