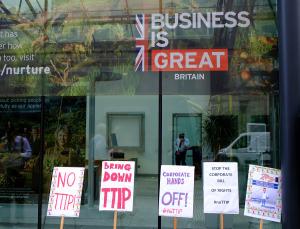 The European Union and the United States are currently negotiating the Trans-Atlantic Trade and Investment Partnership (TTIP), a major trade agreement intended to further integrate their economies.

As is common for trade agreements, TTIP negotiations have been accompanied by a series of econometric studies providing medium-term projections of the agreement’s economic effects. In the EU, advocates have pointed to four main studies mostly projecting small net benefits for all countries involved and a gradual substitution of intra-EU trade with Trans-Atlantic trade.

Recent literature has shown that the main studies of TTIP are not a good basis for policy decision as they rely heavily on unsuitable economic models.

We offer an assessment of TTIP based on a different model and more plausible assumptions on economic adjustment and policy trends. Using the United Nations Global Policy Model we simulate the impact of TTIP on the global economy in a context of protracted austerity and low growth especially in the EU and US.

Our results differ dramatically from existing assessments. For Europe we find that:

TTIP would lead to losses in terms of net exports after a decade, compared to the baseline “no-TTIP” scenario. Northern European Economies would suffer the largest losses (2.07% of GDP) followed by France (1.9%), Germany (1.14%) and United Kingdom (0.95%).

TTIP would lead to net losses in terms of GDP. Consistent with figures for net exports, Northern European Economies would suffer the largest GDP reduction (-0.50%) followed by France (-0.48%) and Germany (-0.29%).

TTIP would lead to a reduction of the labor share (the share of total income accruing to workers), reinforcing a trend that has contributed to the current stagnation. The flipside of its projected decrease is an increase in the share of profits and rents, indicating that proportionally there would be a transfer of income from labor to capital. The largest transfers will take place in UK (7% of GDP transferred from labor to profit income), France (8%), Germany and Northern Europe (4%).

TTIP would lead to a loss of government revenue. The surplus of indirect taxes (such as sales taxes or value-added taxes) over subsidies will decrease in all EU countries, with France suffering the largest loss (0.64% of GDP). Government deficits would also increase as a percentage of GDP in every EU country, pushing public finances closer or beyond the Maastricht limits.

TTIP would lead to higher financial instability and accumulation of imbalances. With export revenues, wage shares and government revenues decreasing, demand would have to be sustained by profits and investment. But with flagging consumption growth, profits cannot be expected to come from growing sales. A more realistic assumption is that profits and investment (mostly in financial assets) will be sustained by growing asset prices. The potential for macroeconomic instability of this growth strategy is well known after the recent financial crisis.

Our projections point to bleak prospects for EU policymakers. Faced with higher vulnerability to any crises coming from the US and unable to coordinate a fiscal expansion, they would be left with few options to stimulate the economy: favoring an increase of private lending, with the risk of fueling financial imbalances, seeking competitive devaluations or a combination of the two.

We draw two general conclusions. First, as suggested in recent literature, existing assessments of TTIP do not offer a suitable basis for important trade reforms. Indeed, when a more realistic model is used, results change dramatically. Second, seeking a higher trade volume is not a sustainable growth strategy for the EU. In the current context of austerity, high unemployment and low growth, increasing the pressure on labor incomes would further harm economic activity. Our results suggest that any viable strategy to rekindle economic growth in Europe would have to build on a strong policy effort in support of labor incomes.