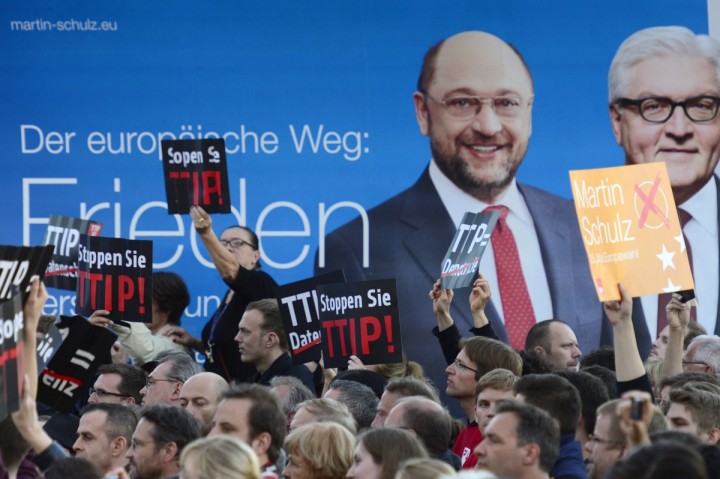 TTIP: Labour will not back EU-US trade deal without NHS safeguards

The UK’s shadow trade and investment minister Ian Murray has said that Labour will withdraw its support for the controversial Transatlantic Trade and Investment Partnership (TTIP) if safeguards are not inserted to protect public services including the NHS from US investors.

In an interview with IBTimes UK, Murray also said there is "no case" for including investor-state dispute settlement (ISDS) instruments in the free trade agreement between the EU and US.

If included in TTIP, ISDS would allow multinationals to take legal proceedings against EU governments for loss of profits due to public policy decisions.

Asked whether Labour support was dependent on both these items being excluded, Murray replied: "That’s certainly the position of the Social Democrat members of the European Parliament, and Labour is part of that. They’re very much of the view that the general utilities reservation [which would exempt public services] and ISDS are the red lines for them – and for us as well."

Speaking specifically about the health service, he said: "There’s no doubt the NHS could be specifically exempt from any deal. There are good grounds for that."

Murray also called on negotiations to be conducted in a more transparent manner, saying that fears among the general public over the implications of the mooted treaty are being sparked in part by a lack of information.

"Because this isn’t being done as democratically as it should be, then reports will suggest it’s either completely beneficial or detrimental. It’s difficult to know where the benefit lies until it becomes more transparent," he said.

However, he reiterated the Labour Party’s support for the agreement and while admitting that the benefits may have been "overstated", he said that TTIP would "undoubtedly affect the balance of payments in the UK and benefit people".

TTIP negotiations began 12 months ago at the G8 Summit in Enniskillen but have become fragmented in recent months, with ISDS causing a significant stumbling block to progress.

The controversial clause would allow investors to sue sovereign governments if they thought local laws were impacting negatively on their investments.

In a rare instance of the clause being activated last year, mining company Lone Pine Resources brought a $250mn lawsuit on the Quebecois government because its moratorium on fracking hit the investment it had made in local shale deposits.

The EU Trade Commissioner Karel de Gucht has since called on ISDS to be dropped from TTIP discussions, but anti-free trade campaigners have been trying to draw attention to its potential inclusion.

Murray drew a parallel with the recent free trade agreements the EU negotiated with Canada and South Korea, which allowed for both the protection of public services and which included a toned-down form of ISDS.

The EU website says the version of ISDS included in the Canadian agreement "has a number of key features designed to ensure that the system is effective and efficient, whilst providing important procedural safeguards which will improve the control of the parties of the interpretation of the agreement and ensure that frivolous cases are discouraged or swiftly dismissed".

Addressing fears around the US use of genetically-modified organisms (GMO) which are banned in EU food production, Murray said: "They’re banned in Europe already, so they’ll [the US] find that difficult to negotiate away.

He called on negotiators to ensure that the agreement is "beneficial for consumers and jobs", and said he would support independent, government-funded research into the actual benefits of TTIP.

Murray criticised the coalition government’s trade strategy as being "far too complex", saying that small businesses don’t know how they can access the financial and consultancy support available to them through UK Export Finance (UKEF) and UK Trade and Investment (UKTI).

A Labour government’s export strategy, he said, would centre on making things easier for small businesses and expanding the scope, so that support can be offered in more international markets.

There’s no way we’ll hit the export target of £1tn by 2020, no way will we get 100,000 new companies exporting [the two pillars of George Osborne’s export strategy]. The Office of Budgetary Responsibility report from March/April shows that exports are going to be a drag on growth rather than contributing."

He claimed that the economy is not being rebalanced and that the growth is being provided "by an artificial housing bubble", which is in turn being "done on debt and consumer spending, which we were told were the three things that got us in trouble" in the 2008.

In the week that China’s president Li Keqiang flew into the UK to ink a series of trade deals worth billions of pounds to the economy, Murray expressed some level of sympathy with the position of the government around China’s human rights record.

"Until you see some tangible efforts that show that it’s [China’s human rights record] improving, you need to be quite cautious. Investing and exporting comes with responsibility. It seems slightly contradictory to write the cheque with one hand and not do anything about it with the other", he said.

When asked whether Labour would also have entered into the agreements with China, he said: "That’s very difficult, because with that money you build infrastructure, which creates jobs. Trade can be used as a mechanism for improvement. It’s chicken and egg, you need to be able to have trade and investment in order to raise the issues and to ensure things get better."