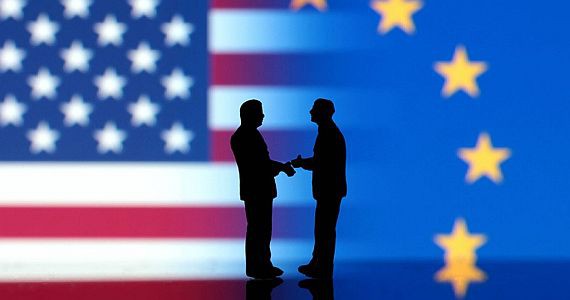 TTIP: The newborn in the neoliberal saga

This is a free translation by Anoosha Boralessa (May 2015). Not revised by bilaterals.org or any other organization or person

Since the mid 1990s, some relevant economic actors have been trying to contribute to the evolution of a massive free trade zone linking the US and Europe, two of the richest regions in the world. The transatlantic trade and economic partnership (the TTIP according to its English acronym) began to take shape in recent years: first, in the negotiating forums between big corporations on both sides of the North Atlantic and then states took charge, following the business lobbying.

On 28 November 2011, an EU / US Summit was held in Washington amid a complex climate in the old continent: the crisis intensified harshly in the Euro Zone. In this same period, the United States was trying to pull up its head following its financial disaster in the period 2003 to 2009. Such circumstances required taking specific measures to resolve such serious problems. Thus a High Level Group on Jobs and Growth was established with the mandate of “identifying policies and measures to increase EU/US trade and investment, to support job creation, economic growth and international competition. [1] Finally in February 2013, after working for more than a year, the Group issued a report recommending that a bilateral treaty be implemented.

This was the starting point for the negotiation process, which the European Council (EC) approved in June 2013. As a follow up step, rounds took place — in total secrecy — for signing the agreement. The European Commission decided to impose stricter restrictions on access to the most important documents. This was the pre-condition for deregulation that the United States requested of the EU members. This restriction, in accordance with the protocols, results in denying access to these documents even to government civil servants of the Member States, except in reading rooms designated for such a purpose. And these documents may not be taken out or copied. [2]

This secrecy was essentially tied up to the TTIP’s aim, which is not so much to eliminate trade barriers (these have almost all been eliminated) but rather to remove regulatory “barriers” that are nothing other than the laws of many states relating to labor rights, environmental regulation etc. For this reason, what is agreed is extremely prone to public censure and may lead to generating a highly unfavorable climate for continuing these negotiations.

We have to mention some of the topics that generated the harshest criticisms: eliminating restrictions on genetically modified organisms (GMOs) and other European regulations relating to food safety; serious doubts on generating employment and the possibility of increasing job insecurity; watering down regulations linked to environmental issues, notably fracking; the danger for loss of privacy in maintaining personal data; and a restriction on the access to information, a consequence of stronger intellectual property rights.

Furthermore, it seeks to liberalize “market forces” (a euphemism coined by big corporations) for essential services such as health and education, by promoting the privatization processes. It seeks to achieve the complete dismantling of what remains of the Welfare State in Europe by opening up niches for the placement of capital surplus that cannot achieve profit in other places. This places the State entirely subject to the plan of the big business class: that 1%, as they called it, after Occupy Wall Street.

While many citizens and organizations on both sides of the North Atlantic lack confidence in and cannot gain access to information on the substance of this agreement, big companies are always kept abreast of it. Furthermore, there is the idea that the deregulation process driving the TTIP will not be 100% complete once the negotiations are concluded. Rather, it is thought that transnational giants must be given the opportunity to be able to amend the regulations so as to conform to their wishes. The plight of big business must be made an absolute priority. For this, the establishment of an investor state dispute settlement mechanism (the English acronym for which is ISDS) is presented. This grants “transnational corporations the power to make a direct claim against specific countries for losses in their areas of jurisdiction resulting from public policy decisions” [3]. Something similar to what, in the field of the World Bank (WB), ICSID represents. This means placing capitalist businesses on an equal or even superior footing, with sovereign states. As a result, sovereign states lack the ability to freely determine their laws, faced with the consequence of being fined by this tribunal. To this, we must add that corporations alone can access it to make claims; all states can do is defend themselves.

ICSID’s narrative — where the overwhelming majority of cases are resolved in favor of capitalists — does not serve as a good example for the democratic aspirations of European and North American citizens.

Most analysts that are critical of the TTIP, agree that what is at stake is democracy and sovereignty in these countries that are confronted by development of the claims of big transnationals. If the TTIP is approved, citizens will have a rather narrow range of the workforce to halt corporate aspirations. Any government that they elect will have to act within the strict limits they impose, or, if they fail to do so, will assume a completely radical position that implies not only rejecting the TTIP but also the dream of a united Europe.