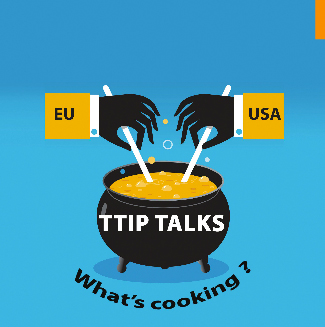 As negotiations for the Transatlantic Trade and Investment Partnership (TTIP) continue, so does resistance from people on both sides of the Atlantic. Together with labour standards, privatisation of public services and the lack of transparency in negotiations, food safety is a key concern for Europeans. The thought of beef pumped up with growth hormones and chlorine-washed chicken, not to mention genetically modified organisms (GMOs), has enraged the public.

There are no tariffs and other traditional barriers to trade between the free market pioneers EU and US. Instead, TTIP seeks to lift the “barriers” that take place within countries. It aims to harmonise regulation – a euphemism for a deregulative race to the bottom. It would be naive to claim deregulation only threatens the EU with American standards; in some cases, such as in the financial sector, the US indeed has stricter regulation. But with the case of food, there are legitimate concerns that US companies are lobbying hard to erode European safety standards.

There are currently 82 pesticides used in the US that are banned in the EU. This is largely because the EU acts according to the so-called precautionary principle; chemicals are prohibited until they are proven safe. On the other side of the Atlantic, it goes the other way round. Chemicals, including pesticides but also those in cosmetics, have to be proven unsafe to be banned.

A Friends of the Earth report examines the draft chapter on food safety and animal welfare published by the EU negotiators in January this year. Concerns include “the priority given to maximising trade, the shift of power from national governments to a new trade committee, the threat to the ability of local authorities to set higher standards, the risk of minimal health and safety checks for novel foods (including GMOs, cloned animals and nano materials), non-binding provisions for animal welfare and the required adoption of international food standards established through the World Trade Organisation (WTO).”

The report highlights how new products not covered by existing rules could escape regulation completely; new regulations could be seen as a barrier to trade. If this was not a problem under the TTIP agreement itself, the proposed Investor-State Dispute Settlement mechanism could open the door for legal action if a company saw regulation as a threat to their profits.

The problems with TTIP run deeper than concerns with food quality. The trade agreement is a gross violation of sovereignty - both at the national level and when it comes to the ability for people to organise according to democratic principles. This includes their own food systems.

The draft from EU negotiators proposes that the responsibility for food health and safety lies with a new EU-US management committee. It would consist of trade and regulatory experts, potentially industry representatives; hence the power to decide about food safety regulations would shift away from national authorities. As the Friends of the Earth report says: “Trade experts tend to see safety rules as technical trade barriers rather than as reflecting the needs and demands of society.” Rules on food safety, plant and animal welfare could only be contested by investors and governments, not members of public.

TTIP is the latest stage in the process often called globalisation, where transnational capital triumphs labour rights and environmental standards in the name of free trade. Capitalist globalisation is intrinsically linked to the market-oriented development model that has dominated since the 1980s. But in a similar vein as there seems to be no return to the statist development model – which the East Asian development miracle is often attributed to, but which also brought about heavy state repression – the state cannot rectify the growing injustices of markets. National interests are too entwined with those of capital. As John Hilary writes in his book, The Poverty of Capitalism: “The significance of globalisation’s challenge was not that states lost the political space to determine their own policies, but that labour and local communities were disempowered by the state and capital combined; in Etienne Balibar’s formulation, ‘the heart of the crisis of sovereignty is the disappearance of the people’.”

This is why structures at the national level cannot be brought in to fix the problems of capitalist globalisation, as the absence of measures to regulate finance after the 2008 crisis has shown. The new rise of nationalism across Europe further highlights the need to look beyond the nation state. Social sovereignty is needed instead, one that brings the people’s needs to the fore – as echoed in the calls of the post-2008 social movements’ demands for real democracy.

TTIP is, of course, only the tip of the iceberg. Our food system is already flawed.

It is dominated by supply chains that stretch from big monoculture farms to the supermarket. The cheap prices we pay for our foreign fruit and vegetables rest on the exploitation of temporary and underpaid, mostly female, workers picking them in the global South, and of temporary and underpaid, mostly female, workers behind the till of the local Tesco. Environmental costs are, of course, not factored in – neither is suffering in the face of low animal welfare standards.

The global food industry is highly concentrated. No more than four companies control the global market in seeds, agrochemicals, biotechnology, trade and retail. As any oligopoly, this ensures their super-profits. It also acts as a barrier for regulation, when corporations are big and powerful enough to lobby their will through into legislation.

The US Department for Agriculture and the US Food and Drug Administration have an active revolving door with the infamous Monsanto. The biotech giant alone controls more than a quarter of the world’s commercial seed market and has been widely criticised for its efforts to patent seeds, building blocks of life that by nature should reproduce.

But criticism from the public has not hindered the food safety authorities’ cosy relationship with the company. USDA has accepted every single application from Monsanto for new genetically engineered crops. It gets worse; a former Monsanto lobbyist turned USDA administrator approved the company’s growth hormones for cows. The Monsanto employee who oversaw a report into the substances’ safety went on to work for USFDA and approve her own report.

Monsanto, yet famous, is just one example. But it shows why the right thing to do is not to extend these corporations’ power, as TTIP would do. The dire state of our food system also shows why it is not enough to resist TTIP by clinging onto what we already have. The best resistance is often developing practical alternatives. That is also the case with food.

There are alternatives: food sovereignty

One of the furthest developed global frameworks for grassroots sovereignty is that of food sovereignty. It is “the right of peoples to healthy and culturally appropriate food produced through ecologically sound and sustainable methods, and their right to define their own food and agriculture systems,” according to the international peasants’ movement, La Via Campesina.

The principles of food sovereignty are simple. Food is a human right. The land belongs to those who work it, and those who work the land must have the right to manage resources sustainably. Food is only secondarily an item of trade; regulation of speculative capital and a strictly enforced code of Ccnduct for multinational corporations is needed. The ongoing displacement, forced urbanisation and oppression of smallholder farmers cannot be tolerated. Smallholder farmers must have direct input into formulating agricultural policies.

It is obvious that these principles are in direct contradiction with the interests of big capital. Multinational corporations do not want a code of conduct or stricter regulation. Land-grabbing and forced evictions are part of the toolkit of big agribusiness in the global South, as they were a few hundred years ago when industrial agriculture was first introduced in England.

Sustainable farming practices such as agroecology also threaten big agribusiness’s interests; they give higher yields than large-scale industrial agriculture. This shows that pesticides and chemical fertilisers are not needed, undermining the case for extending their markets.

And, indeed, seeing food first and foremost as a source of nutrition everyone has right to is the polar opposite of the drafted TTIP policy of trade maximisation.

Food sovereignty is not just a set of good intentions. Mali, Senegal, Nepal, Bolivia and Venezuela have made achieving it a government policy, showing that Europe too could choose a different path. And movements all over the world, from the millions-strong Landless Peasants’ Movement MST in Brazil to community gardeners in British cities, are organising along its principles. Every act of reclaiming land, practising permaculture or swapping seeds can be seen as an act of resistance to our industrialised food regime that wants to profit out of our essential needs.

So – if marching against yet another free trade agreement is not your cup of tea, dig in and grow some organic vegetables instead. There are plenty of crops you can sow in the autumn.