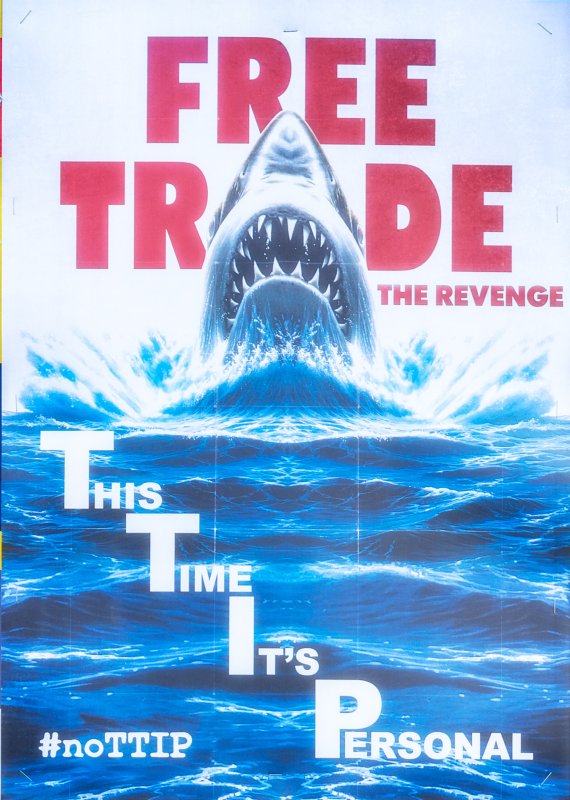 TTIP [1]: Why we are asking for an immediate suspension? With a sense of urgency !

Human rights organizations have joined the broad Belgian coalition of the trade union confederations, mutuality’s, consumer organizations and environmental and development umbrella NGOs and are asking for an immediate suspension of the TTIP negotiations. United, the organizations call for the suspension for multiple reasons, but above all for the defense of fundamental freedoms and rights. An eventual restart must be conditioned on the adoption of a fundamentally different mandate.

The impacts of TTIP are potentially devastating.

For workers, who risk becoming the big losers. Contrary to the impact analysis advanced by the European Commission in 2013 that suggests that 4.000 jobs could be created in Belgium alone, TTIP could in fact cost more than 60.000 jobs in Belgium [2]. For the health-care sector, which Belgium only spends 11,2 % of its GDP on yet still guarantees a large coverage for all of its citizens. This will be put in competition with the US system where health costs represent 17,1% of the GDP, yet with big inefficacy and well-known social injustices. [3]

For the consumers also. The product norms are in many cases less restrictive in the US and are much more in favor of the multinationals, as the example of the cosmetic products shows: 1300 products are prohibited for public health reasons in Europe, 11 only are prohibited on the other side of the Atlantic.

The impact of TTIP on environment and development is equally contested, notably in the context of an even greater protection foreseen for private investors through the so-called ISDS. Through ISDS, foreign private investors will be able to sue countries for any new laws that the investor thinks are damaging for the company’s expected return on investment. These could be social or environmental laws improving standards and rights. The dispute system in ISDS is private, beyond the reach of our national court system. Investors could win leaving our country with a multi-million dollar debt to pay. This is totally unacceptable situation, and the reason why multiple organizations call for an exclusion of such a mechanism. The campaign www.no2isds.eu is calling the Members of European parliament explicitly not to support such a mechanism during the forthcoming vote.

TTIP is also a question of human rights and data protection. In a “knowledge society” or a “digital economy”, trade with data constitutes a commercial issue of first importance for multinationals such as Google, YouTube or Amazon. Multinationals such as Axciom already own data registers from 700 million citizens in both the US and Europe, with up to 3000 data for these citizens [4]. Half of all citizens in European countries, for example Germany, are in such registers without knowing it most of the time. In the context of TTIP and TiSA, which is another extremely contested agreement that is negotiated in total secrecy, and which focusses on the liberalization of services, American companies are lobbying for the suppression of existing European regulation concerning data protection [5]. If they succeed, this will undermine a liberty as fundamental as the respect of private life for exclusively economic reasons. This, too, is totally unacceptable!

Two years ago, Guy Verhofstadt demanded that the transatlantic cooperation must respect the rights of European citizens [6] after the revelation of a massive data theft committed by the NSA. It is more than one year ago that Martin Schulz called for a suspension of the negotiations [7] in the context of this debate, and Jean-Claude Juncker advised the Americans to listen to the Europeans, rather than to put them under massive surveillance. [8] Today, as more and more scandals of massive surveillance are being revealed, we demand that these questions are urgently clarified. As a consequence, we call for the immediate suspension of the negotiation of a treaty, which against all the reassuring communications of the authorities, constitutes a severe danger for the future of our democracies, in terms of economic, social, cultural and environmental rights.