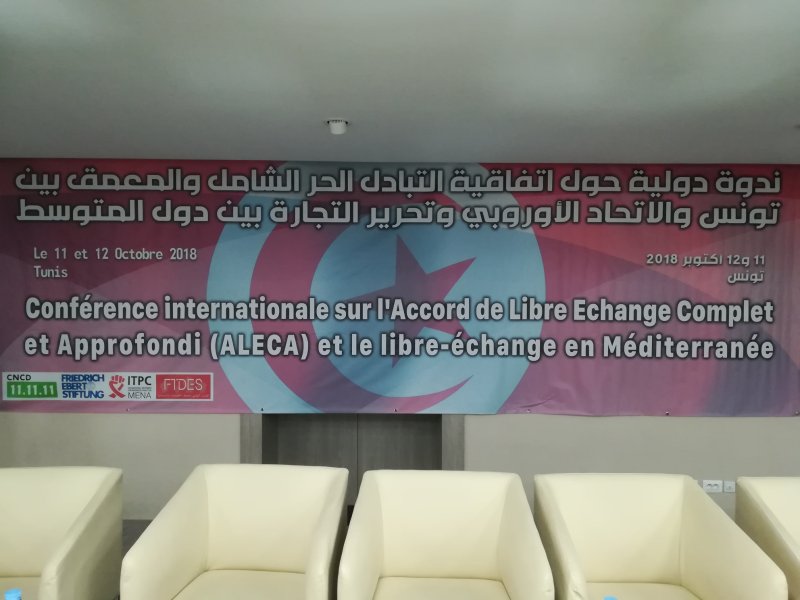 Since April, a number of developments have taken place in Morocco and Tunisia, in particular the fourth round of negotiations in Tunisia. Things were then relatively calm due to the Tunisian legislative and presidential elections. In detail:

Official sources have announced the will to resume negotiations this year. A political declaration was released after the Association Council, that was held the 27th of June 2019.

Interestingly, this declaration states that equality between both parties is an essential principle of their cooperation. It indicates the renewal of institutional relations between Morocco and the EU, as well as the application of their privileged partnership : https://www.consilium.europa.eu/en/press/press-releases/2019/06/27/joint-declaration-by-the-european-union-and-the-kingdom-of-morocco-for-the-fourteenth-meeting-of-the-association-council/

On the economic field, this partnership aims at setting up “an area of economic convergence and social cohesion. This area will be based, in particular, on the implementation of the economic strand of the Association Agreement. This will involve making better use of the possibilities offered by the bilateral trade relationship, the relaunching of negotiations for a Deep and Comprehensive Free Trade Agreement (DCFTA) on the basis of the expected benefits for both parties, the gradual move towards regulatory convergence, close bilateral cooperation regarding customs...”

In this context, some have resumed to speak out against the risks of such an agreement, especially towards the pharmaceutical sector: https://www.ecoactu.ma/laleca-risque-de- prendre-la-dependance-du-secteur-pharmaceutique-marocain-en-otage/

1. Evolution of the negotiations

The fourth round of negotiations was held between the 29th of April and the 4th of May 2019. The report of this session is available at the following link: http://www.aleca.tn/rapport-conjoint-du-quatrieme-round-de-negociation-sur-un-accord- de-libre-echange-complet-et-approfondi-aleca-entre-la-tunisie-et-lunion-europeenne/. Contrary to the last two sessions, no update of the negotiation texts has been published.

The report informs us that for the time being, the Tunisian negotiators do not accept the proposal on intellectual property rights relating to medicines and trade secrets. They made a counter-proposal on public procurement that sets openness as a long-term objective, which does not seem to have been accepted by Europeans. They proposed that investment liberalisation should be done in a positive list and allow for performance obligations as provided for in the WTO framework. However, they have accepted most of the EU’s competition rules (including those on state monopolies and state-owned companies), energy transit, digital trade, have begun to discuss the settlement of investor-state disputes (arbitration). On all aspects related to regulatory harmonization, negotiators seemed to accept while requesting sufficient assistance for upgrading, through a new chapter on support mechanisms, which was proposed. As usual, they insisted on synergy with the mobility of people. All in all, it appears that the Tunisian team is becoming more aware of the risks of the agreement and is trying to minimize some of them. However, their proposals seem to be little debated by Europeans at the moment, referring to their internal procedures.

Rumours of the suspension of negotiations, which appeared in the press in early July, were denied by the authorities. However, in the context of the autumn 2019 electoral calendar in Tunisia, the next round of negotiations is not expected to take place until early 2020, although discussions are expected to continue.

During the presidential campaign, the subject of ALECA was an issue, and a specific question on this subject was asked during each television debate. The FTDES issued a questionnaire on this specific topic. Although no response was received by the candidates, journalists took up the issue following its publication.

The election of Kais Saïed as President of the Republic may lead to a contraction, slowdown or suspension of negotiations, insofar as he supports a cautious approach towards traditional partners of Tunisia and their interests. However, Ennahda (Islamist) movement and Heart of Tunisia (Liberal) party won the legislative elections, which could lead to the continuation of negotiations if they form a common government. Up to now, the formation of the government and its composition remains uncertain.

Following a request for access to documents from the EU (https://www.asktheeu.org/en/request/contacts_about_eu_tunisia_dcfta?fbclid=IwAR1BPB pMGhD5AphBC0BPP-YiKI-_IfC7jV_buePAJf9M3zWOKMRBQ4o8sjQ#describe_state_form_1), meetings’ minutes and speeches were made public. It is reported that a meeting was held on DCFTA with an association of oil producers (excluding olive oil) who want better access to the Tunisian market, and another with an association for the protection of animal welfare. We also learn (minutes of the meeting with Euromed Rights) that the European Commission is seriously considering changing the name ALECA (DCFTA in French) which would now have too negative of a connotation.

In Europe, the Court of Justice did not ultimately invalidate the investor-state arbitration mechanism provided for by CETA in its Opinion 1/17. European civil society and some lawyers have criticized this decision. For example: http://europeanlawblog.eu/2019/05/31/autonomy-and-opinion-1-17-a-matter-of- coherence/

The fourth negotiating session was the occasion for several mobilizations, behind the slogan #BlockALECA, at the initiative of a youth campaign and associations: o On April 30, the civil society consultation session was interrupted by activists (from 14’30’’): https://urlz.fr/aNVL o On May 1, an anti-ALECA demonstration was organized, that joined the union march. The refusal of DCFTA was noticed as the main demand of the day.

This period allowed for a high media exposure, with many articles and events, as well as an interview on national television: https://urlz.fr/aNks

The ARES association and the UGTT (hegemonic workers’ union) launched a national coordination against ALECA in May, which includes associations and political parties close to the Popular Front (left), as well as several unions (UTAP - farmers, UGET - students). On this occasion the UGTT expressed its opposition to the project as it stands.

Prior to the negotiations, the National Chamber of the Pharmaceutical Industry indicated that it disagreed with the intellectual property chapter: https://www.facebook.com/1306982219452518/posts/1329893250494748/

An awareness-raising booklet for citizens, in Arabic, has been published: https://www.rosaluxna.org/wp-content/uploads/2019/08/Guide-Citoyen-ALECA.pdf

Sami Aouadi, Professor and advisor to the UGTT on DCFTA, published with Friedriech Ebert Stiftung a Multidimensional impact study of the Tuniso-European Deep and Comprehensive Free Trade Agreement (DCFTA), in French (not available online yet).

In the frame of the European Commission evaluation of 6 Euro-mediteranean free trade agreements (Algeria, Egypt, Jordan, Lebanon, Morocco, Tunisia), the consortium (Ecorys, FEMISE et CASE) created a website and a newsletter, https://www.fta- evaluation.com/eu-mediterranean/ as well as an online questionnaire on AAs impact, open to contributions until the 17th of November. It is possible to answer in general and/or for a specific country: https://www.fta-evaluation.com/eu- mediterranean/provide-your-input/ . They also ask for suggestions of case studies.

Consultations to present the abovementioned study were held in each country. In Tunisia, criticism was strong against the method used for the economic evaluation, as it evaluates a reintroduction of tariff barriers in 2018, through the results of a calculable general equilibrium model provided by DG Trade. In the words of the economist in charge of the study, this poses a problem of transparency (the model is a black box) and does not measure the impact of the agreement.

The Tunisian government also commissioned its evaluation study, financed by the World Bank and entrusted to EY Tunisia, the results of which were due to be published in March and June this year. This study is long overdue, due to delays in contracting and an overly ambitious timetable. Its approach is also very opaque. See: https://news.barralaman.tn/ue-tunisie-accord-association-ue-tunisie-evaluation-retard/

The Tunisian Observatory of the Economy has published a study demonstrating the dumping carried out by European agricultural policy, and detailing the stakes related to sanitary and phytosanitary standards: https://urlz.fr/aNo5