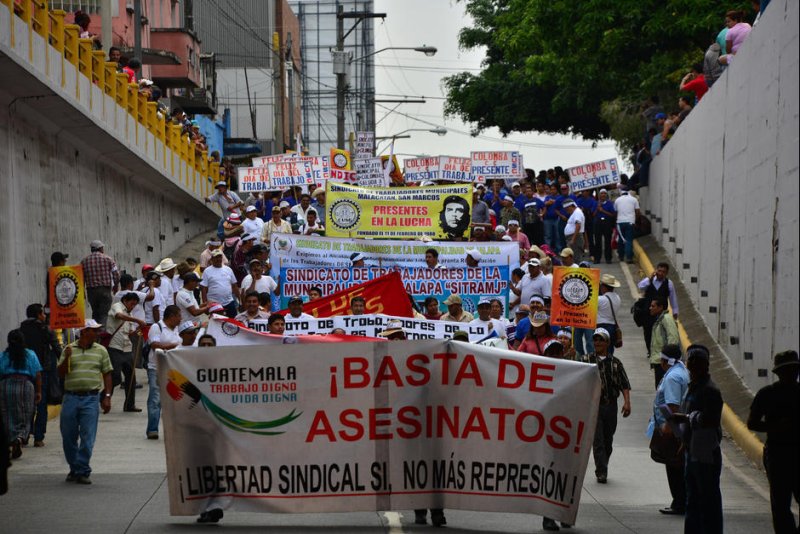 Nine years after workers in the United States and Guatemala joined forces to challenge the failure of the Guatemalan government to abide by the labor chapter of the U.S.-Dominican Republic-Central America Free Trade Agreement, we now have yet more proof that these labor provisions simply do not work. A three-arbitrator panel concluded that Guatemala is in compliance with its labor obligations despite an abysmal labor record, including violence against trade unionists and rampant failure to enforce even the most basic labor protections.

Meanwhile, employers in Guatemala routinely fire and intimidate workers when they attempt to form a union, refuse to bargain in good faith and fail to pay workers what they are owed. For example, three trade unionists were assassinated last year. Workers at the metal company Ternium have been trying to negotiate a contract since 2013, and the employer has refused to come to the table. Bimbo fired 150 workers for union membership and has simply not complied with a court order mandating reinstatement.

The panel’s decision flies in the face of common sense. Guatemala’s failure to protect its workers and enforce its own laws is apparent to nearly everyone except the three arbitrators on the panel. Consider:

Additional Requirements: CAFTA’s labor chapter obligates each party to "effectively enforce its labor laws." However, unlike other chapters, which cover rights that benefit multinational corporations—such as investment—there are additional hurdles to bringing a labor claim that make it difficult to succeed.

Guatemalan and U.S. workers submitted their petition on April 23, 2008, during the George W. Bush administration. The final panel decision was published on June 26, 2017, more than nine years later. The legal maxim "justice delayed is justice denied" is especially fitting here. Even if the United States prevailed in the case, any changes in Guatemalan labor policy would come far too late for the workers who have lost not only their jobs, but in some cases their lives, in the struggle to simply exercise their rights.

Enforcement Is Wholly Discretionary: A related problem is the lack of any requirement to engage in labor enforcement at all. Under both CAFTA and "May 10," there are no mechanism to ensure that submissions receive action, timely or otherwise. Parties "may" request consultations and "may" proceed to dispute settlement but need not do so. As a result, labor issues are only enforced to the extent a government feels like enforcing them. Right now, there are five open labor rights cases under non-NAFTA trade agreements:

Of the 39 petitions regarding labor rights cases under NAFTA, nine were declined outright and three remain pending (one filed in 2008 and two filed in 2011). The remainder were closed without fully addressing the violations—leaving inadequate laws and enforcement regimes in place.

The AFL-CIO has repeatedly recommended replacing the word "may" with the word "shall." Requiring countries to move to the next enforcement step if a case has not been resolved would ensure that vulnerable workers no longer fall into trade purgatory, forever waiting for a foreign government to act on their behalf. Removing the unfettered discretion to ignore cases would ensure resolution of cases before they go stale.

Violence, Intimidation and Impunity Are Not Identified as Violations of the Labor Chapter: Neither CAFTA nor the "May 10" standard identify the use of threats or force against workers to prevent the exercise of labor rights as a violation of that underlying right.

Violence is a primary reason that Guatemala’s labor laws are not "effectively enforced," so this shortcoming is particularly critical and tragic in this case. The government allows threats and violence against trade unionists to occur without conducting meaningful investigations or prosecutions. This creates a climate of impunity, where workers are afraid to speak out and employers are given tacit permission to violate labor laws. Even under the "May 10" standard, the U.S. government largely ignored the violence issue in its preliminary report on the labor petition against Colombia. In fact, a government official told the AFL-CIO that even murder of union activists does not constitute a violation of a country’s labor obligations. Until our trade agreements make clear that threats and violence to intimidate workers is a trade violation, promises about protecting labor rights are not worth the paper they are written on.

The AFL-CIO, along with its affiliates and allies, has developed a labor chapter for NAFTA that will turn labor promises from marketing campaign to reality. Read these new ideas.