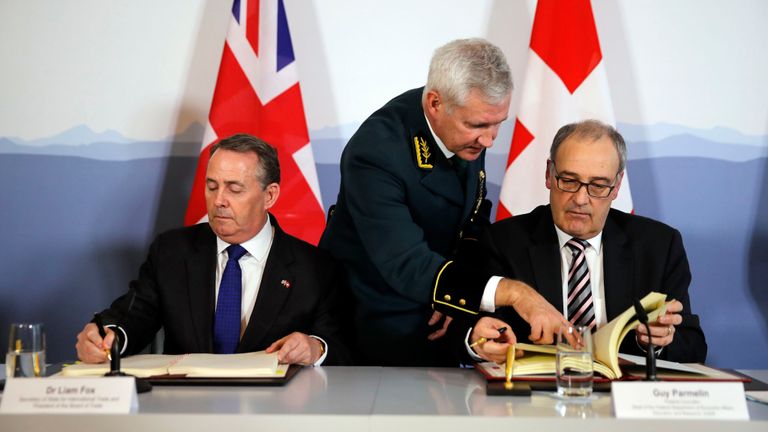 The UK and Switzerland have signed a deal to continue trading after Brexit as they did before it.

The "continuity agreement" - based on the EU’s existing free trade deal with Switzerland - was agreed in December but ratified on Monday.

International Trade Secretary Liam Fox said the deal would "continue the preferential trade that we have".

The UK is seeking to replicate about 40 EU free trade agreements, covering more than 70 countries.

Around £32bn of trade is done between the UK and Switzerland each year, with 15,000 British exporters trading with the country.

Mr Fox said: "Switzerland is one of the most valuable trading partners that we are seeking continuity for. This is of huge economic importance to UK businesses.

"Not only will this help to support jobs throughout the UK but it will also be a solid foundation for us to build an even stronger trading relationship with Switzerland as we leave the EU."

In 2017, Mr Fox said that the UK could "replicate the 40 free trade agreements before we leave the EU" on 29 March so that there would be no disruption to trade.

But with 46 days until the UK is set to leave, such continuity agreements have been signed with only:

Mutual recognition agreements - where a product lawfully sold in one country can be sold in another - have also been signed with Australia and New Zealand.

The director general of the Confederation of British Industry (CBI), Carolyn Fairbairn, said the lack of other trade deals being signed was an "emergency" - particularly in the case of South Korea and Japan.

She told Sky News: "The prospect is the day after Brexit, those deals will disappear."