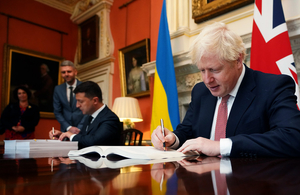 Ukraine and Britain have signed an agreement on political cooperation, free trade, and strategic partnership.

The signing ceremony took place in London during Zelenskyy’s official visit to Britain.

The signing of the agreement was necessary because of Britain’s withdrawal from the European Union.

As Ukrainian News Agency earlier reported, Zelenskyy and First Lady Olena Zelenska met with the Duke and Duchess of Cambridge during their official visit to Britain on October 7.

According to British media reports, Prince William and Kate Middleton received the Zelenskyys on behalf of Queen Elizabeth in the throne room at the Buckingham Palace. This was the first audience with a world leader since the beginning of the coronavirus quarantine.

The Office of the President of Ukraine has removed information about Zelenskyy’s invitation for their Royal Highnesses to visit Ukraine from the president’s official website.