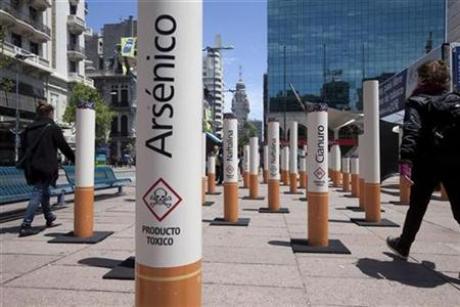 People walk past near an anti-tobacco installation in Montevideo November 16, 2010, as Uruguay hosts the Fourth Conference of the Framework Convention on Tobacco Control in Punta del Este. (Photo: Reuters/Pablo La Rosa)

"The complaint of unconstitutionality is unanimously rejected," the court said in its decision on Uruguay’s restrictions on smoking and tobacco products, the first of their kind in Latin America, introduced in March 2006.

Philip Morris earlier this year filed a complaint with the International Center for Settlement of Investment Disputes (ICSID) of the World Bank, seeking damages allegedly caused by the anti-tobacco measures.

It is "an essential duty of the state... to adopt all measures it considers necessary to maintain the collective health (of its citizens)," said the court.

Philip Morris’ complaint argued that the country’s tobacco laws — requiring large health warnings on packages, banning advertising and use of multiple products for one brand — violate a bilateral investment treaty and harms the company.

The cigarette powerhouse, spun off by its US parent in 2008 and relocated to Switzerland, alleged in its challenge that the ban infringed on individual rights and needed to be passed by national lawmakers instead of a government decree.

The court’s decision comes a day after Montevideo received support from more than 170 countries in its policy of putting public health before commercial interests.

The countries signed a World Health Organization (WHO) tobacco control accord expressing "concern for actions by the tobacco industry which seek to subvert and undermine government policies to control tobacco consumption."

They declared their "firm wish to prioritize the application of health measures destined to control tobacco consumption," at a meeting of the Conference of the Parties (COP) on tobacco control in Uruguay.

Uruguay on Monday also received the support of billionaire New York Mayor, Michael Bloomberg, who through Philanthropies offered the country legal assistance and an expert panel of advisers in its fight against Philip Morris.

According to official data, the smoking population in Uruguay has dropped from 32 percent in 2006 to 25 percent this year. One study showed the number of heart attacks has fallen by 17 percent in the same period.