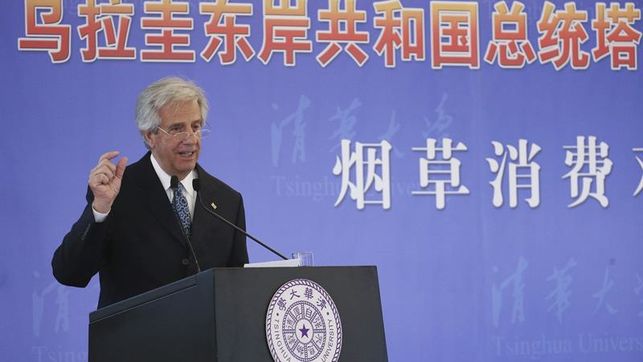 Uruguayan President Tabaré Vázquez has a free trade agreement with China high on his agenda.

In recent years, a stand-out feature of the country’s foreign policy has been its desire for commercial rapprochement with China. This has taken on new impetus under its pro-tempore presidency of Mercosur, a commercial bloc with Brazil, Argentina and Paraguay.

Relations peaked at the recent Mercosur-China Dialogue in Montevideo, resurrected by Uruguay after more than a decade years with no official encounters between the regional bloc and the Asian country.

Vázquez made a commercial agreement the focal point of the meeting but regional partners did not meet the idea with the same enthusisam given the impact it could have on their economies.

“Uruguay put the issue on the table as we are not advancing with the agenda that China wants in Latin America, which are free trade agreements,” said Ignacio Bartesaghi, Dean of the Faculty of Business Studies at the Catholic University of Uruguay.

Since 2015 Vázquez has affirmed his desire for an alliance with China through Mercosur or a bilateral agreement between both partners. This is not currently authorised by the bloc’s rules, which only permit regional alliances.

In 2016, China published a framework document on its policy towards Latin America and the Caribbean where it expresses its desire to “explore the bilateral commercial potential” and specifically mentions the signing of free trade agreements (FTAs) with the countries of the region to achieve stable commercial relations.

However, China’s plan has materialised only partially. It has signed FTAs with Chile, Peru and Costa Rica and has maintained smaller-scale agreements with the many other Latin American countries. Mercosur countries are limited by stricter rules.

“The commercial policy interests of the Mercosur countries are radically different. They do not have the same incentives for agreements,” said Marcel Vaillant, professor in international trade at the University of the Republic of Uruguay.

“Food-producing countries like Uruguay need agreements with Asian countries such as China, since their rivals export to Asia on preferential terms,” he added.

In Argentina, President Mauricio Macri has gone back and forth in his relationship with China, at one point even calling for a review of all agreements signed by his predecessor. Brazil’s President-elect Jair Bolsonaro campaigned with a strong anti-China rhetoric, criticising the impacts of the Asian country’s investments.

As a result, Uruguay has not made progress in reaching an agreement at the Mercosur level and has limited possibilities for the future. However, a new bilateral approach could prosper given the shared desire of Vázquez, Macri and Bolsonaro to relax the bloc’s rules.

“Mercosur has been at an impasse for a long time and its progress has been limited, which explains Uruguay’s rush,” said Sergio Cesarín, coordinator of the Asia Pacific and Indian Studies Center at the University of Tres de Febrero (UNTREF).

“China has stopped thinking about an alliance with the bloc and aims to have a bilateral relationship with the countries of the region,” he added.

Mercosur deputy foreign ministers welcomed Chinese counterpart Qin Gang to Montevideo at the end of October. His visit aimed to advance a common commercial understanding with Uruguay as organiser of the bloc’s summit.

However, with the meeting just a few days before Brazilian elections, progress was limited. Members analysed regional exchanges with China and the potential for closer economic integration.

“Uruguay chose to promote the Mercosur-China Dialogue, but there are no real possibilities for progress because the agenda is ‘bilateralised’. Mercosur itself cannot shut down other complex negotiations that are in progress – and to that Uruguay wants to add an FTA with China,” said Bartesaghi.

At the summit, countries decided to “maintain the dialogue mechanism and agreed to give continuity to build a positive agenda, with the objective of promoting cooperation in areas of mutual interest and promoting trade and investment”.

The Uruguayan Ministry of Foreign Affairs issued a statement in which they considered the meeting as “an important milestone in itself as the Uruguayan pro tempore presidency managed to reunite this dialogue mechanism after 14 years of inactivity”.

In October 2016, Vázquez and China’s president Xi Jinping signed their countries up to a strategic partnership agreement. Since then, there have been many advances at the bilateral level.

Whilst in China in August, foreign minister Rodolfo Nin Novoa, signed a memorandum of understanding to incorporate Uruguay into China’s Belt and Road initiative, becoming the first Mercosur country to be part of the global connectivity scheme.

Uruguayan producers pay US$130 million of import tariffs in China annually. Within Mercosur the figure in US$1.5 billion, more than non-members pay. Nin Novoa has advocated the need for a preferential access agreement between the parties.

“Uruguay pushes agreements with China to export primary products,” said Marcelo Elizondo, an expert in international trade and director of the consultancy DNI. “It is the one most interested in a bilateral relationship within the region.”

China ranked first among Uruguay’s export destinations last year, with sales reaching US $2,5 billion (including through Free Trade Zones). China accounts for 23% of total exports, with beef and soya making up around half of the total. Exports to the Chinese market increased 12% annually on average between 2012 and 2017.

“China knows that more attention will be paid to them operating diplomatically though Uruguay than in Argentina and Brazil. Those are industrially diversified economies and China is a competitive global player. There are industrial sectors that are worried by China,” Cesarin said.

Total exports reached US$840 million during the first six months of the year. Meat, seeds, oleaginous fruits (those which can be used to make oils) and wood were the three main items. Beef represented 46.8% of the total.

At the same time, imports hit US$804 million in the same period. Motor vehicles, organic chemicals, plastics and manufactures were the main items brought in, representing 65% of Uruguay’s total imports.