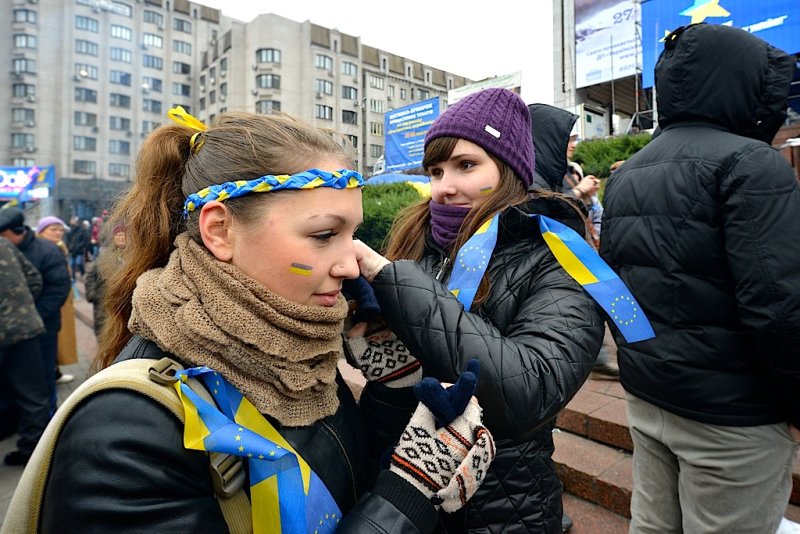 Between 500 and 2,000 pro-EU protesters are still camping out each night in Kiev (Photo: mac_ivan)

BRUSSELS - The US has put Ukraine’s interior minister and a dozen or so officials on a draft sanctions list, but the EU is still willing to hold talks.

The US Department of State list is to be implemented if there is more violence.

It concerns travel bans rather than asset freezes, but both the names and the terms of the sanctions could change depending on events in Ukraine, the sources added.

The so-called Euromaidan continues to see between 500 and 2,000 pro-EU protesters camped out each night behind barricades in central Kiev.

The new tactics involve using hired thugs with no official links to state structures to beat up individual protest leaders, such as journalist Tetyana Chornovol.

They also include short term police detentions of individuals and a blackout on Euromaidan news by loyalist TV stations, such as Inter.

One US source told this website the state department is still holding internal talks on where to draw the redline for the visa ban.

"The state department hasn’t figured out its threshold on new violence. But I am fairly confident that if there were other instances along the lines of 30 November, then the sanctions would follow," the contact said.

The US administration has broad political backing for the move.

Leading Democrat and Republican senators on Wednesday sponsored a non-binding resolution which passed by unanimity and which says: "in the event of further state violence against peaceful protestors, the President and Congress should consider whether to apply targeted sanctions, including visa bans and asset freezes."

Congressmen in the US lower house have also drafted a similar text.

But the administration does not need parliamentary approval to go ahead. Existing US law, such as Presidential Proclamation 7750 or the International Emergency Economic Powers Act, enables US officials to take snap decisions on foreign officials even if they have never been formally convicted of a crime.

The state department’s top man on post-Soviet Europe, Eric Rubin, is said to be taking a big interest in Ukraine because of its geopolitical importance.

The US and the EU have in the past closely co-ordinated sanctions on, for instance, Belarus.

Rubin’s department has also been remodelled to fit the EU’s so-called Eastern Partnership (EaP) policy on pulling former Soviet republics closer to the West amid Russia’s new assertiveness in the region: both Rubin and the EaP cover the same list of target countries - Armenia, Azerbaijan, Belarus, Georgia, Moldova and Ukraine.

But, as in the past, the US is being more hawkish than EU institutions.

Some EU diplomats also believe that "targeted sanctions" on Yanukovych’s political and business allies, who travel and invest in EU countries much more so than in the US, is the best way to promote democracy and rule of law in Ukraine.

"They [Yanukovych’s ruling clan] are proven liars and gangsters," a diplomatic source from one large EU country told this website.

"We should not be holding any more negotiations with them because it would be a betrayal of the Euromaidan and because the only thing it achieves is to help Yanukovych barter for cheaper gas prices with Russia," the contact added.

EU sanctions structures are more complicated than the US system, however.

The EU foreign service has to formally propose punitive measures to the 28 EU foreign ministers, who take decisions by consensus.

The EU’s rotating "Presidency," currently held by Greece, also has an informal role in setting the political agenda.

The foreign service, the European Commission and EU countries then implement the measures if there is a positive decision.

Unlike the state department’s Rubin, the EU foreign service’s top official on Ukraine, German diplomat Gunnar Wiegand, is opposed to sanctions on the grounds that similar measures have done nothing to promote reform in Belarus.

An EU source told EUobserver that if the Yanukovych clan gives "a clear sign underpinned by action" that they are still interested in the treaty, then the Ukrainian negotiator, deputy PM Serhiy Arbuzov, would be welcome back in Brussels.

The contact added that "nobody is discussing EU sanctions, except for the Ukrainian opposition."

The EU institutions are also considering holding a summit with Yanukovych in the first half of the new year if there are no more mass crackdowns.

For his part, Ukrainian PM Mykola Azarov opened a government meeting in Kiev this week by making the kind of noises that Fuele wants to hear.

"We should start practical negotiations on the terms of the signing of an association and free trade agreement with the EU," he said.

Meanwhile, the Greek EU presidency has indicated that it has little interest in Ukraine compared to its predecessor, the Soviet-republic-turned-EU-member Lithuania.

"The EU’s southern neighborhood is of very great importance to us, as it is for other countries. Lithuania, whose presidency just ended, focused on the eastern neighborhood - Ukraine, Armenia, etc. So we are putting an emphasis on the southern neighborhood and we are cultivating relations there," Greek foreign minister Evangelos Venizelos told the ANA-MPA news agency on Thursday, during a meeting with top EU officials in Athens.