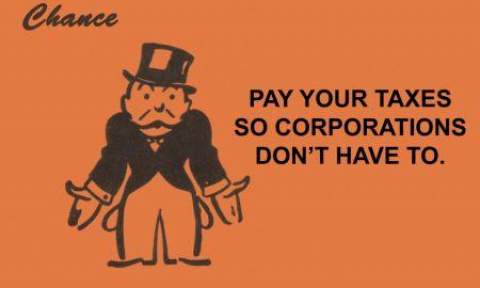 The secretive TTIP could make it easier than ever for big business to sue governments, according to new research.

Multinational corporations could escape paying millions in U.K. taxes under a secretive trade deal between the United States and Europe, according to a report released Monday.

The report warned that, “If the free trade deal being proposed between the EU and the U.S. were to come into force, it would massively increase the ability of corporations to sue member states of the EU over measures such as windfall taxes on exceptional profits.”

The deal, the Transatlantic Trade and Investment Partnership (TTIP), is an agreement currently under negotiation between the European Union and United States.

Like its sister deal, the TPP, the TTIP has raised alarm bells among critics of unbridled free trade. While advocates argue the twin deals will boost global trade, skeptics say the agreements will devastate consumer and environmental protections while benefiting multinational corporations.

Now, the new report published by Global Justice Now and the Transnational Institute has warned investor protections embedded in the TTIP could leave many major companies beyond the reach of national taxes.

“Despite the enormous public outcry over companies like Google and Amazon paying ridiculously small amounts of tax in the U.K., the government is trying to sign us up to a trade deal that could effectively prevent us from bringing about laws that could address tax injustice,” said Nick Dearden, the director of Global Justice Now.

The report pointed to similar investor protections in other trade deals, which have forced at least 24 countries worldwide into international arbitration, often with results that critics argue prioritized corporate profits over public welfare. The main forms of investor protections analyzed were arbitration tribunals, generally referred to as investor-state dispute settlement (ISDS).

One example studied by the report was a dispute between Mexico and a group of U.S. agribusiness giants, including Cargill and Archer Daniels Midland in the early 2000s. The dispute centered around a Mexican sales tax on soft drinks containing high-fructose corn syrup. The tax was aimed at reducing excessive consumption of soft drinks, amid rising obesity rates.

“The ISDS tribunals ruled in favor of the investors, and Mexico was ordered to pay millions of dollars in damages,” the report noted.

The report concluded one of the most disturbing aspects of existing ISDS mechanisms is a lack of transparency.

“Despite the fact that states are on trial in ISDS cases, voters, citizens and ordinary taxpayers have very little access to information about many of these suits. Most hearings are conducted behind closed doors with case documents rarely made public,” the report stated.

Cecilia Olivet from the Transnational Institute said the report showed the evidence “of the dangers of these investment deals continues to mount.”

“Not only do they affect health and the environment and cost taxpayers millions in legal fees, this report shows they also affect the ability of governments to tax corporations effectively,” Olivet said.

She added, “This is yet more money lining the pockets of corporate executives stolen from the public taxpayer. New trade deals such as TTIP … have to be stopped and the public interest defended.”