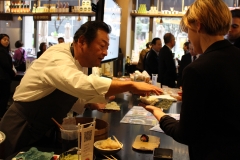 US hints at rice concession in Japan trade talks

Calling rice a "a sort of a cultural issue in Japan," Perdue told reporters the product is an area in which the United States has not been "successful" as Washington and Tokyo work toward sealing a trade deal this month.

But he said any deal, for the most part, "gets us back on parity with our competitors," apparently referring to U.S. farmers being put at a disadvantage due to trade agreements Japan has signed with other countries, including the revised 11-member Trans-Pacific Partnership.

The United States had initially joined the TPP before pulling out in 2017, with President Donald Trump saying he preferred to forge bilateral trade agreements. He has also pushed for a deal to reduce the country’s hefty trade deficit with Japan.

Trump and Japanese Prime Minister Shinzo Abe agreed a bilateral trade deal in principle on the sidelines of the Group of Seven summit in France, in August, and planned to step up work toward signing it on the margins of the U.N. General Assembly in New York later this month.

While details of the agreement are yet to be announced, Japan is expected to cut tariffs on U.S. farm products such as beef and pork to around the same levels as in the TPP.

Whether Japan will set a tariff-free import quota for U.S. rice has been one of the focal points of the talks, given it had agreed in the original TPP to incrementally raise such annual quotas to up to 70,000 tons over 13 years.

"I’m hopeful and optimistic" that Trump and Abe will reach an agreement on the occasion of the U.N gathering, Perdue said.