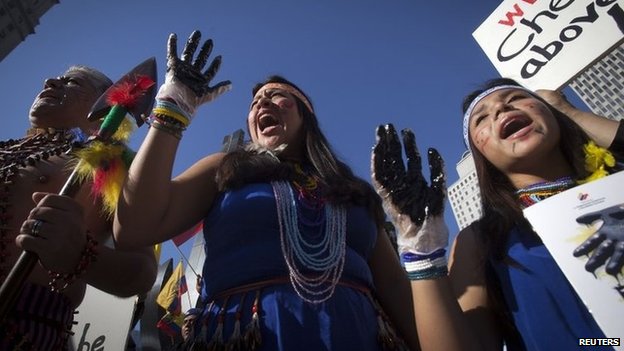 A judge in the US has ruled that lawyers representing Amazonian villagers used bribes to secure compensation worth billions of dollars from oil company Chevron in Ecuador.

The latest ruling means that the Amazonian villagers cannot use US courts to enforce the ruling against the American oil company.

Chevron had been found guilty in Ecuador of causing environmental damage to the Lago Agrio region.

The legal team says they will appeal.

Ecuador’s highest court last year upheld the verdict against Chevron, but reduced the amount of compensation to $9.5bn.

The alleged environmental damage was done by Texaco between 1964 and 1990. Texaco was later acquired by Chevron.

The American oil firm has always maintained that it cleaned up the area before handing over the oil field to the Ecuadorean government.

It argued that it only lost the case because the legal team representing the villagers paid nearly $300,000 in bribes in Ecuador.

"Justice is not served by inflicting injustice," he wrote in the ruling. "The ends do not justify the means. There is no ’Robin Hood’ defence to illegal and wrongful conduct."

Chevron’s chief executive, John Watson, hailed the ruling as "a resounding victory for Chevron and its shareholders".

The legal team representing the Ecuadorean villagers have also sued Chevron in Brazil, Argentina and Canada.

But Chevron believes the US judge decision will help them fight their case in other courts.

Some 30,000 local residents, including five different Amazonian tribes, began the lawsuit against Texaco in 1993.

The plaintiffs say that the oil company knowingly dumped 18bn gallons (68bn litres) of toxic waste water and spilled 17m gallons of crude oil into the rainforest during its operations in north-east Ecuador.

Local residents believe the pollution has led to health problems such as cancer and birth defects.