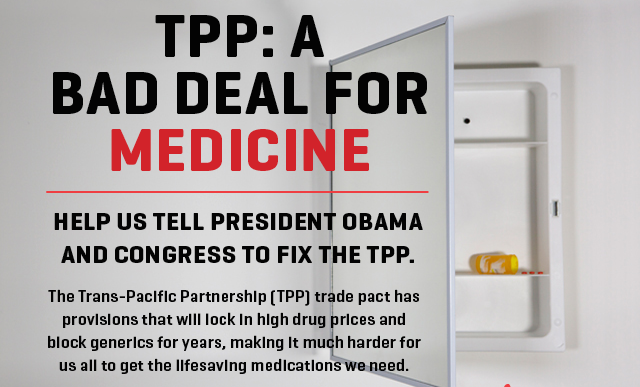 “We are alarmed by reports that US Senate Finance Committee Orrin Hatch says the US administration has “made progress” in talks with Australia and other TPP countries to find a way to increase data protection for costly lifesaving biologic drugs from eight years in the current TPP text to twelve years,”. Dr Patricia Ranald, Convener of the Australian Fair Trade and Investment Network said today.

According to the Bloomberg report, Senator Hatch said “They’re going to have to find a way of having the countries agree to change that formality in the TPP to 12 years…If Australia wants to be part of it, they have to meet our terms,” Senator Hatch added that he and the Australian trade minister discussed how they might solve this problem.

Doctor Ranald said that global pharmaceutical companies already have 20 years of monopoly patents on medicines before cheaper versions become available. Biologic medicines under patent, which treat cancer and other serious disease, cost thousands of dollars per treatment. They are only accessible to patients because they are subsidised by the Pharmaceutical Benefits Scheme. Data protection is a separate monopoly which further delays the availability of cheaper forms of those medicines. The current Australian law is five years for data protection, but the TPP text requires administrative measures which would deliver a “market outcome” equivalent to an extra three years of monopoly, a total of eight years. Studies show that each year of delay in cheaper versions of these medicines would cost the PBS hundreds of millions of dollars.

“The extra three years of monopoly in the current TPP text is already unacceptable. It is outrageous that the US is demanding an even greater increase from 8 to 12 years. We call on the Australian and other governments to reject this proposal,” said Doctor Ranald.

“This demand highlights the flaws in the TPP, which is not about free trade, but is about the extension of monopolies and corporate rights. The TPP would also enable pharmaceutical and other global companies to bypass national courts and sue the Australian government in unfair international tribunals over domestic laws. US pharmaceutical company Eli Lilly is currently suing the Canadian government over a court decision which refused a patent for a medicine.

The Australian government has refused to conduct independent assessments of the economic, health and other impacts of the TPP. Sixty community organisations representing over two million Australians last week called for a Senate inquiry into the TPP, to enable a proper assessment of the TPP before Parliament votes on the implementing legislation.” said Dr Ranald.