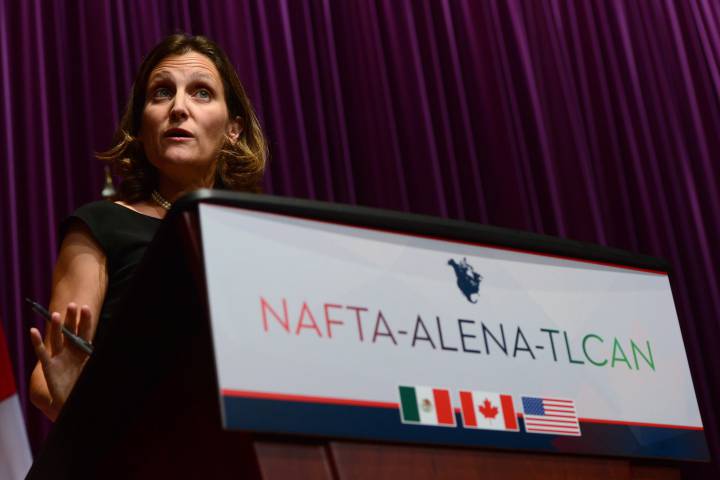 by Lesley Wroughton and Adriana Barrera

The top U.S. trade envoy said on Monday that bilateral deals could replace NAFTA if the pact is not renegotiated soon, ramping up pressure on Canada and Mexico, already smarting from President Donald Trump’s plan to impose steel and aluminum tariffs.

"We would prefer a three-way tripartite agreement. If that proves impossible, we are prepared to move on a bilateral basis," Lighthizer said, reading from a statement in Mexico City at the end of a seventh round of talks.

He also appeared to seek to divide Mexico and Canada in the talks, saying the United States was making more headway with its southern neighbor than with Canada.

The Mexico City round of NAFTA talks was thrown into disarray after Trump announced a plan last week to impose a 25 per cent tariff on steel imports and a 10 per cent tariff on aluminum imports, arguing they were needed to protect U.S. industries and jobs.

Trump tweeted earlier on Monday that "Tariffs on Steel and Aluminum will only come off if new & fair NAFTA agreement is signed."

Lighthizer said that meant Canada and Mexico would enjoy tariff exemptions once a NAFTA deal was reached, calling the tariffs an "incentive" to conclude the talks.

Canada and Mexico say they should be exempted from such moves, and have warned they could retaliate. Canadian Foreign Minister Chrystia Freeland said at the event with Lighthizer that tariffs, which have rattled financial markets, were "unacceptable."

"We should be excluded because the most integrated steel industry in the world is the North American steel industry," Mexican Economy Minister Ildefonso Guajardo said at a later media briefing.

Both Canada and Mexico send more than 75 per cent of their goods exports to the United States.

Guajardo said there would be no concessions made in the NAFTA negotiations to placate Trump on steel and aluminum, while Freeland said the two issues were separate.

Guajardo raised the possibility, however, that Mexico might not respond to Trump’s metals tariffs, saying it was not necessarily beneficial to escalate matters.

Talks on the $1.2-trillion NAFTA pact are moving slowly, in part because Canada and Mexico are resisting U.S. demands for major changes such as adding a sunset clause, which would lead to the automatic termination of NAFTA if it was not reworked every five years.

The Trump administration also wants to boost the North American content of autos produced inside NAFTA.

Lighthizer said only six chapters had been concluded since talks began in August. Negotiators are working on 30 chapters overall, including, he said, including a new one on energy.

His Canadian and Mexican counterparts in the talks, speaking at the same event, signaled they were willing to keep negotiating until a good deal was struck.

Uncertainty over the talks, and the potential for a wider global trade war, are making investors nervous. Trump’s tweet helped push the Canadian dollar down to C$1.2988 to the U.S. dollar, the lowest level since July 7, 2017.

Negotiators had hoped to wrap up their work with an eighth and final session by the end of March, but officials say they will not now meet that deadline.

Officials have so far been evasive when asked how the three nations can keep trying to update NAFTA at a time when Trump is about to take a highly protectionist measure.

Trump also said Canada had to treat American farmers better and called on Mexico to stop drugs "from pouring into the U.S."

A White House representative did not respond to a request for comment on Trump’s statement.

Mexican Foreign Minister Luis Videgaray, in a separate tweet, said efforts to combat drug trafficking were a shared responsibility. Canadian officials did not respond to requests for comment.