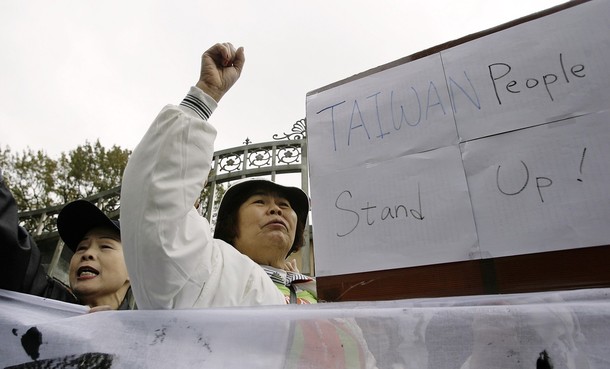 Women protest against the government’s policy allowing the import of US bone-in beef in Taipei on January 5, 2010. (Reuters)

Taipei, Jan. 26 (CNA) — U.S. scholars said Tuesday Taiwan should not dismiss the possible fallout from the U.S. beef row and they suggested that the U.S. take the case to the World Trade Organization (WTO) for resolution.

Taiwan’s reinstatement of a partial ban on U.S. beef imports, achieved earlier this month through a law amendment, was seen by the U.S. as a unilateral abrogation of a beef protocol signed between the two sides last October.

Taiwan should not dismiss the damage the issue could cause, because "at the minimum it has slowed down the negotiations" of the Trade and Investment Framework Agreement (TIFA) between both sides, said Alan Romberg, a senior fellow at the Henry L. Stimson Center.

The best way for the U.S. to resolve the issue is to go through the WTO’s trade dispute mechanism, Romberg said in a digital video conference on recent cross-Taiwan Strait developments, organized by the American Cultural Center.

The WTO mechanism is a multilateral system of settling disputes between its members. According to the WTO Web site, a dispute is usually settled in 12 months without appeal or 15 months with appeal.

Countries in dispute can settle their differences at any stage of the process, it states.

Bonnie Glaser, a senior fellow at the Center for Strategic and International Studies (CSIS), expressed a similar view, saying that while beef imports account for only a tiny portion of U.S.-Taiwan trade, it’s best for the U.S. to put the matter in the hands of the WTO.

"Our (U.S.) Congress actually changed (domestic) laws to make sure they are WTO consistent and compliant. It seems to me Taiwan’s Legislative Yuan is just the opposite, " Glaser said in response to a comment the U.S. Congress had not ratified or approved some agreements in the past.

The agreements or protocols that the U.S. Congress did not ratify were international agreements involving many countries with different positions — not bilateral agreements that had already been signed, she explained.

By taking the case to the WTO, the U.S. will also be able to "depoliticize" the issue, Glaser said.

"It takes time. This case will never be resolved quickly... but I believe whatever decision the WTO makes, Taiwan and the U.S. will accept," she said.