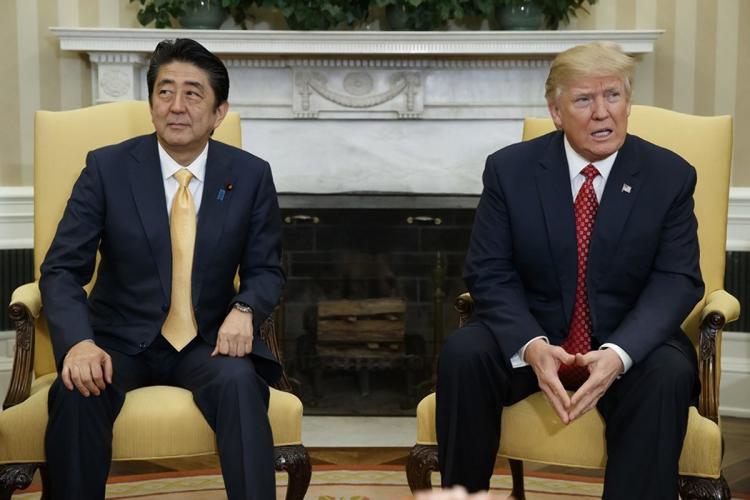 US tightens pressure on Japan for bilateral trade deal

Washington: The US is making a tougher push for Japan to begin talks on a bilateral free trade agreement, exploring demands on foreign exchange policy and exports, as Prime Minister Shinzo Abe prepares to visit the country this week.

President Donald Trump tweeted Thursday that Japan "has hit us hard on trade for years!" In a report published the following day, the US Treasury Department said it "remains concerned by the persistence of this large bilateral trade imbalance" with Japan. The department cited a nearly $70 billion surplus for Japan last year in terms of goods, though the figure shrinks to $56 billion when services are included.

Washington has repeatedly asked Tokyo to sit at the negotiating table, an official from the US Trade Representative’s Office said, adding that it was now just a matter of timing.

Trump and Abe are scheduled to meet on Tuesday and Wednesday in Florida.

With the US headed for midterm elections in November, the White House faces strong pressure from agricultural groups and other players to ink a trade deal with Japan. Tokyo recently signed onto a revised version of the Trans-Pacific Partnership with the 10 other members remaining in the trade pact following the US departure last year. The revised TPP ultimately will lower Japanese tariffs on Australian beef to 9%, while the US continues to endure a 38.5% levy, putting American producers at a disadvantage.

The automotive industry contributes the most to the Japan-US trade imbalance. But Japan already scrapped its tariff against American cars, while the US maintains a 2.5% tariff on passenger cars and a 25% levy on pickup trucks from Japan. Instead of further discussions on tariffs, the American automotive industry wants measures that prevent Japan from weakening its currency, a White House source said.

The US unilaterally announced an agreement on a similar foreign exchange policy with South Korea when the two countries renegotiated their trade deal. Washington also persuaded Seoul to accept a quota on steel exports.

Trump has yet to demand bilateral trade negotiations in his face-to-face meetings with Abe, choosing to prioritize their partnership against North Korea’s nuclear program. The influence in the White House of current and retired military officers, who typically value the US-Japan alliance, also has played a role.

But the honeymoon between Trump and Abe seems to be ending. As Trump seeks direct talks with North Korean leader Kim Jong Un, Japanese cooperation becomes less important. The military players are losing influence in the administration. H.R. McMaster departed his role as national security adviser, while chief of staff John Kelly is reportedly at odds with Trump.

Trump lacks significant business experience in Japan and has little interest in the country, a White House source said.

On Thursday, Trump ordered US Trade Representative Robert Lighthizer to look into the possibility of rejoining the TPP. But exiting the deal was one of Trump’s most popular campaign promises among his Midwestern supporters. The president is expected to call for an overhaul of the regional trade pact if Japan urges him to return to the framework.