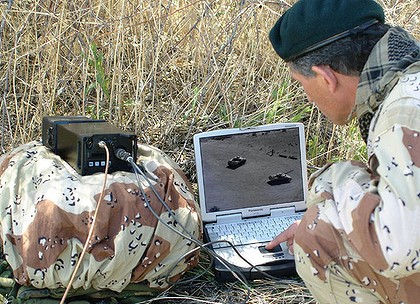 An unidentifed US soldier monitors a live video feed from an aerial source. Australian companies no longer need export licences to sell to the US military. Photo: Bloomberg

US to fight cyber wars with free trade

Selling Aussie technology to the US military just got easier.

Australian technology companies have been given a small pair of scissors with which to cut some sizeable red tape in bidding for US defence contracts.

Among many others, a bill was passed by the Federal Parliament on Monday that eliminates the need for export licences for companies seeking to sell their technology or services to the American armed forces.

It extends the closer military alliance – announced during US President Obama’s visit to Australia last week - from the ground into cyberspace and is line with the Joint Statement on Cyberspace issued by US Secretary of State Hillary Clinton and Foreign Minister Kevin Rudd in September.

At the time, Rudd said closer cyber cooperation was vital because cyber attacks not only threaten governments, they also threaten world economies.

"Like terrorism, it’s a battleground that is fought unconventionally, often without a known enemy. That is why it is critical that this become a formal part of our alliance deliberations and committed cooperation in the event of such attack in the future," Rudd said.

Matthew C. Freedman, senior advisor at US Special Operations Command at the MacDill Air Force Base in Florida and an expert on global transnational issues, said the statement meant "a huge opportunity" for Australian companies to bid for US defence contracts.

Until now, Australian companies that needed access to defence items or technology from the United States had to seek an export licence from the US Department of State in accordance with their International Traffic in Arms Regulations, or, ITAR system. The treaty removes the requirement for individual licences to be obtained for each export.

Passage of the bill officially opens the way for Australian and US companies to sell to each other’s governments, with Australia potentially gaining the most from the move, given the bigger American market.

Suzanne Campbell, CEO of the Australian Information Industry Association (AIIA), said it was "an outstanding opportunity" for locally-grown technology companies.

"Anything that removes barriers to trade and helps Australian companies in the global market is great," Campbell said.

"Australian companies are innovative, agile and capable of demonstrating exceptional contribution to the development of new [defence] solutions."

However, Kee Wong, managing director of e-CentricInnovations, a Melbourne-based company that supplies software to various Australian government agencies said the new trade framework was not a guarantee of success.

"You still have to be competitive in comparison to other offers around the world. Australia probably isn’t well-known for technology in defence – the nation that has built a strong reputation in this area is Israel," Wong said.

"Australian companies will be able to take advantage of increased commercial opportunities through the ability to respond to requests for bids in the US where the contract documentation contains controlled unclassified technology information."

Ovum research director, public sector, Kevin Noonan said it was a step in the right direction.

"In any defence work, having a good deal is just a small part, navigating the red tape can be worse," Noonan said.

The Canberra-based analyst said the treaty and the bill would also make it easier for Australia’s defence forces to procure technology from the United States, but this shouldn’t be feared as it would lead to healthy competition.

"Australian companies have been a bit insulated from US competition, but that is the wrong type of protectionism - protectionism by bureaucracy – it creates inefficient markets."

"A likely implication will be more purchasing from the US, because it is bigger. That provides an incentive for our companies to look further.

"A software company that was wanting to get involved in the defence industry had to put up a lot of money and time to put (export) licences in place. It was quite a closed shop. Now it provides encouragement for developers." Noonan said.

The bill requires new measures be put in place to administer the new order. These include a Treaty Management Board, a system to admit companies as members of the Approved Community able to sell without licenses and, importantly, a new IT system to "support the treaty and strengthen export controls".

Minister Clare said the new IT system would replace an export control system that has been in operation for almost 20 years.

He said the procurement process to select a partner to develop and implement it was underway, with a contract expected to be signed early next year.

The bill also provides for the electronic transfer of technologies and for brokering of goods and services, another area where Australian companies may benefit.