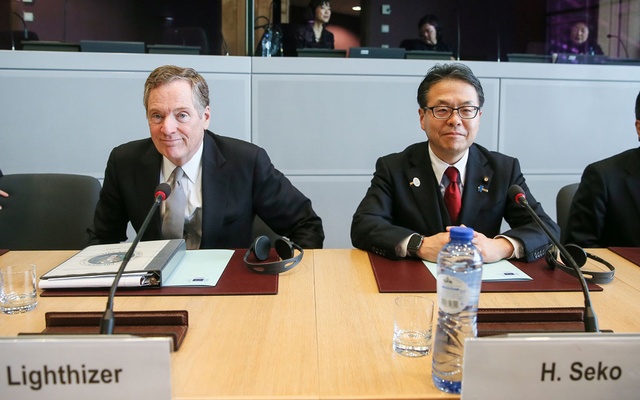 USTR to hold hearing in Dec. on trade talks with Japan

WASHINGTON (Kyodo) — The Office of the U.S. Trade Representative will hold a hearing on Dec. 10 regarding bilateral trade negotiations with Japan that Washington plans to launch in mid-January, the Federal Register said Friday.

The event will take place as U.S. Trade Representative Robert Lighthizer suggested President Donald Trump’s administration will push Japan to address tariff and nontariff barriers in sectors such as automobiles, agriculture and services.

"Our aim in negotiations with Japan is to address both tariff and nontariff barriers and to achieve fairer, more balanced trade," the register said.

The USTR will also accept submission of written comments, notifications of intent to testify and testimony summaries by Nov. 26, it said.

The register said that if necessary, the hearing will continue into a second day.

Senior U.S. Agriculture Department official Ted McKinney has expressed optimism that negotiations with Japan would not take a long time because the two countries have "templates" that could serve as starting points.

"I don’t think it’s going to take (a) year or years. Think of the templates that are already there," McKinney, undersecretary for trade and foreign agricultural affairs, was quoted as saying Tuesday by Inside U.S. Trade, a U.S. media outlet.

Trump withdrew the United States from the TPP last year, but Japan has remained as a main promoter of the regional FTA.

"They have their own trading partnerships," McKinney said of Japan. "They’ve done a free trade agreement with Europe. That’s some template language. We’ve just finished USMCA (the U.S.-Mexico-Canada Agreement). There’s some wonderful language there."

"TPP has some terrific language specific to agriculture," he was quoted as saying.

However, The United States and Japan have shown gaps over bilateral trade negotiations to be led by Lighthizer and Toshimitsu Motegi, Japan’s economic revitalization minister.

Agriculture Secretary Sonny Perdue has urged Japan to reduce tariffs on agricultural products below levels agreed to under the TPP.

Perdue made the push despite the understanding between Trump and Japanese Prime Minister Shinzo Abe that the United States would not demand deeper farm tariff cuts than levels Japan has agreed to in other trade pacts such as the TPP and the Japan-EU FTA.

Separately, Treasury Secretary Steven Mnuchin has called for the inclusion of a provision to prevent currency devaluations into a deal with Japan.

source: The Mainichi
Japan US
Subscribe to bilaterals.org weekly