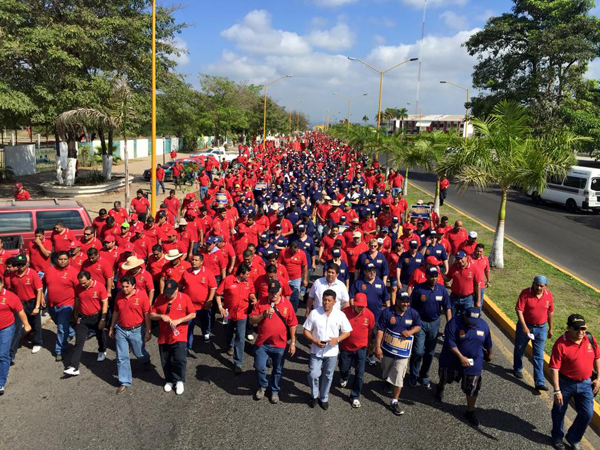 In 2006, members of the National Union of Mine, Metal and Steelworkers, known as Los Mineros, struck to protest an attempt by President Vicente Fox to remove the union’s elected leader, Napoleón Gómez Urrutia. The government responded by sending in the military, who killed two workers – Hector Alvarez Gómez and Mario Alberto Castillo Rodríguez – and injured many more. No officials were prosecuted for the deaths.

“After three decades of NAFTA, Mexican workers are still denied basic rights,” USW International President W. Leo Gerard said. “We need to make workers’ rights an enforceable part of any re-negotiation of NAFTA, and I hope the European Union will make the same demand in its trade negotiations with Mexico.”

Addressing a rally before the march, Gómez – who now leads the union from exile in Canada because of threats from the Mexican government – thanked the global labor movement for its solidarity and demanded justice for the murdered union members.

“We need a revolution in Mexico,” Gómez said. “Not a revolution of violence but a democratic revolution against a government and greedy corporations that are repressing and killing workers.”

USW District 7 Director Mike Millsap compared the deaths of the Los Mineros members to the Memorial Day Massacre in 1937, in which police fired on a peaceful march by striking workers at Republic Steel in Chicago, killing 10.

“Our history is your history and our fight is your fight,” Millsap said.

“No one can build a wall high enough to stop the solidarity between our unions,” said District 12 Director Bob LaVenture, describing the fight of Mineros and Steelworkers against Grupo Mexico, the Mexican mining company that owns Asarco in the United States.

Following the rally, USW members from five Districts – 2, 3, 4, 7 and 12 – and members of Unite, which partnered with the USW to form the global union Workers Uniting, joined the Mineros in a march to the monument to the fallen workers at the plant gate.

The USW is the largest industrial union in North America, representing workers in a range of industries including metals, mining, rubber, paper and forestry, oil refining, health care, security, hotels, and municipal governments and agencies.