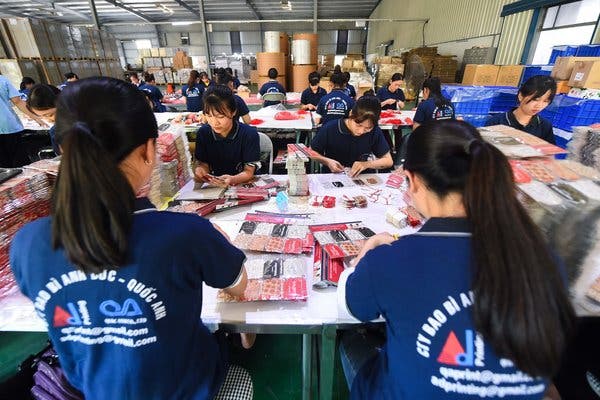 n June 30, after almost seven years of discussions and negotiation, pen was finally put to paper on the European Union-Vietnam Free Trade Agreement – or the EVFTA, as it is commonly known. The economic justifications are apparent for this deal, the second free-trade agreement Brussels has struck with a Southeast Asian nation, after one with Singapore earlier this year. The EU is Vietnam’s second-largest export market, after the United States, and last year Vietnamese exports into the bloc were worth $42.5 billion, while Vietnam imported $13.8 billion worth of goods from the EU, according to official data. Some estimates contend that exports from Vietnam into the EU will be up to 20% by 2020 as a result of the deal, which will eventually remove 99% of all tariffs on trade, and boost Vietnam’s GDP by as much as 3.25% within a few years.

Less justifiable, however, is why the EU would choose Vietnam as the country to conduct the bloc’s “most ambitious free trade deal ever concluded with a developing country,” as EU Trade Commissioner Cecilia Malmström put it. Vietnam is arguably the region’s worst violator of human rights, and it unapologetically remains a one-party state dictated by an increasingly aggressive Communist Party. There has been strong opposition within the European Parliament (which could still scupper it) over the EU basically rewarding an undemocratic, authoritarian nation. It follows opprobrium directed at the European Commission for signing a trade deal earlier this year with Singapore, a Southeast Asian city-state that has been run by the same party since its independence in the 1960s, and for a deal signed on June 28 with Mercosur, the South American customs bloc, which has been criticized by environmentalists.

The EU’s deal with Vietnam is considered hypocritical by many Asian nations. After all, in February, the EU started an 18-month process that could remove Cambodia from its preferential Everything But Arms (EBA) scheme over the country’s democratic backsliding in recent years. The EU could do the same with Myanmar. But the political stranglehold Cambodia’s ruling party has put over the country over the last two years is not as woeful as political conditions in Vietnam, where the Communist Party has never even entertained the thought of a multi-party system and is busier than ever arresting its critics.

Granted, preferential trade schemes and free-trade deals are different entities. The former typically come with political conditions while the latter do not. And the EU could argue that it even has a legal obligation to investigate Cambodia’s place in the EBA scheme, since it is conditioned on human rights progress. Yet many in Asia will remember that the EU rewarded one country and punished another for seemingly the same thing, and the EU won’t be able to walk back from its decisions.

Against its critics, the EU has claimed the EVFTA has a “strong, legally binding commitment to sustainable development, including the respect of human rights, labour rights, environmental protection and the fight against climate change.” For instance, it contains a chapter that pushes Vietnam to ratifying core International Labour Organization conventions, which would liberalize the economy, while an “association agreement” sets out new dialogue structures for the EU to discuss human rights issues with the Vietnamese government. “We are concerned about some of the human rights situations in Vietnam, and of course, a trade agreement is not going to take all that away, but it creates a platform together with the association agreement to continue to engage, to push, and to work with the Vietnamese authorities to improve the situation,” Malmström told Radio Free Asia in early July.

Nonetheless, reading between the lines it is clear that EU leaders understand why they are being criticised for prioritizing trade over human rights. But it is a sacrifice that is worth making, appears to be the message, especially if there is to be a fundamental change to European foreign policy, as almost every EU politician and observer thinks there must be.

Toomas Hendrik Ilves, the former Estonian president, was onto something when, speaking last year, he noted that traditionally “member states prefer to leave the dirty work to the EU to remonstrate to countries about human rights” while they pursue their own commercial relations with questionable nations. But this dynamic is changing. Over the last two years, the EU has been rushing through free trade deals, with the likes of Canada, Mexico, Singapore, Japan and now Vietnam, and is in deep talks with India, Australia and New Zealand, among others. It also soon hopes to sign deals with Indonesia, Asia’s fourth-largest economy, by GDP (PPP), and Malaysia. A FTA with the entire Association of Southeast Asian Nations (ASEAN) bloc has been talked about but now appears muted in favor of deals with individual nations.

What is different is that compared to the past, when the EU would do the “dirty work” on human rights criticism, Brussels now still has to do such criticism at the same time as expanding its own commercial interests with potentially the same offenders, as the case of Vietnam shows. In many ways, this all comes back to the stated foreign policy goals of the EU as laid out in its“Global Strategy for the European Union’s Foreign And Security Policy,” released in June 2016. “The EU will promote a rules-based global order. We have an interest in promoting agreed rules to provide global public goods and contribute to a peaceful and sustainable world,” it stated, while adding that defending human rights and democracy are paramount. “Trade policy must be led by our values” is a refrain commonly said by Malmström. Yet the global strategy added: “Principled pragmatism will guide our external action in the years ahead.”

But the EU, if it is to play a more dominant role in world affairs, is never going to ably balance its principles and pragmatism – or allow trade policy to be determined by values – just as any other major power, including the US, which often has to do deals with unsavory partners, cannot. Indeed, if the EU’s decision to sign the EVFTA wasn’t that principled, it was certainly pragmatic. Malmström’s comments have certainly sounded pragmatic, if not rather realpolitik. “With Vietnam, we know that there are problems in the human rights area. Nobody denies that in any way. But we still think that a trade agreement is good economically,” she said earlier this month.

Such debates will only become more common and important as the EU deepens its engagement with global partners, many of whom won’t be democratic, and as it tries to discard it image as only a soft power in the world. The EU no longer wants to be, in the words of former German foreign minister Sigmar Gabriel, “a vegetarian in a world of carnivores.” Showing that it is prepared to work with undemocratic nations but also demand human rights progress – as is the case with its Vietnam deal – would make the EU look a little more omnivorous.