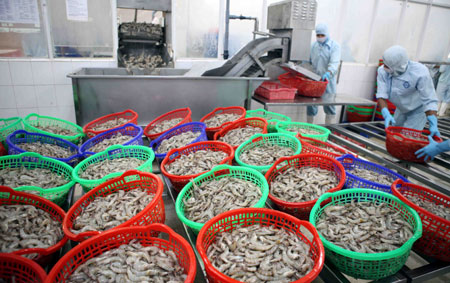 HANOI — While the government hopes the free trade agreement with South Korea will bring benefits to Vietnam, businesses fear it will bring them more losses than gains.

The FTA signed last month is expected to boost Vietnam’s exports to Korea and more than double bilateral trade over the next five years, the government said.

Under the pact, import tariffs on garment and textile shipped to South Korea, now at 8-13 percent, will be abolished.

They make up Vietnam’s biggest exports to that country, accounting for $587 million in the first four months of this year, or nearly a quarter of the total exports to the market, according to the Vietnam General Department of Customs.

However, Vietnamese producers said they stand to gain little from the FTA. Most textiles and garments exported to Korea are produced by Korean-invested businesses in Vietnam, Bui Trong Nguyen, general secretary of the Ho Chi Minh City Association of Garment Textile Embroidery and Knitting, said.

Almost none of the association’s 200 members export to the market.

Besides, compared to the US or EU, South Korea is a small garment market, with buyers often making small orders of just 3,000-5,000 pieces, another industry insider said.

Next year Korea will also remove tariffs on prawn imported from Vietnam, currently at 10-15 percent, raising hopes of expanding exports of the product to the market. Korea is Vietnam’s fifth biggest shrimp importer while last year Vietnam surpassed China to become the biggest exporter to Korea.

However, Le Van Quang, general director of seafood producer Minh Phu, said it is not easy for local seafood enterprises to increase exports to the market because there is a quota for Vietnamese shrimp of only 10,000 tons enjoying zero tax.

This is less than a third of annual exports, and the quota will be increased by 10 percent every year until it reaches 15,000 tons.

Echoing Quang, the head of a seafood company in Ho Chi Minh City said he does not expect much benefit from the trade pact.

South Korea may impose non-tax barriers, such as quarantine regulations, to limit the entry of imported products, he said.

Despite lower import tariffs under some other FTAs, many local companies have failed to increase their exports because of such barriers, he added.

The FTA with South Korea would not help reduce Vietnam’s trade deficit with that country and could even increase it, Pham Khac Tuyen of the Ministry of Industry and Trade, Asia-Pacific Department said.

Increasing demand for machinery and equipment by South Korean firms seeking to expand their business in Vietnam to enjoy the benefits brought by the trade pact would also contribute to this, he added.

Trade between Vietnam and South Korea last year rose 6 percent from 2013 to a record $29 billion, three-quarters of which were Vietnam’s imports, government data shows.

The FTA covers a range of areas from goods and services to customs, trade protection and technical barriers to trade.

Nguyen Ton Quyen, general secretary of the Vietnam Timber and Forest Product Association, said the current 3-6 percent tariffs on some woodwork products exported to South Korea would be removed after the trade pact comes into effect next year.

With imports of more than $300 million last year, South Korea was Vietnam’s fifth largest woodwork market after the US, EU, Japan, and China.

However, local woodwork producers are concerned that Korean firms would expand investment in Vietnam to take advantage of the trade deal. Quyen said with their limited financial capacity and experience, local producers would be unable to compete with foreign rivals even at home.

South Korea is the biggest investor in Vietnam, with $38 billion in more than 4,200 projects.

Auto companies have similar concerns since the FTA will see import duties on auto parts decrease to 0-5 percent from the current 14-20 percent. Local producers will then face intense competition when cheaper South Korean products enter into Vietnam.

Bui Ngoc Huyen, chairman of the Hanoi-based Xuan Kien auto company, said, "If the government is not going to issue preferential policies for the auto industry soon, it will be too late.

"Local manufacturers cannot compete with the prices of imported parts, which are getting cheaper and cheaper."

Nguyen Van Nam, former head of the Institute for Trade Research, said local enterprises should not worry about the challenges posed by FTAs since economic integration is indispensable for development.

They just need to perform better to adapt to the new situation, he added.