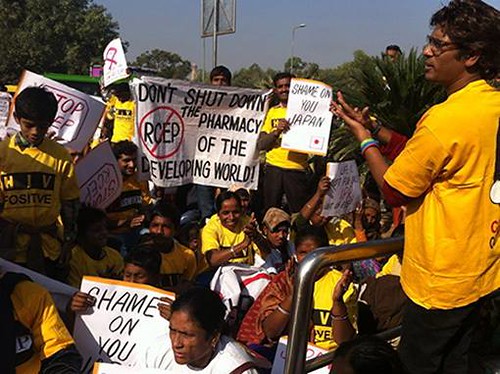 What is RCEP and why are Trade Unions in the Asia-Pacific Region concerned about It? By People Dispatch

15 countries in the Asia-Pacific signed into effect the world’s biggest trading bloc, on Sunday, November 15. The Regional Comprehensive Economic Partnership (RCEP) is a free trade agreement signed between the 10 member-nations of the Association of South-East Asian Nations (ASEAN), along with Australia, China, Japan, New Zealand and South Korea. The agreement was signed at a virtual ASEAN meeting, hosted by Vietnam, along with their FTA partners, excluding India.

RCEP will have to be ratified by each of the members to come into effect. Leaders of the summit expect the ratification process to be completed within two years time. Once in full effect, the agreement will pave way for the largest free trade bloc, covering close to 30% of the global population and the global GDP. India, which was part of the eight-year-long talks, withdrew from the negotiations a year ago as the talks finalized, owing to domestic pressures.

The agreement is seen as a successor to the Comprehensive Economic Partnership for East Asia (CEPEA) that Japan had proposed earlier, and was also expected to include India. RCEP was first proposed at an ASEAN summit in 2011 and official negotiations began in 2012.

The detailed agreement was released on the same day with a stated objective to eventually establish a regional bloc that will “eliminate” tariff and non-tariff barriers and also “restrictions and discriminatory measures” on trade and competition. RCEP will also seek to standardize the rules of origins of traded goods, and will also provide for disputes to be settled at a supranational level.

In a statement released by the Asia Pacific Forum on Women, Law and Development (APWLD), women’s rights groups expressed their anger towards the signing of the deal. The statement said that RCEP “will most likely undermine production of more affordable generic versions of life-saving medicines, negatively impact farmers and indigenous peoples’ rights to seed and food sovereignty, lock-in privatization of public services, push workers’ wages down and constrain the creation of decent jobs, and restrict the ability of governments to introduce industrial and fiscal policies necessary to protect and regulate in the public interest.”

Trade Justice Pilipinas, a group dedicated towards trade justice for global south countries, criticized the deal being pushed through during the COVID-19 pandemic, and questioned the wisdom of the leaders pursuing a neoliberal trade model at a time when the world is questioning its efficacy.

“RCEP will further prop up a broken economic model that we need to radically transform in favor of one that is more resilient,” reads their statement. “The COVID-19 pandemic and the global economic slowdown should have prompted a pause in these negotiations instead of the acceleration that happened. States should be made accountable for committing to new obligations under this agreement that would be detrimental to the public interest. This is an agreement that will be forged by governments without the consent of the people.”

Just days ahead of the signing of the treaty, a press conference was hosted by Public Services International (PSI) on November 12, bringing together voices that raised the same contentions. Kate Lappin, regional secretary of PSI’s Asia-Pacific arm, outlining the concerns of the trade unions, pointed out that the “main concern that the unions have about these trade agreements for decades now, is that they reflect the interests of multinational corporations.”

“They clearly are to the benefit of foreign investors, not even domestic businesses. In doing that, they ensure a race to the bottom for wages and (work) conditions.”

Lappin’s statement is not without a reason, since a large part of the RCEP, which according to an analyst at the South China Morning Post is “meant to pull the center of economic gravity”, is focused on attracting greater international trade and investments into the region.

The issue was complicated even more by the extremely confidential nature of the negotiations. Details of the agreement were not released until after it was signed by the respective members. Not even members of the respective national legislatures were intimated what the agreement would entail and the requirements it would set on members to enter the arrangement, until Sunday.

But much before the signing of the documents, activists got a hint of the negotiations by 2017, when leaked documents revealed the direction the final deal was set to take. Among them were discussion of limiting fiscal sovereignty on members, for provision for corporations to sue governments under a binding tribunal, and Japan’s push towards a more rigid set of provisions for intellectual property rights at the time.

In India, these documents prompted major pressures from domestic manufacturers, especially the extensive generic medicines industry, along with trade unions and farmers’ movements. India eventually walked out during the last leg of negotiations.

The final agreement would significantly limit governments’ control over capital outflows, with very few exceptions. The disputes resolution mechanisms for signatories of the deal allows for signatories of the deal or even multinational corporates to seek a supranational tribunal to sue governments on policy changes. While the agreement makes no mention of labor protections or environmental regulations, it opens up scope for wholesale liberalization of national economies.

Expanding on Lappin’s concerns of the race to the bottom, Philippines senator Risa Hontiveros, pointed out at the press conference that the Philippines is already going through an alarming recession because of the pandemic.

She stated that RCEP “worsens the trade balance” as it would encourage imports of luxury goods and even rice in her country, affecting the national economy. This was also echoed in the statement by Trade Justice Pilipinas, that estimated that trade deficits could balloon up to USD 900 billion. Similar concerns were raised in other poorer nations like Cambodia and Indonesia, where many see a ballooning trade deficit could push their countries down the spiral of austerity over time.

Even though the final agreement allows for poorer nations to maintain their fiscal and policy-making autonomy, Lappin had explained how it means very little within the framework of a free trade agreement. “FTAs… increase the pressure on governments to privatise, as public services need to be traded and compete on the market. This will have negative impacts on equality, including corrosive impacts on gender equality.”

“(During the pandemic) countries had to resort to multiple measures that can be construed as breaches of the trade rules in RCEP and other free trade deals. By constraining the policy space of future governments, deals like this are constraining the potential for future pro-worker governments to alter the economic rules,” she added.