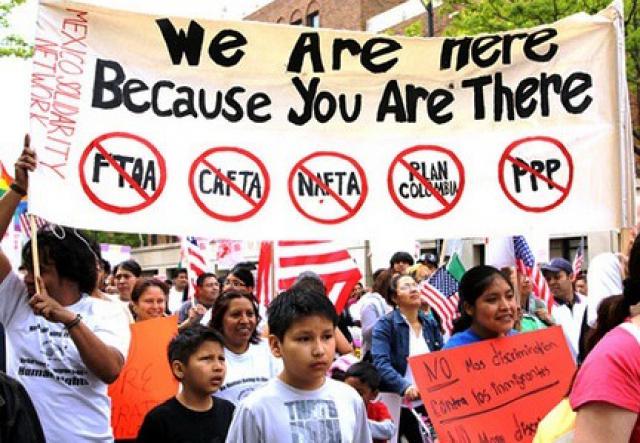 What will the Trump presidency mean for Latin America? By Simon Whistler

WASHINGTON – The overall context for looking ahead to what the incoming administration of president-elect Donald Trump might do is that there has been no overarching ‘Latin America’ policy under the outgoing administration. There have been pockets of activity – Cuba, Central America, the Colombia peace deal, to name but three – but in general terms the region has received little attention from the US over the past several years. Mexico aside, it barely featured at all in the presidential campaign. This overall situation will largely remain the same under the Trump administration.

NAFTA in the crosshairs

Of all Latin American countries, Mexico received most attention from the president-elect during the campaign, both in the context of immigration and trade policy. There is clear nervousness in Mexico and in the markets about the impact of the new administration on relations between the two countries. The Mexican peso fell close to 10% against the dollar as the result of the election came in, for example. Even in the event of a ‘benign’ administration with no renegotiation of NAFTA, Control Risks’ joint-venture partner Oxford Economics predicts a fall in expected growth for Mexico in 2017 from 2.5% to just over 2% on the back of the falling peso, rising inflation and greater fiscal pressure that uncertainty over Mexico-US economic ties will engender.

Why does it matter so much to Mexico? 80% of Mexican exports go to the US, and so campaign pledges to renegotiate or even tear up NAFTA cast a significant pall over the economy. It appears that, at a minimum, the new administration will use the threat of renegotiating or pulling out of NAFTA as a means of pressuring Mexico into accepting concessions over tariffs on certain products – chiefly manufactured goods, in the hope that American firms with facilities in Mexico will move elements of their supply chain back to the US. Mexico cannot afford to lose access to the US market and so would almost certainly have to accept a new deal, but the implications of that on the economy as a whole and Mexican domestic politics could be dramatic in the short term.

At a more practical level, a cooling-off period between the two governments is likely in terms of cross-border cooperation on immigration, security, anti-drugs operations and the like. Mexican hackles were raised during the campaign by Trump’s pledge that he would build a wall on the shared border and that Mexico would pay for it, and there is little incentive to cooperate with the incoming administration on that front. Nonetheless, in time, common interests in ensuring cross-border security are likely to prevail, but it will likely require significant behind-the-scenes trust and communication on both sides to ensure that progress is not lost behind potentially heated rhetoric from both countries on the immigration issue.

Security and migration in Central America

Central America is another region that has expressed concern over the impact of the new administration on trade ties, flows of aid and general cooperation on security and governance issues. The region, together with the Dominican Republic, has its own free trade agreement with the US, DR-CAFTA; the incoming administration’s protectionist instincts have raised local concern that any moves against NAFTA will presage similar treatment of DR-CAFTA. This seems unlikely, given that Central America’s primary exports to the US under the deal are low-value added products that are unlikely to create the jobs in the US that the new administration seeks. Nonetheless, Central American politicians will be watching Mexico-US developments closely for any sign of a knock-on effect.

US aid to Central America, particularly the ‘Northern Triangle’ countries of Honduras, El Salvador and Guatemala, has been a key prop for those countries, and they will be similarly anxious to avoid cuts to programs that are designed to tackle the root causes of immigration to the US – particularly, around domestic insecurity and the economic challenges facing each of those countries. In fact, given the new administration’s focus on slowing illegal immigration, these are the types of programs that could survive an otherwise swinging axe on foreign aid programs. The title of the program may change – to reflect a greater focus on security or anti-narcotics objectives, for example – but the end result in funding may not end up being too dissimilar.

Control Risks expects little change in overall US policy in South America. The president-elect expressed solidarity with the ‘oppressed’ people of Venezuela on the campaign trail, as a sign of his opposition to the increasingly authoritarian regime of President Nicolás Maduro, but the new administration seems unlikely to actively seek involvement in the political crisis there. In fact, overt statements in support of the opposition would likely backfire given how Maduro uses these to highlight ‘foreign’ interference to beef up his popular support. Nonetheless, targeted sanctions of individuals connected to the Maduro government, as has occurred under Obama, are likely to continue given a more hawkish Republican-led Congress.

In Colombia, in a rare act of bipartisanship, Obama was able to secure support from Congress earlier in 2016 for a new version of Plan Colombia – US funding principally for the anti-narcotics fight in Colombia – this time in support of the peace process. Although the ‘no’ vote to the peace deal between the government and the FARC in October has put peace on hold for the time being, US support to the Colombian administration will continue under that broad umbrella.

Finally, Cuba-US relations will undergo another transformation. The Trump campaign’s anti-Cuba rhetoric hardened as the campaign wore on, but Control Risks does not anticipate all the political and commercial openings pursued by Obama to be rolled back. Certainly, they may be ‘suspended’, on the grounds that Cuba has done little to reciprocate in terms of political and economic liberalization and improved human rights. However, Republican legislators (particularly from the mid-west) have been among the most active in pushing for greater trade relations with Cuba. Moreover, from a practical point of view, curtailing travel and remittances of Cuban Americans to and from the island would be a deeply unpopular move, regardless of Cuban Americans’ overall political allegiances.

So 2017 is likely to see significant verbal sparring between the US and Cuban governments. But 2018 remains the real game-changer, with Cuban President Raúl Castro due to step down from office. Without the symbolism of a Castro in the presidency, it will become much easier for Republican lawmakers to look to repeal the US trade embargo.

Simon Whistler is a Principal and leads the political risk practice for Latin America at Control Risks, the world’s leading political, integrity, and security risk consultancy.