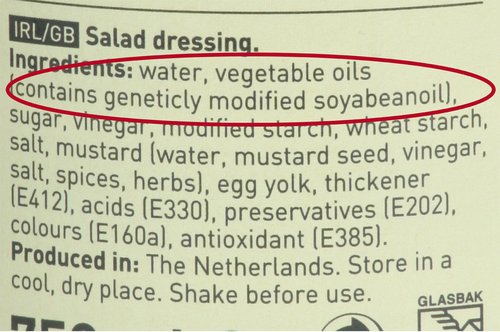 Will the US Push for Non-Labelling of GMOs in Trade Pact?

RE: WILL THE US PUSH FOR NON-LABELLING OF GMOs IN TRADE PACT?

The US is the world’s largest producer of GM crops and almost all of its soya and corn are genetically engineered. It therefore has a strong commercial interest in ensuring that GMOs are consumed and produced widely.

Commentators are worried that the US may be pressuring countries in the Trans-Pacific Partnership Agreement (TPPA) - an Asia-Pacific-wide free trade pact - to abolish the labelling of GM foods, which it regards as a trade barrier.

New Zealand, Australia, Peru, Chile and Malaysia are among the TPPA partner countries that already require the labeling of GM products in some form or other. Japan which has just announced its intention to enter into negotiations also has GM labeling provisions in place.

This likely push by the US government, has the influential biotechnology lobby behind it. The Biotechnology Industry Organization (BIO) has stated its view that the US Government should use the TPPA talks to proactively address and remove barriers to trade of agricultural products derived from biotechnology. For example, BIO’s comments on the accession of Malaysia to the TPP negotiations are available at http://www.bio.org/node/228

A briefing on the issue by the Sustainability Council, New Zealand, is available at http://www.sustainabilitynz.org/docs/RightToChooseGMFreeFoodandtheTPP_Nov2011.PDF

New Zealand’s genetic modification laws could be threatened as part of the Trans Pacific Partnership agreement, the Sustainability Council warns, and it wants assurances they won’t be weakened.

The broad outlines of the agreement are due to be unveiled by President Barack Obama at the Apec summit this weekend in Honolulu.

Much of the focus publicly has been on whether the operation of the Government’s bulk-drug buying agency Pharmac.

Besides saying the existence of Pharmac is not at stake, the Government is keeping its negotiating position confidential with Trade Minister Tim Groser admitting this week that the "tough stuff" had yet to be negotiated.

The Sustainability Council executive direction, Simon Terry, said there was no doubt the United States would line up with the US biotech industry which wanted to weaken GM laws as part of the TPP negotiations particularly weaken the law requiring labelling of GM foods.

"While US objectives are abundantly clear, New Zealand’s response is not," he said.

"If New Zealanders are to be assured of a continued right to know about the presence of genetically organisms in their food, then a clear commitment is required from potential future governments that negotiators will have no mandate to trade away‚ GM regulatory protections."

New Zealand also allows commercial production of GM crops but there have been no applications.

One of the diplomatic cables from the US embassy in Wellington and leaked by Wikileaks about a year ago, quoted New Zealand‚s top TPP negotiator, Mark Sinclair, as citing New Zealand’s genetically modified organisms regulations as being among the issues that could be an impediment to concluding an agreement.

The US cable noted Mr Sinclair had said foreign investment was always open to populist views in New Zealand.

On the campaign trail today, Prime Minister John Key said he "wouldn’t have thought" New Zealand’s current regime for GM was up for negotiation as part of the TPP talks.

"We‚ve got a well established process when it comes to GM. Applications have to go through the Environment Protection Authority. As far as I’m concerned that‚s not changing."

Stephanie Howard and Simon Terry are researchers for the Sustainability Council of New Zealand, a public good NGO.

Will losing the right to choose GM-free food be a price of the next and biggest free trade deal?

The United States has made clear that a priority for the proposed Trans Pacific Partnership (TPP) is the abolition of laws that require genetically modified foods to be labelled.

That puts New Zealand in its sights because of GM ingredients in food products must generally be labelled here.

Although there are exemptions such as highly refined oils and GM contamination below 1 per cent, New Zealand food companies and supermarkets have avoided ingredients in their products that would trigger the labelling and retailers essentially do not stock products tagged as GM.

Without the labelling law, New Zealanders who want to avoid genetically modified food would have to rely on the willingness of producers to declare such content - or a patchwork of independent testing.

Instead of it being the norm for food companies to strive to keep GM out of their products, this could become the preserve of niche eco brands.

The reason Washington wants to stamp out all mandatory labelling is plain: the US is the world‚s largest producer of GM crops and its soy and corn are now almost all genetically modified.

As more countries adopt mandatory food labelling regimes, US exporters must either secure market acceptance for GM products - or remove requirements that make them visible and avoidable.

While labelling underpins the ability to choose, and that choice is regarded as a consumer right in countries such as New Zealand, the US decries labelling as a "trade barrier".

Five countries in the free trade talks have mandatory labelling, and the US government and the biotech industry view the trade deal as an opportunity to bring Pacific Rim countries into line with US trade objectives. New Zealand‚s chief negotiator has identified its genetically modified organism regulations as one of "the top local impediments" to concluding a TPP agreement.

"It is well known", a diplomatic cable released by Wikileaks reports him saying, "that Monsanto does not like New Zealand‚s genetically modified organism regulations."

New Zealand‚s regulatory regime for genetically modified foods and organisms in the environment has been hard won.

The use of GM in food has been the most controversial and widely debated new technology of the last two decades.

That the country continues to avoid growing any genetically modified organisms for commercial production reflects sustained concern about the long-term consequences of taking the GM path and risks to the nation‚s brand in key export markets.

Washington knows this: US embassy cables repeatedly report that New Zealanders "do not readily embrace the technology" and "have tended to avoid such foods". The country‚s GM-free food producer status is increasingly becoming part of New Zealand’s identity, just as its nuclear-free stance defines it.

However, unlike the nuclear issue, which is no longer considered an obstacle to closer ties, there is no sign that the US is willing to overlook New Zealand’s GM policies.

While US objectives are abundantly clear, New Zealand’s response is not.

National has stated it does not propose to weaken the law governing environmental release of GMOs while Labour and the Greens propose additional protections. The separate labelling law also appears to be broadly supported - so it is not that the US is pressing for something that is waiting to happen on either count. The question is whether the incoming government will stand up to pressure from the US to weaken our law as a trade off in TPP negotiations.

As the deal does not need to be brought before Parliament before the text is set, New Zealanders are entitled to know now whether GM food labelling will be protected as a bottom line. If New Zealanders are to be assured of a continued right to know about the presence of GMOs in their food, then a clear commitment is required from potential future governments that negotiators will have no mandate to "trade away" GM regulatory protections.

Without that commitment, the ability to have a food supply essentially free of GMOs is on the block.

Giving A Bean About Genetic Modification

If Japan enters the Trans-Pacific Partnership (TPP), will domestic labeling of genetically modified products disappear? It is indeed possible.

Japan can prevent this, but if labeling does disappear, what will happen? We don’t know — and that is unacceptable.

Japan, along with South Korea, is one of the world biggest consumers of soybean products, with each person consuming an average of eight kilograms a year — far higher than the world average of two kilograms. Three-quarters of domestic demand is covered by soybean oil, which is used in such products as salad oil. Half of the remainder goes into tofu and deep-fried bean curd, while miso and soy sauce are next on the list.

A total of 94 percent of soybean products in Japan are imported. The biggest producer is the United States, which accounts for 71 percent of imports, and data from the Ministry of Agriculture, Forestry and Fisheries shows that genetic modification is applied in 93 percent of the areas where American soybeans are planted.

Why has the United States increased genetic modification to such a high level? Because through genetic modification, farmers can produce varieties that do not wither even if strong herbicides are applied, allowing them to efficiently harvest large crops.

So what is dangerous about genetically modified products? Well, they contain artificial proteins not found in nature, and it is possible that these proteins could cause allergic reactions. In actual fact, a genetically modified health product produced by a Japanese chemical manufacturer in the 1980s ended up causing health problems, and even death in the United States.

The U.S. says it will only produce safe products. But even if a certain product doesn‚t produce sudden health defects, is it safe to continue eating it over an extended period of time? Will it affect our children or grandchildren? Is it really the case that potent artificial products are less harmful than strong herbicides?

In light of such fears, people who are particular about food safety see the labeling of genetically modified products as essential — and I think they are right. However, biotechnology experts and firms, which argue that biotechnology can save people from starvation, say the people worried about labeling are too sensitive.

Genetically modified soybeans were first imported from the United States into Japan in 1996. Immediately afterward, the Ministry of Agriculture, Forestry and Fisheries, held a meeting of experts and asked them to consider the labeling of genetically modified products. Two proposals were put forward — one in line with the European Union, which would enforce labeling of all products, and one that limited the number of products requiring labeling. In 1999, Japan went with the plan that limited the number of products.

The reason Japan did not require labeling of all food products was that, as opposed to the European Union, there were no provisions between Japan and the United States to secure traceability of products. While citizens groups and some consumer cooperative societies have sought expanded labeling to match EU guidelines, the actual line of the TPP is to reduce or abolish labeling.

The U.S. offensive is strong, but who can guarantee the long-term safety of agricultural products that have been produced like industrial goods? While Japan relies on the U.S. for national defense, we cannot simply remain silent and follow it over this issue.