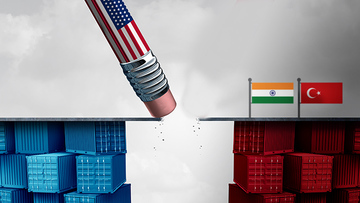 India opted out of RCEP and now it is Japan, who follows suit. After a long 7 years intensive negotiation among ASEAN 10 + 6 for the world biggest trade block to reign Asia-Pacific region and a challenge to TPP, RCEP ( Regional Comprehensive Economic Partnership) is in tailspin before launching. The reason is China’s over-influence in the block.

Japanese Deputy Minister for Economy, Trade and Industry Hideki Makihara, said in an interview with Bloomberg. “We aren’t thinking about that at all yet – All we are thinking of is negotiations including India.” India opted out because its main concerns were not addressed, which erupted in the wake of large influence by China. Now, Japan also refuses to join the block, presumably fearing Chinese fear with India leaving, since it weighed a collateral safeguard to Japan by countering China. Mr. Makihara was hopeful, saying “Japan will continue to try to persuade India to join.”

The silver line of the trade structure with two large trading partners is that while China’s rise in the rank was demonstrated by gushing exports to India, USA’s rank up was geared by importing more from India. This sent a message that FTA could be more beneficial with USA. Anecdotal evidences show that with whomsoever India engaged in FTAs, it had trade deficit.

Given this new emerging scenario of trade relation with USA, question arises should India focus on FTA with USA, which can provide a sustainable growth in export.

To this end, Commerce Minister Piyush Goyal’s endeavor to embrace new trade deal with USA is justified, despite several niggling issues. In US-India Strategic Partnership Forum, he decoded that both countries have agreed to broad contours of proposed trade packages, after closing the pending gaps.

Export has globally been recognized a strong parameter for world economic growth. To this end, India’s lackluster growth in exports has been lamented. India is the fastest growing economy in the world. Albeit, its export growth was sagging in post 2011. One reason is international trade still receives low attention, both in public and private sectors. Given export becoming a trigger to resuscitate the economy, government set a target of doubling exports by 2025.

This means India’s export should reach US $ 660 billion by 2025. Obviously, RCEP – the biggest trade block – should have been more potential to meet the target, given the fact that it has larger stake in India’s export. RCEP member countries account for one-fifth of India’s total export.

But, in terms of export growth , USA played more important role in stretching exports. Export to USA increased much faster than to RCEP countries, despite some members in RCEP already have FTAs with India. For example, ASEAN is the biggest component in RCEP. India entered FTA with ASEAN in 2011. Notwithstanding, India’s exports to ASEAN increased marginally by 2 percent over a period of eight years, as compared to increase by 50.8 percent to USA.

Against this backdrop , all said and done, USA provides more opportunities to India to expand export than RCEP. Then , why not go for FTA with USA.

USA has become crucial trade ally to India in recent years. A number of disputes broke out between USA and India, owing to Trump’s protectionism measures, such as suspending GSP scheme, castigating India’s high tariff on Harley Davidson motorcycles and raising objection to MEIS scheme in WTO. It alleged India’s export growth to USA was above the average growth level.

Delving in benefits of FTAs in between in between USA and RCEP , it is predicted that FTA with USA will reap more benefits for India. USA will be the first nation to have FTA , with whom India has a long term trade surplus.

Exports to USA attach greater significance in weeding out various domestic economic problems, which are shadowing the economy. Major items of India’s exports to USA are apparels, diamonds, marine products and footwear. A free trade agreement will open more opportunities for development of these industries which are labour intensive. This will pave the way for more employment opportunities , which is reeling under distress.

FTA with USA will have positive impact on India in the wake of US- China trade war. It will open more opportunities for market accessibility in USA , vacated by China due to high tariff. China is the biggest supplier of apparel and footwear, embracing 40 percent and 70 percent share in US market respectively. Cotton is the main component for US apparel market. Paradoxically, China is cotton deficient. It largely depends upon USA and India for cotton import. With the tariff hike retaliation against USA , cotton import by China has become more expensive from USA. This will leverage India’s scope for expanding apparel export to USA

According to a CII report, India will gain more potential to export intermediates to USA , owing to imposition of high tariff on import from China. These intermediates relate to defence and aerospace sector, vehicles, auto parts and engineering goods.

FTA will leverage US FDI in the country. With tariffs done away under FTA, FDI from USA will surge. Surge in FDI will open new opportunities for US technology transfer to India. India is heading towards a new manufacturing dynamism after digitization and automation. These industries require high technology and skilled manpower.

In a nutshell, FTA with USA will bolster its export, catalyze more employment opportunities by rejuvenating small scale industries and widening the scope for FDI in the country.