Rushed FTA between UK and India may pose big health threat
8-Aug-2022 New Food Magazine
A newly published report has outlined several recommendations for a safe trade deal with India, which it says if rushed could threatened UK pesticide standards and farming. 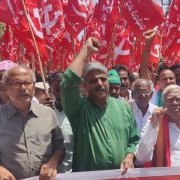 ’Mad rush to sign FTAs not in interests of farmers’
27-Jun-2022 Deccan Herald
India is inking a series of Free Trade Agreements but there is criticism from various quarters about it. All India Kisan Sabha Joint Secretary Vijoo Krishnan spoke about what is wrong with FTAs and where the government is erring.
India should keep dairy products out of all free trade pacts: Balyan
18-May-2022 Business Standard
As India plans to sign a slew of Free-Trade Agreements with several countries in the near future, milk and dairy products should never form part of any such trade deal to protect the interest of farmers, minister Balyan said.
No duty concession on 29.8% of India’s product categories under FTA with Australia
6-May-2022 CNBC TV
Some of the products India has kept in the exclusion category without offering any concession to Australia in the Free Trade Agreement include milk and other dairy products, walnut, chickpeas, pistachio nut, wheat, rice, most medical devices, etc. 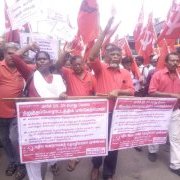 Farmer union rep vows Indian people will resist FTAs
29-Apr-2022 bilaterals.org
Interview with Vijoo Krishnan, joint secretary of All India Kisan Sabha (or All India Peasants Union) regarding current India FTAs negotiations.
Gabon ’greedy’ for investments from India: Minister Madiya
11-Apr-2022 Republicworld.org
Gabon is fast emerging as an investment destination for industries in sectors such as fisheries, wood, health, mining, infrastructure projects and tourism and they are using this greed to attract more Indian companies.
Australia-India Free Trade Agreement cheered by wine exporters and sheep farmers, but dairy and grain miss out
11-Apr-2022 ABC
Australian wine exporters and sheep farmers are among those who will see tariffs significantly reduced but the dairy and grain industries are calling for better deals.
Govt urged to adapt its approach to secure trade deal with India
5-Apr-2022 RNZ
There are calls for the government to adapt its strategy to reach a free trade deal with India - after Australia reached a deal with the nation.
India wants EU to start FTA negotiations, drop preconditions
9-Mar-2022 The Hindu BusinessLine
India is trying to persuade the European Union to come to the negotiating table to work out the contours of the proposed bilateral free trade agreement instead of putting in place numerous preconditions for starting the talks. 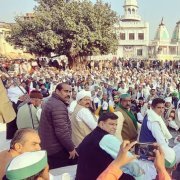 An India-UK trade deal could mean a race to the bottom for Indian workers
1-Feb-2022 New Internationalist
On farmers and food, vaccine inequality, climate justice and digital rights, we need to act in solidarity – and not allow trade rules to sacrifice people to corporate profit.
India, UK kick off FTA talks, will avoid ‘sensitive issues’
14-Jan-2022 The Indian Express
Bilateral trade between the countries is worth about $50 billion per year. Commerce Minister Piyush Goyal said both countries had agreed to avoid “sensitive issues” and focus on areas where there is more complementarity.
Will oppose any move to throw open dairy sector to Australia: BKU
12-Jan-2022 The Hindu
Indian farmers will oppose the Comprehensive Economic Cooperation Agreement (CECA) between India and Australia if it throws open the country’s dairy sector for Australian dairy majors.
India to allow in imports of US pork and products, US officials say
11-Jan-2022 Reuters
India has agreed to allow imports of US pork and pork products into India, removing a longstanding barrier to US agricultural trade.
India to keep sensitive dairy, agri items out of FTA with Australia
10-Jan-2022 The Hindu Businessline
India is keeping sensitive dairy and agriculture items out of the India-Australia free trade agreement (FTA) as it does not want to compromise the interest of its farmers.
India-EU FTA talks likely in September but no resolution yet on linking of investments, GIs
27-Jul-2021 The Hindu Businessline
India and the EU are likely to begin negotiations on the revamped proposal for a bilateral FTA in September but there continues to be disagreement on whether to carve out separate agreements on investment protection and geographical indications (GIs).
Dairy players oppose free trade pact with EU
29-Mar-2021 The HIndu Business Line
Even as the Centre is inching closer to sign a Free Trade Agreement (FTA) deal with the European Union (EU), India’s dairy sector has flagged some concerns involving livelihood scores of Indian farmers.
Won’t say cheese: Dairy industry frowns as FTA with EU nears closure
25-Mar-2021 The Indian Express
After successfully blocking milk product imports from New Zealand and Australia under the Regional Comprehensive Economic Partnership (RCEP) agreement, the Indian dairy industry is mounting similar pressure vis-à-vis a free trade deal with the European Union (EU).
Can an Australia–India FTA succeed where RCEP failed?
8-Mar-2021 East Asia Forum
Having secured free trade agreements (FTAs) with almost all key trading partners, Australia is honing in on a long elusive but lucrative market — India. Tensions with China, the need to find new sources of economic growth and government policy to diversify trading partners are pushing Australia into India’s arms.
Kerala: Farmers demand that Centre withdraws from ASEAN agreement
24-Feb-2021 Newsclick
Farmers from Kerala marched to the regional office of the Rubber Board, demanding that the Centre withdraw from the ASEAN free trade agreement. 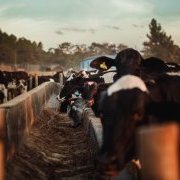