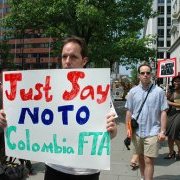 Oppose the US-Colombia FTA petition
20-Jul-2007 http://www.ipetitions.com/petition/...
The following letter was sent to members of the US Congress on April 23, 2007, with the signatures that appear to the right, under Petition Sponsor. Now it is your turn to add your signature to express your support of this letter and your opposition to the US-Colombia Free Trade Agreement. The petition with fresh signatures will be sent to members of the US Congress before the final ratification vote.
Canadian and Colombian labour jointly reject trade talks
18-Jul-2007
In a joint statement, the largest labour federations in Canada and Colombia reject the announced trade negotiations between Canada, Colombia and Peru as “an extreme free-market trade and investment model which guarantees the rights of investors over the human, social, economic, cultural and labour rights of its citizens.” 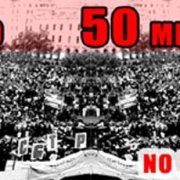 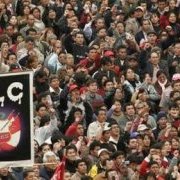 Peruvian trade union protests and strikes continue
14-Jul-2007 Granma
Despite threats of military repression by the government, activists said today they would continue the general strike called by the General Federation of Peruvian Workers, which is demanding a better distribution of wealth. Likewise, the National Agrarian Federation will continue its protest against a free trade agreement with the United States.
Faeldon wants to sue officials responsible for JPEPA
13-Jul-2007 Ellen Tordesillas
A Philippine Marine captain on trial for the failed 2003 Oakwood mutiny wants to file graft charges against officials involved in the forging of the controversial Japan-Philippines Economic Partnership Agreement (JPEPA).
APRN strategy workshop on FTAs
13-Jul-2007
The Asia Pacific Research Network (APRN) and AID/WATCH are pleased to invite you to a strategy workshop on the FTAs entitled: “To Oppose FTAs: Making People Matter”, that will take place on September 4-6, 2007 in Sydney, Australia. The Strategy Workshop on the FTAs is an open and public gathering of trade campaigners within the region specifically timed to coincide with the APEC Leaders’ Meeting in Sydney.
Peru unions strike US trade deal
11-Jul-2007
The Peruvian National Federation of Mining and Metallurgical Workers announced that they will adhere to the general strike of state teachers demanding salaries and against the Free Trade Treaty (FTT) with the United States.
International protest letter against the arrests of co-chairs of KoA
4-Jul-2007
On Tuesday, July 03, 2007, two Co-Chairs of the Korean Alliance against the Korea-U.S. FTA, Oh Jong-ryul and Jung Gwang-hoon, were arrested on charges of carrying out ’illegal’ and ’non-permitted’ protests against the free trade agreement between US and Korea. We call upon individuals and organziations to endorse this protest letter by 13 July 2007.
Peru: trade pact approved amid protests
3-Jul-2007 WW4 Report
On the evening of June 26, hundreds of people vigiled in Lima, Peru, to protest the efforts of the ruling Aprista party majority in Congress to push through the "addenda" of a free trade treaty between the US and Peruvian governments.
Tens of thousands protest signing of the Korea-US FTA
2-Jul-2007 Official News of the Korean Alliance Against the Korea-US FTA
On June 29, tens of thousands of farmers, workers, and ordinary Korean people gathered throughout the country to protest the signing of the Korea-US FTA. Protests were held in major cities including Seoul, Cheonju, Gwangju, Daegu, Pusan and Changwon. In total, roughly 50,000 gathered in a powerful display of opposition to the Korea-US FTA. 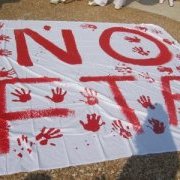 Koreans at the first US Social Forum sign anti-FTA resolution
1-Jul-2007 KAWAN
Koreans from all over the U.S. and abroad at the first ever U.S. Social Forum marked the official June 30 signing of the Korea-U.S. Free Trade Agreement (FTA) with an “anti-FTA signing ceremony”. Leaders of people’s movements from Korea and the U.S. spoke out against the devastating consequences of NAFTA-style free trade. 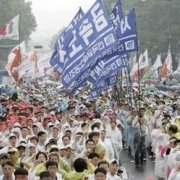 S. Korea hit by massive protests against FTA with US
30-Jun-2007
Tens of thousands of workers and anti-US activists rallied Friday in central Seoul in monsoon rains to oppose a free trade agreement (FTA) between South Korea and the United States.
Stop the EPAs, Oxfam, Panos tell African leaders
29-Jun-2007
Social movements across the African Continent have started arriving in Accra for the 9th Ordinary Summit of the African Union, scheduled for July 2-3, 2007.
Panamanians protest US trade deal
29-Jun-2007 Prensa Latina
Groups of students, professionals, and unions in Panama are protesting the signing Thursday of a free trade agreement with the US, for considering it an affront to the country s sovereignty and dignity. 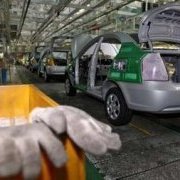