Costa Rica to ask for US trade delay
29-Jan-2008 AP
President Oscar Arias said Tuesday he will ask the US to delay implementation of a free-trade agreement to give the country time to pass several necessary local laws.
Costa Rica, China begin talks on free trade
10-Jan-2008 New Post India
A Chinese business delegation is in Costa Rica to explore the possibilities of a bilateral free trade agreement. The feasibility study would take at least six months.
Costa Ricans countdown on free trade with US
9-Jan-2008 Periodico 26
The Costa Rican Congress resumed discussion Monday on the complementary agenda required by March 1 for implementation of the Central American-US Free Trade Agreement (CAFTA-DR). Of the 13 bills needed, only 2 have been approved so far.
Legislators pass first CAFTA law
28-Nov-2007
The law, one of the least controversial of the 12, regulates the relationship between foreign companies and their representatives in Costa Rica.
Costa Rica signs DR-CAFTA agreement
24-Nov-2007 Dominican Today
The DR-CAFTA free trade pact between the Central American countries, the Dominican Republic and the United States was signed into law in Costa Rica on Wednesday amid protests and a large military deployment.
CAFTA Becomes Law in Costa Rica
23-Nov-2007
Costa Rica’s president on Wednesday signed into law a free trade agreement with its Central American neighbors, the United States and the Dominican Republic.
Referendum about CAFTA: Declaration of “Mujeres del NO”
15-Nov-2007 FIRE
As feminists we have always said NO to rape and therefore we cannot but say NO to this gang rape of our collective freedom to choose what treaties we accept. 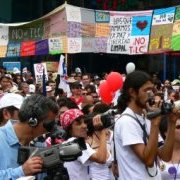 Results: The power of NO
15-Nov-2007 FIRE
Hundreds of women came together to celebrate women’s contributions to the struggle against the ratification of CAFTA in Costa Rica
Human rights body uneasy about impacts of CAFTA-DR in Costa Rica
6-Nov-2007
As furore continues in Costa Rica about ratification of the Central American Free Trade Agreement (CAFTA-DR), members of a leading UN human rights body have been expressing their concern to Costa Rican officials today in Geneva, about the human rights impact of the trade agreement.
Letter to US Congress requesting rejection of the 7 October referendum
5-Nov-2007
Letter from Costa Rican citizens to US Congress requesting rejection of the alleged approval of CAFTA through the 7 October referendum
Costa Rica: CAFTA threatens to turn water into merchandise
4-Nov-2007 LP
Free trade agreement will make water distribution more unequal for country’s poorest communities. The pact sets the obligation to give a “not less favorable” treatment to US companies, ignoring the deep differences in size and economic power of between these ones and the national sectors.
CAFTA referendum heightens social tensions in Costa
3-Nov-2007 Workers World
The NO to CAFTA campaign has produced tens of thousands of activists who are using grassroots methods to change the political system in Costa Rica, which has been dominated by a small elite since the founding of the country.
Costa Rican lawmakers debate FTA law
31-Oct-2007 Prensa Latina
The Board of the Costa Rican Legislative Assembly admitted that it is studying 943 of 1,097 motions against one of the implementation laws of the Free Trade Agreement with the United States which poses danger for Costa Rican farmers and biodiversity
Costa Rica: It’s more than just the numbers
30-Oct-2007 Alliance for Responsible Trade
Just over half way through the stipulated time period before certification of the referendum on CAFTA will take place, a meticulous counting of every vote is happening in front of TV cameras, accompanied by a detailed accounting process. For the uninitiated, this provides the illusion of squeaky transparency; how could there be voter fraud here? However, the fraud was committed long before the voting even started - and so far, there is no institution or mechanism willing to name that.
Costa Ricans to strike against FTA
27-Oct-2007 Prensa Latina
Trade unions from the Costa Rican Electricity Institute announced a strike against the complementary agenda of CAFTA, so that the company continues to govern in the fields of electricity and telecommunications.
Fear and voting in Costa Rica
26-Oct-2007 FPIF
Costa Rica’s recent referendum was supposed to decide once and for all whether that country should enter into the Central American Free Trade Agreement (CAFTA). Instead, the Oct. 7 vote polarized and politicized this small country of four and a half million people more than anything since neighboring Nicaragua’s war between the Sandinistas and the Contras two decades ago. And even though supporters of the treaty prevailed by a slim margin, CAFTA opponents still have a few cards to play and may yet block its implementation.
China, Costa Rica to begin FTA process
26-Oct-2007 China Daily
China and Costa Rica said they will conduct a feasibility study on a free trade agreement — four months after the two established formal diplomatic ties.
Free Trade undermining democracy in Costa Rica
25-Oct-2007 Alliance for Democracy
Democracy in Costa Rica was undermined after several violations to costarrican law.
Costa Rican court confirms approval of US free trade pact
23-Oct-2007 IHT
Costa Rica’s top electoral court confirmed the results of an Oct. 7 referendum on a free trade agreement with the United States, saying a recount showed the ’yes’ votes only slightly lower than preliminary results had indicated.
Costa Rica’s CAFTA “Si” vote called into question
13-Oct-2007 Upside Down World
While free trade proponents cheered, opponents called foul in Costa Rica’s 51.5 percent vote Oct. 7 in favor of ratifying the Dominican Republic-Central American Free Trade Agreement (DR-CAFTA).
0 | 20 | 40 | 60 | 80 | 100 | 120 | 140 | 160 | 180
Subscribe to bilaterals.org weekly