India-US bilateral trade disputes at multilateral IPEF? USTR’s meeting triggers alarm in Delhi
24-Jun-2022 The Print
An 11 June meeting called by USTR Katherine Tai discussed ’launching negotiations under trade pillar’, sparking fears among Indian officials that IPEF could end up as a trade agreement.
China floats BRICS free-trade deal, while Russia’s Vladimir Putin calls for an alternative to US dollar
24-Jun-2022 Yahoo Finance
China has proposed a free-trade bloc among the five BRICS countries in a bid to enhance economic ties within the decade-old grouping, as its geopolitical rivalry heats up with the United States.
US poised to escalate claim Mexico violated free-trade pact
24-Jun-2022 Bloomberg
The US is preparing to escalate its complaints that Mexico’s state-favoring energy policies violate the nations’ free-trade agreement.
Brexit: unilateral action on NI protocol ‘not conducive’ to trade deal, warns US
23-Jun-2022 The Guardian
The US government has warned that Boris Johnson’s move to unilaterally axe some of the Northern Ireland Brexit arrangements protocol was a matter of continuing concern and “not conducive” to a trade deal.
Taiwan, US to talk trade within days
20-Jun-2022 Taipei Times
The two sides would focus their negotiations on 11 areas, including trade facilitation, regulatory practices, standards, state-owned enterprises, nonmarket policies and practices, and countering corruption.
Kenya, US revisit trade talks, agree to expedite process
20-Jun-2022 The Star
US is pushing for favourable terms among them a duty free market access for its goods, including agricultural and industrial, in a move aimed at taming the growing dominance of China’s trade with Kenya.
Why the US’ Indo-Pacific Economic Framework is really all about India
17-Jun-2022 South China Morning Post
The framework is another attempt to bring India into the Western fold while positioning it more strategically in the Indo-Pacific trade network
US analyzes excluding Nicaragua from CAFTA for exchange with Russian troops
15-Jun-2022 Q
Joe Biden’s government is analyzing the possibility of launching "strong measures" against Managua at the invitation of external armies, especially "one that has invaded another country," says a US official.
Oceana filing under USMCA on right whales moves forward, could open US to trade restrictions
14-Jun-2022 Seafood Source
A filing made by non-governmental organization Oceana claims the US is not holding up its environmental laws regarding the protection of endangered North Atlantic right whales is moving forward.
14 nations hold informal IPEF ministerial meeting
13-Jun-2022 Nippon.com
US Trade Representative Katherine Tai convened an informal ministerial meeting of the Indo-Pacific Economic Framework partner countries. 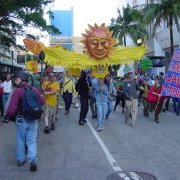 Latin American leaders should stand up for people, not corporate profits
10-Jun-2022 Inequality.org
As leaders gather in Los Angeles, a reflection on the past two decades of battles against neoliberalism and for a more just and equitable alternative in the Americas.
Taiwan appeals to US not to forget its desire for free trade deal
8-Jun-2022 Reuters
Taiwan’s top trade negotiator appealed to the United States not to forget that the island wants a free trade deal, but understands this will not happen immediately and is willing to make other agreements first as "building blocks".
‘Indo-Pacific Economic Framework’ not a blessing to Asia
7-Jun-2022 Daily Times
The US has been trumpeting that its IPEF will bring prosperity to the region. But its sole purpose is to advance the “Indo-Pacific Strategy” and key interests of the U.S. instead of driving post-pandemic recovery, development and prosperity of the region.
Taiwan and US to launch trade talks
3-Jun-2022 Taipei Times
Taiwan and the US announced that they would commence negotiations on a new trade agreement, signaling a breakthrough after Taiwan was excluded from a US-led regional trade framework.
India sees a second chance to pivot to the Indo-Pacific in new group that excludes China
2-Jun-2022 CNBC
Except for India and the US, all other nations in IPEF are part of the RCEP rival bloc. India’s aversion to a pact which includes China has geopolitical considerations at its root.
UK, Texas and other US states should proceed carefully, but not abandon, trade deals
2-Jun-2022 IELP
These agreements are not legally binding and do not create any legal, equitable, or financial rights, obligations, or liabilities for the participants.
US looks beyond delayed free trade deal in commercial ties with Kenya
31-May-2022 Business Daily AAfrica
The US government and Kenya early this month held a round of trade talks, which raised hopes of a fresh direction after the Biden administration froze Trump-era negotiations on the free trade agreement.
Competing US, Canadian strategies in the Indo-Pacific
30-May-2022 CCPA
Minimum core labour standards appear to be a first principle of the US’ IPEF whereas Canada has already signalled to the Indonesian government that worker rights are negotiable in its Indo-Pacific trade deals.
Taipei, US plan trade talks: sources
30-May-2022 Taipei Times
The talks came after the US announced that Taiwan would not be a part of its IPEF, after some of the participants said they feared retribution from Beijing
Indo-Pacific Economic Framework seeks to protect US, not Malaysian, interests
30-May-2022 New Straits Times
The Consumers’ Association of Penang is extremely concerned over the announcement by Senior Minister of International Trade and Industry that Malaysia will join a new economic agreement led by the United States.
0 | 20 | 40 | 60 | 80 | 100 | 120 | 140 | 160 | ... | 5900
Subscribe to bilaterals.org weekly